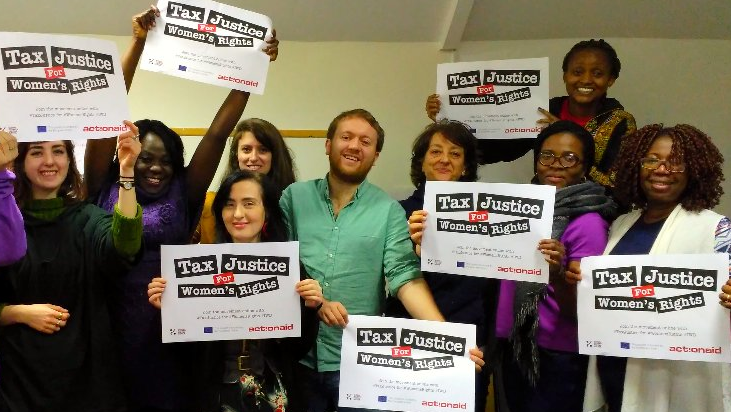 African activists tour UK to speak out for tax justice

The March 2017 tax tour was part of the Even It Up! and Make Tax Fair campaigns, organised by Oxfam and Action Aid, whose aim is to create awareness around the importance of tax justice and how this ties with the issues of inequality and the ability of developing countries to meet their developmental agendas through harnessing of all available resources. Taxation remains a key revenue resource mobilization tool for many countries across the globe.

Onyinyechi from Nigeria, myself and Sharon from Zambia, embarked on a two week journey through the UK and Ireland, speaking with Members of Parliament, members of the press, Students and citizens across different cities about why tax justice is an important issue, not just for developing countries, but for all countries. We told our stories. It is important to do so because the connection between taxation, poverty and inequality is not always clear. It is not a straight line, or a linear or obvious link. It does not necessarily lend itself to being an interesting conversation either! We told our stories still, stories from the Nile Delta in Nigeria to Lusaka Zambia and Turkana in Kenya. Heart-breaking stories, uplifting stories, inspiring and eye opening stories.

Facts of how tax evasion has destroyed communities and left others far worse than it found them in the quest for extraction of precious oil or metals were shown; pictures of how communities lack access to basic services like hospitals, schools, good roads, accounts of women and children dying because of lack of these services were shared, descriptions of the culpability of multinationals and governments in allowing for enormous illicit flows out of these countries laid bare; demonstration of youth and women mobilizing to holding governments and multi-nationals accountable given and  action  of structures that have been put in place to ensure fair tax regimes expounded.

It was clear that there was a need to keep illustrating the linkages about tax and the need for tax justice to bring about fairness in resource distribution, equality and the attainment of human rights. Taxation therefore is not just a technical issue that should be left to tax experts and technocrats; it is an issue that should be of concern to all citizens.

The first link between taxation and women discrimination has to do with the level of public revenue. When the state does not collect sufficient revenue, the first line of cuts tends to be on essential services, which affects women the most. [1]

Secondly, each year, developing countries are estimated to lose over US$100 billion to tax avoidance by big businesses and US$138 billion more by giving big businesses tax breaks. This lost revenue could have been used to provide public services–like clean water, free education, nursery schools, and adequate sexual and reproductive healthcare –that are critical for securing women’s rights[2].

Finally, as noted by Righting Finance, “[T]ax structures frequently discriminate against women directly or indirectly, for example by assuming women’s income to be supplemental to their household. This actively disincentivizes wage-earning and therefore could reduce participation in the labour market by women, potentially threatening their right to work.”[3]

Still the issue of tax justice as a women’s rights issue has not been given the attention it deserves.  The Global week of action on Women’s Rights seeks to begin to correct this and place the tax justice agenda on various global platforms and agendas. From the United Nations to the various countries involved in the Campaign, letters of petition have been sent to the relevant local and international organizations dealing with tax and women’s rights issues and campaigners continue to mobilize in country and internationally to speak out about tax justice.

My dear father often speaks, and quite fondly at that about Edinburgh – where he studied for his Master’s Degree in Literature. Fast forward several years later, I had no idea that the recent tax tour organized by Oxfam and Action Aid would have me land in Edinburgh, and rekindle fond memories of Edinburgh told through my dad’s stories. It is like I had been there before, having been carried there through his vivid descriptions of Scotland’s beautiful castles and ice=capped mountains.

As we snaked through the beautiful UK countryside through Edinburgh, Oxford, Cardiff and Nottingham, it was clear to me that the fight for tax justice was far from over, we were however very well on the right track in creating the much needed awareness to make it an important enough issue on the global platforms- to get people from all around the world involved in the quest for fairer and more equitable taxation and resource distribution regimes. The advocacy work around tax justice needs to advance to the next level of policy design and implementation to ensure engendered, transparent and accountable tax regimes across the globe.