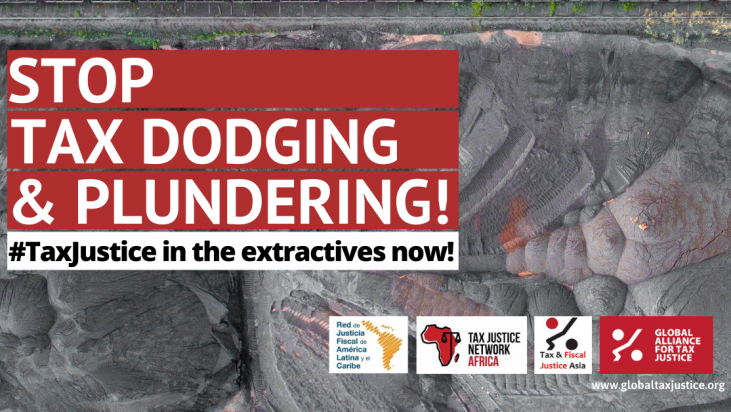 To celebrate our first Global Day of Action for #TaxJustice in the Extractive Industry,we are delighted to publish a blog written by Daniel Mulé, a Senior Policy Advisor for Tax and Extractive Industries at Oxfam!

“In the wake of the Panama Papers, Paradise Papers, and other tax scandals linked to the world’s largest companies, tax justice is in the spotlight, literally. Around the world, governments are hard-pressed to find the revenues for delivering critical public services without resorting to taking on vast debt or levying regressive taxes on those least able to pay. Nowhere is this problem more pronounced than when it comes to oil, gas, and mining.

The extractive industries rely on finite, non-renewable resources. Because these resources are exhaustible, the public only has one shot to get a good deal and maximize their value. But getting this deal right is complicated. Commodity prices are notoriously volatile; project-specific fiscal regimes come with a variety of significant government payments beyond corporate income tax, such as royalties, bonuses, and profit oil; negotiations are often done behind closed doors; and companies can take advantage of information asymmetries and any gaps in public-sector knowledge or experience.

Mining, oil, and gas deals are also extremely important to the  “resource-rich” countries of the Global South – including Ghana, Zambia, and Peru. In these countries, the extractive industries represent a significant portion of GDP, comprise large shares of national exports, and tax revenues from these sectors is critical for helping governments cover the cost of delivering public services.

To complicate matters, resource extraction often proceeds with huge expectations around improved public investments, better services, and higher rates of development.  Unfortunately, the benefits don’t always add up in practice.  Many countries fall victim to the so-called “resource curse,” seeing their natural resource reserves decline without seeing a commensurate benefit for citizens and communities. Countries rich in resources like South Africa, Brazil, Mozambique, Mexico, Zambia, Bolivia, and Sierra Leone also rank amongst the most unequal countries in the world according to various UNDP metrics, and inequality serves as a significant downward drag on the human development index (HDI) scores for many resource-rich countries including Nigeria, Chad, and Angola.

The river Lurio borders the provinces of Cabo Delgado and Nampula in Mozambique. Tineke D’haese/Oxfam

Many resource-rich countries are not doing enough to tackle inequality, as Oxfam’s Commitment to Reducing Inequality Index shows. In West Africa, a region endowed with oil, gas, and a variety of minerals, an estimated $9.6 billion in public revenues are lost annually through corporate tax incentives, and many citizens live under governments that are among the least committed to tackling inequality via quality education, healthcare, social protection. Nigeria, Africa’s largest oil exporter and the 9th in the world, ranks last among 157 countries on its commitment to reducing inequality.  Worse still, recent studies suggest that even the prospect of resource wealth may lead to adverse outcomes including reduced economic growth, as in the case of Uganda or Mozambique.

Oxfam and its partners have increasingly sought to better understand the timing of scale of revenues that can be expected from extractives projects, including by using financial models to analyze emblematic cases and by assessing risks to revenues.  In concert with the work of our Publish What You Pay allies, these cases also help to explain how governments that fail to effectively tax extractive revenues are at-risk for falling into the resource curse trap.

What can be done to fight this phenomenon? To ensure that mining, oil, and gas development results in positive impacts for people in the places where extraction occurs, we need to put the power back in the hands of the people.

First, tax justice must be a critical part of the informed right to decide about when and under what terms resource extraction occurs.  Extraction should only proceed where there is an informed decision by citizens and (critically) local communities to extract.  Informed decision-making must involve a public process that allows communities the opportunity to be consulted and provide consent, but it also must involve a clear understanding of the true costs (including adverse environmental impacts and potential violations of human rights) and realistic benefits the project will provide to citizens and communities, including the fiscal benefits. That understanding requires transparency.  Mining, oil, and gas contracts should be made public, as both the Extractive Industries Transparency Initiative and the IMF now recognize as a global norm, and the payments EI companies make to governments around the world should be disclosed. There are some signs of progress. The effectiveness of existing mandatory disclosures requirements for companies listed on stock exchanges in Canada, Norway, and European Union sets a solid precedent not only for strong disclosure rules for US-listed companies and those in other jurisdictions, but also for public country-by-country reporting of taxes and payments more broadly.

Second, rather than allowing corporations to rely on aggressive tax avoidance strategies, citizens and the tax justice movement must push multinational EI companies to embrace transparency and adopt responsible tax practices and fight for a fairer global tax system. EI companies should improve their performance on tax: adopting a transparent and responsible tax strategy; adopting a contract disclosure policy; aligning tax payments in the jurisdiction where company operations occur; renouncing the use of tax havens; ensuring board of directors’ endorsement and accountability for corporate tax policy; making tax payments to governments transparent and publicly available; and disclosing and explaining contract-specific and project-specific tax incentives. But we also need to make sure the rules of the game aren’t rigged against transparency and effective tax collection. Unfortunately, the current OECD efforts to address tax base erosion and profit shifting by redefining taxing rights (“BEPS 2.0”) – answering the critical questions of how much tax should a company minimally pay and where exactly it should pay it – has thus far been disappointing.

Third, citizens and the tax justice movement should push governments to combat both tax incentives and corporate tax avoidance.  In addition to endorsing the payment and contract transparency, governments should evaluate EI projects, using economic analysis, both upfront and on a regular basis.  Where tax incentives are overly generous and don’t serve the public interest – as is too often the case in the extractives sector – they should be reconsidered. Governments should also ensure effective project oversight and fiscal administration from the outset and throughout the life of the project to ensure that the prospective fiscal benefits of the deal are realized. To do that, governments need to effectively monitor price, production, and costs of key projects, which requires experts with knowledge of mining or hydrocarbons in addition to knowledge of tax. It also requires a sound risk management strategy, strong intra-governmental coordination (especially across resource ministries, and finance ministries, and tax authorities), and well-defined and well-utilized rights to audit. Importantly, governments should also seek to fight corruption – too often linked to natural resource deals – and hold corrupt actors accountable. And all of these government functions should be subject to strong oversight, including by supreme audit institutions and legislatures, but also by the public.