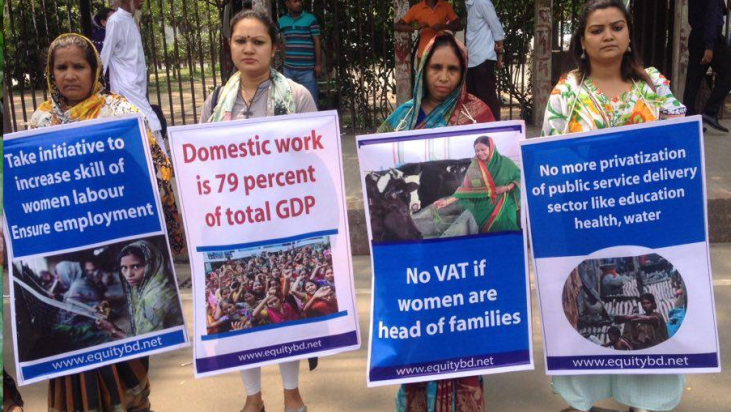 On the 10th of December 2017, we mark the close of this year’s 16 Days of Activism against Gender Based Violence which coincides with International Human Rights Day. This year has been a watershed moment for exposing the pervasive and systemic nature of sexual violence that is perpetuated against women and girls as shown by the #MeToo movement. From the USA to France, India to Italy, linguistic variations in the #MeToo movement’s theme has driven international momentum. Everywhere, the underlying message is the same: sexual violence perpetuated against women and girls is universal and, dishearteningly, way too commonplace.

For millions of women and girls in the Global South and beyond, their everyday realities of sexual violence have not been made visible on social media platforms. Women who lack the power and privilege to speak out – migrant women, older women, disabled women, women who are trafficked and sold into slavery, lesbians, transgender women – women who are in effect invisible, also have the right to have their voices and needs heard.

What’s tax got to do with it?

Tax policy is a fundamental tool for reducing gender inequalities. However, the power of progressive tax policies to deliver women’s rights is often overlooked by policymakers and women’s rights activists. Globally, one in three women directly experience gender-based violence in their lifetime, and almost half of all women who are murdered are killed by intimate partners or family members.

For women and girls who experience sexual and gender-based violence, public services that provide vital health, psychosocial and legal assistance are key. Tax pays for all of that. Tax also pays for services that improve women’s safety in public places, including providing better policing, secure public toilets, and street lighting designed with women and girls’ needs in mind. To this end, gender-responsive budgeting – which ensures that tax revenues are raised progressively and spent in ways that promote gender equality – is absolutely essential.

In addition to addressing women and girls’ practical needs, progressive tax policies can also help challenge the power structures which continue to subordinate them. Therefore, governments need to strengthen their political commitment and support to fiscal policies that provide adequate tax revenue for the implementation of global, regional and national-level policies committed to eliminating all forms of violence against women and girls.

Our current global tax system enables the pervasive use of harmful tax practices, illicit financial flows and tax avoidance by multi-nationals and wealthy individuals.  This makes it difficult for governments to raise enough tax revenue to pay for the public services that provide vital social protection for women and girls. Alongside the global trend towards fiscal austerity, governments are likely to opt for easy to implement but highly regressive tax policies which then disproportionately impact the very women and girls whose needs must be addressed. Regressive tax systems can entrench women’s heavy and unequal burdens of unpaid care work by saddling them with added responsibilities when public services are cut. This, in turn, further reproduces gender stereotypes and women’s subordinate place in the home, the workplace and in broader society. Regressive tax systems also contribute to women’s continued economic impoverishment thereby making it even more difficult for some to escape from cycles of violence.

What can be done?

Putting a stop to this violence is an enormous task, as gendered social norms do not simply disappear when governments change. Patriarchal norms can undermine, subvert and ignore women’s rights –leaving services which respond to and seek to prevent and mitigate violence against women and girls chronically underfunded, or not funded at all.  Progressive tax policy and tax transparency is central to resourcing the solution and shifting power.

Critically, there is a need to demystify tax policy and make it more accessible within the women’s rights movement. As part of the first step in trying to bridge siloes, women’s rights organisations, including those working on ending violence against women and girls, can sign up to the Bogota Declaration on Tax Justice for Women’s Rights. Launched during the 16 Days of Activism in 2017, the Declaration promotes a better understanding of how progressive tax policies can advance women’s rights. Organisations are invited to sign up here.