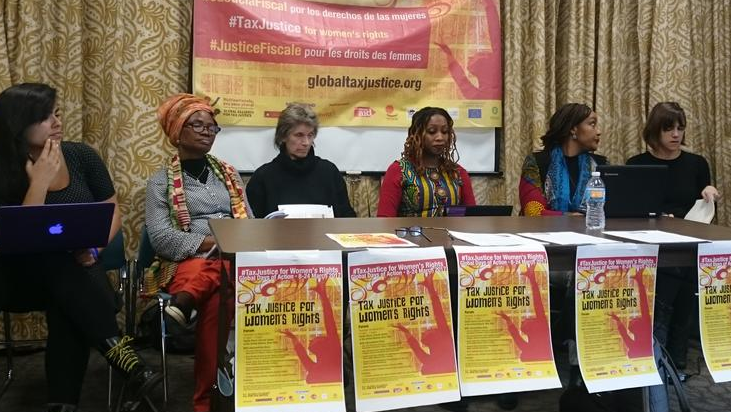 *This special blog post for the #TaxJustice for Women’s Rights Global Days of Action has been contributed by contributed by Liz Nelson, a director of Tax Justice Network.

Collateral Damage: Financial secrecy and impact on the human rights of women

It’s little understood that financial secrecy has a devastating impact on the rights of women. The Global Days of Action for #TaxJustice for Women’s Rights (8-24 March) an initiative by the Global Alliance for Tax Justice and partners including ActionAid, AWID, CESR, Christian Aid, Oxfam, Tax Justice Network and the Global Unions, seeks to change that, and to highlight the many tax justice issues which make women’s lives harder and deprive them of opportunity and basic freedoms. The campaign coincides with the United Nations Commission on the Status of Women (UNCSW) meetings in New York 13-24 March.

Women represent over half of the world’s poor and they are some of the least socially protected people in society. Women shoulder the burden of care work, often the unseen, unthanked substitutes for public services.

During UN CSW sessions held in New York in March 2017, a powerful picture was painted of women’s rights denied because of the absence of public services, of essential infrastructure, and because of a globalised environment where private interests dominate.  The obligations of states to provide basic human rights – the right to clean water, the right to health, to education, freedom of movement and so on – all are impacted by tax revenue losses because of corporate profit shifting and other accounting techniques.  Secrecy jurisdictions and the financial instruments they offer are key  in ‘hiding’ illicit finance.

When it comes to tax evasion and avoidance, the principle tactic in successfully hiding money from tax authorities is secrecy. And secrecy is delivered in many ways; through anonymous companies, under carefully designed jurisdictional legal frameworks and arrangements (See Switzerland/CEDAW), by jurisdictions resisting and cherry picking with whom they are prepared to share tax information and through the criminalisation of whistleblowers. All this facilitated by an army of enablers and intermediaries.

As countries increasingly seek to adopt registers of beneficial ownership of companies, we should not forget trusts. The Tax Justice Network recently published a paper called called ‘Trusts-Weapons of Mass Injustice.’ Trusts have one central defining purpose: to provide an almost impenetrable level of secrecy that ‘shields’ assets from regulatory bodies and governments. Countries need to adopt legal and regulatory powers that require a public registry of trusts, so that revenue authorities can understand who benefits from them, and we can all know the scale of the issue.

During the tax justice and women’s rights session at UN CSW61, women’s rights advocates testified both about the grinding daily life issues and the rights that should be afforded to all women. It is now time for the world to take on some of the instruments of financial secrecy if we are to truly achieve tax justice to deliver fundamental rights for women.