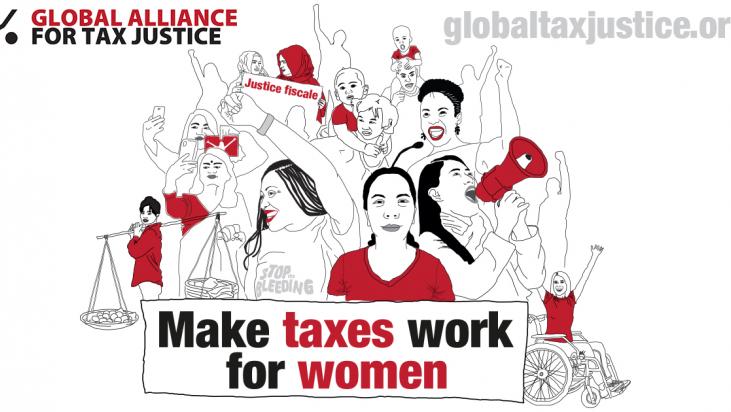 Introduction
The Global Alliance for Tax Justice (GATJ) in collaboration with its regional networks and other partners will hold the 4th annual Global Days of Action for Tax Justice for Women’s Rights Campaign from 8 to 20 March 2020 under the theme: “Make taxes work for women.” The campaign theme provides a unified direction to guide and galvanize continuous collective action throughout the days of action. The campaign will be an ongoing initiative to have a gender lens in everything that we do to keep the campaign alive for the whole year.

The campaign will be launched on the International Women’s day (8th March) and will coincide with the 64th Session of the UNCSW64 (9-20 March) marking the twenty-fifth anniversary of the Beijing Declaration. The UNCSW meeting will provide a critical opportunity to advance our advocacy messaging on the global commitment by governments to maximise available resources through fair and progressive taxation to fund gender responsive public services and social protection systems. The campaign will provide an opportunity for the tax justice movement and the women´s rights movement to highlight the gendered impacts of taxation; and to ensure that tax justice becomes an integral part of struggle for women’s rights and gender equality; and to build a vibrant movement that promotes gender just tax systems.

Context and Rationale
Every year, hundreds of billions of dollars of public revenues is lost through illicit financial flows and capital flight through tax evasion and tax avoidance by multinational corporations. This deprives governments of the much-needed resources to fund public services, social protection and infrastructure to address inequalities. Marginalized women and those living in poverty are impacted the most. Secondly, regressive and discriminatory tax policies used to raise government revenue continues to have negative impacts on poor people, especially women. In addition, unpaid care work mostly carried out by women remains invisible in the economy. Governments therefore need to act for tax justice by need to recognise, reduce and redistribute unpaid care work; collect tax revenues in a progressive and gender-just manner, as a sustainable way to finance the commitments to end poverty and reduce inequality. Tax revenue justice needs to be a lived reality for women and girls everywhere.

Global Days of Action
It is against this background that the Global Alliance for Tax Justice (GATJ) and partners will hold the Global days of action. GATJ will therefore act as a uniting and campaigning front for the global tax justice movement and women´s rights movement – bringing together civil society groups in coalitions at the national, regional and international levels. This will be done through collectively designed actions and promotion of alternate solutions to help individual efforts achieve greater visibility and impact.

Messages and Demands:
1. Stop illicit financial flows and harmful tax practices that facilitate tax avoidance and tax evasion and are biased towards wealthy countries, multinational corporations, and the wealthy. Including through the establishment of an inclusive intergovernmental UN Global Tax body, where all countries have a seat at the table and equal say in determining international tax rules.
2. Reduce unfair tax burdens on women and adopt progressive and gender just taxation – including new forms of taxation of capital and wealth – combined with less reliance on consumption taxes which harm the poor, a majority of who are women.
3. Remove gender bias and discrimination in tax policies to realise the macroeconomic commitments from the Beijing Declaration which called on nations to “review and modify macroeconomic policies especially tax policies to address the structural causes of poverty and reduce gender inequality” including through practice gender budgeting to ensure that tax revenues are raised and spent in ways that promote gender equality;
4. Ensure tax and fiscal policies recognise and serve to represent, reduce and redistribute unpaid care work
5. Increase allocation of tax revenues for gender responsive social services

Promote the Global Days of Action to Make taxes Work for Women!

Tell your networks, colleagues, and friends! Share our call-to-action poster!