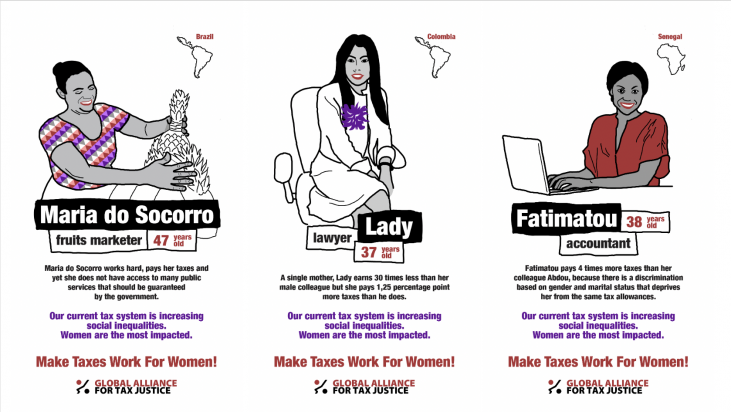 Contribute to our global Wall of Fame: Women & Tax Stories!

Within the campaign “Make taxes Work for Women!”, The Global Alliance for Fiscal Justice (GATJ) is developing a gallery of women facing tax injustice, which will fill into a Wall of Fame, to be published at the end of May.

The Global Alliance for Fiscal Justice (GATJ), in collaboration with its regional networks and other allies, will carry out the 4th campaign demanding #TaxJustice for Women’s Rights, from March 8 to 20, 2020, under the theme “Make taxes Work for Women!”.

This year, the campaign marks the 25th anniversary of the adoption of the Beijing Declaration and Platform for Action, representing an opportunity for review of its implementation, including an assessment of the challenges affecting its implementation, gender equality, empowerment of women and the realization of the 2030 Agenda for Sustainable Development.

Within our objectives of advancing our demand that governments maximize the resources available for finance public services and social protection systems sensitive to gender through fair and progressive taxes, is the objective of raising awareness on these issues. We need the general public to link Gender Equality and Tax Justice.

Therefore, we want to circulate visuals and stories of women facing tax injustice, all over the world. That is why we have already created several profiles in Spanish, English and French, to assemble, at the end of March, a Wall of Fame for a feminist fiscal system.

How can you help? Writing a story of your country!

Use a fact that you know, an investigation you have written, and create a fictional female character of which you will tell the story of fiscal injustice.
Tone: easy, accessible language.
Size: Max. 350 characters.
Send us your contribution, mentioning your contact: your name, your organization, your email so we can communicate.

If you can help, here are our 5 demands to Make Taxes Work for Women:

For more information on how to organize, join and share your activities during the World Days of Action, consult the campaign toolkit in English or contact Marie Antonelle Joubert