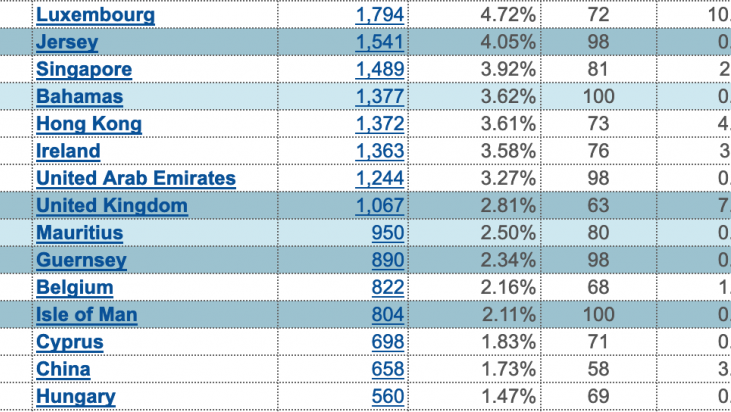 The Tax Justice Network (TJN) launched its Corporate Tax Haven Index on 28 May, which “ranks the world’s most important tax havens for multinational corporations, according to how aggressively and how extensively each jurisdiction contributes to helping the world’s multinational enterprises escape paying tax, and erodes the tax revenues of other countries around the world. It also indicates how much each place contributes to a global ”race to the bottom” on corporate taxes”.

This index will be published every two years. Click here for the full 2019 ranking.

“The Corporate Tax Haven Index, John Christensen of the Tax Justice Network introduces,  provides one of those really rare glimpses of what actually happens underneath the bonnet of the global economy. It tells several disturbing stories…in what we can only describe as a full frontal assault on the national tax sovereignty of every country on the planet. That’s what they’re doing. They’re attacking the tax regimes of other countries. What it reveals is a really disturbing picture of international failure. We see the powerful European countries and especially Britain lying behind their clusters of tax havens and they have wrecked economies across the world and are now threatening social stability and democracy across the world.

But when countries like India say, no, that doesn’t work for us, we’re going our own way, then it gets very serious indeed. And the G20 simply cannot afford to ignore this any longer. So the road is open for the next steps. And of course the next steps are going to take us in the direction the Tax Justice Network has always been talking about. And that is in the direction of proper apportionment of profits to the countries where the profits are aligned with the economic substance. In other words, we’re moving towards unitary taxation and formula apportionment…And I think we should all welcome the opportunity now to create a framework protecting multinational companies that suits the entire world, not just the most powerful countries in the world.”

“The Corporate Tax Haven Index, says Dereje Alemayehu, Executive Coordinator of the Global Alliance for Tax Justice, identifies the UK and a handful of OECD countries (and as some might imagine, not a small island with palm beach in the Caribbean), “as the jurisdictions most responsible for the breakdown of the global corporate tax system – with the UK bearing the lion’s share of responsibility through its controlled network of satellite jurisdictions”. The index exposes the “who to what extent” dimension regarding the facilitators incentivising global tax dodging. The analysis underlying the index gives insight into the institutional enablers and the mechanisms deployed.

In addition, the index exposes the detrimental role played by these corporate tax havens in fostering race to the bottom tax competition between nation states by offering up to “0%” corporate income tax. The index makes clear the pitfalls of signing Double Taxation Agreements with jurisdictions in the index.”

The Global Alliance for Tax Justice’s regional network member in Africa, Tax Justice Network-Africa (TJNA) also welcomed the publication of the Corporate Tax Haven Index: “It shows how the United Arab Emirates (UAE) and Mauritius are among the most corrosive corporate tax havens against African countries, TJNA explains. Kenya and Mauritius signed a Double Taxation Avoidance Agreement (DTAA) in May 2012 which Tax Justice Network Africa (TJNA) successfully challenged in the Kenyan high court. The CTHI reinforces the importance of the Kenya High Court ruling that declared the Kenya-Mauritius treaty null and void by demonstrating the dangers of DTAA signed with tax havens such as Mauritius and UAE in facilitating aggressive tax avoidance resulting to significant revenue loss for many African countries”.