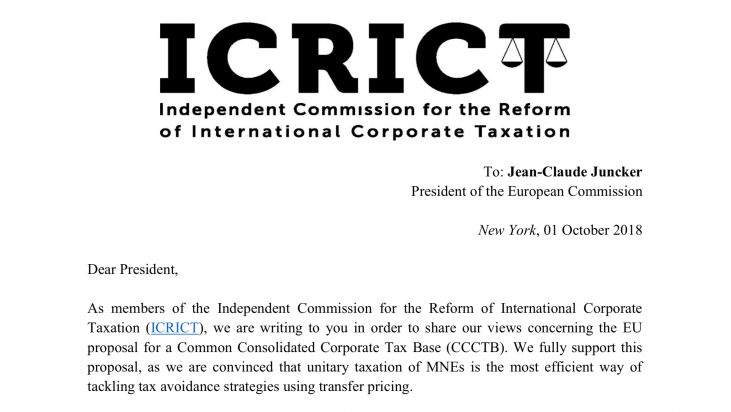 On October 1st, 2018, the Global Alliance for Tax Justice’s committed partner ICRICT, the Independent Commission for the Reform of International Corporate Taxation, published a letter to Jean-Claude Juncker, the EU Commission President. This letter expressed ICRICT’s concern regarding the lack of progress on the EU CCCTB, the Common Consolidated Corporate Tax Base proposal.

The letter is available in English and French.

Regarding EU’s “more recent proposals for a digital taxation”, ICRICT is “convinced that a common consolidated corporate tax base including a digital factor in order to adequately tax and apportion MNEs’ profits is the best way forward. This long-term proposal is more robust and it would put the EU on a strong footing in the fight against tax avoidance”.

However, the commissioners explain, finding an agreement among the 28 Member States on this key reform is proving a challenge, due to the rule of unanimity. But the EU Treaties offer possibilities to circumvent unanimity, for example in the case of a distortion in the conditions of competition in the internal market – as stated in Article 116 of the Treaty on the Functioning of the European Union.

The President of the European Commission, in his State of the European Union on 12 September 2018, argued that it should be possible to make decisions on taxation at EU level with a qualified majority instead of unanimity. ICRICT states: “we ask you to put your words into action as soon as possible. Without any progress on this file before the next EU elections, the European Union risks appearing as powerless in the eyes of citizens, thereby fuelling populist discourse”.

José Antonio Ocampo, Chair of ICRICT, said: “The European Union has been leading the push for reform of the existing system of international taxation, which has been exploited by multinational enterprises to shift large portions of their overall profits to low tax jurisdiction and that has allowed them to avoid bearing their fair share of taxation. Through the EU CCCTB proposal EU member states can move towards a fairer system that realign the rules to treating multinationals according to the economic reality that they operate as unitary enterprises”.

Gabriel Zucman, ICRICT Commissioner, said: “It is time the council moves forward with the EU CCCTB, a system that the European Union has been debated for various decades. We are aware that EU tax havens (e.g. Ireland, Malta) have been opposing this system that would put a stop to their development strategy based on fiscal dumping. But the opinion of the governments of tax havens is not binding. Whilst we hope that a consensus can be reached on this crucial reform, there is nothing stopping Germany, France and the other European countries from moving forward to adopt this reform unilaterally”.

Eva Joly, ICRICT Commissioner, said: “The rule of unanimity for taxation matters at EU level must be overcome. We cannot allow the tax havens inside the Union to block all the reforms towards greater tax justice anymore. If we let countries such as Luxembourg or Ireland have a veto on reforms that would obviously go against their strategies of fiscal dumping, all our efforts are deemed to fail. In his 2018 State of the Union, President Juncker argued in favour of the possibility to make taxation decisions with qualified majority instead of unanimity. I urge him to finally put his words into action! The reform for a unitary taxation (CCCTB) should be proposed under Article 116 of the Treaty so as to circumvent the unanimity obstacle.”