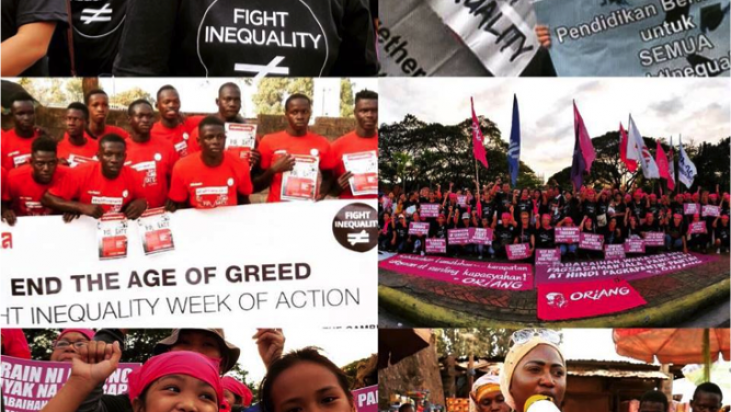 The Fight Inequality Alliance, of which the Global Alliance for Tax Justice is a member, held its Week of Action from 19th to 26th January, under the theme “End the Age of Greed”. From the mountain resort of Davos to an iconic dumpsite mountain “Dandora” in Kenya, activists carried out actions to #fightinequality .

Michelle Mbuthia at Tax Justice Network Africa, Global Alliance for Tax Justice regional network penned an OpEd titled “Davos won’t fix the inequality crisis, people power will”. The blog highlghted the “unrivalled natural-resource wealth and a burgeoning labour force has positioned Africa as the continent to watch. Foreign Direct Investments are at an all-time high and multinational companies are flocking to various parts of the continent in a renewed scramble for Africa. However, the general upswing in the continent’s fortunes does not seem to be having an impact on the lives of those who need it most at the bottom of the pyramid.”

“The kind of changes that would reduce inequality are not big mysteries. We need an overhaul of the global financial architecture, equitable taxation, an end to tax havens, open company registries and stricter enforcement of laws particularly those pertaining to public finance management. The talking- heads at Davos can wax lyrical about all that is needed to fix inequality but at the end of the day it comes down to people power. This week we are showing that together we can.”

The Independent Commission for the Reform of International Corporate Taxation (ICRICT)  panel at the World Economic Fórum debate on tax avoidance said cooperation is needed to reform the international corporation tax system in the aftermath of the Paradise Papers. The summary can be found here: Paradise Papers: Davos panel calls for global corporate tax reform.

The actions were captured in the media with articles including in Reuters, IPS, the Independent, and the Cape Times, and set out in this blog. The story of the “two mountains” and even the official media guides to Davos conference mentioned the Fight Inequality counter-mobilisations. This video was watched over 20,000 times. This shift in narrative – that the answers are with ordinary people – is one we will continue to advance together.

By overcoming the tight security at Davos for this statue protest and this act of literally shining a light of truth whilst also being able to to mobilise at the grassroots across the world, groups showed the power of organising together.