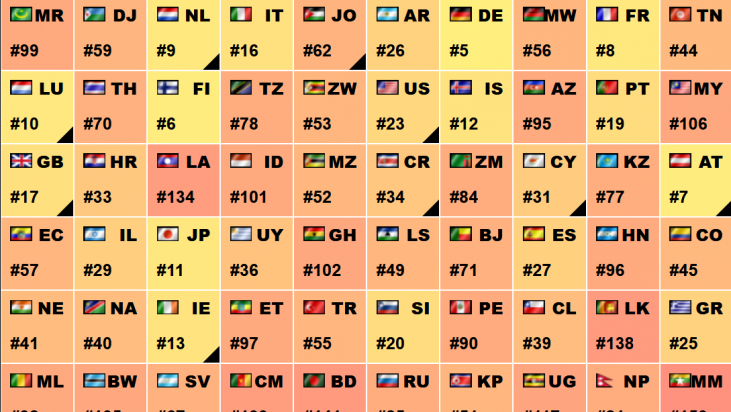 Oxfam and Development Finance International have developed and published “The Commitment to Reducing Inequality Index”, a new ranking of countries based on their policies to fight economic inequality, including tax policy as well as social spending and labor policy.

“In 2015, Oxfam recaps, the leaders of 193 governments promised to reduce inequality as part of the Sustainable Development Goals (SDGs). Without reducing inequality, meeting the SDG to eliminate poverty will be impossible. Now Development Finance International and Oxfam have produced the first index to measure the commitment of governments to reducing the gap between the rich and the poor”.

“This first version of the CRI Index is work in progress, and DFI and Oxfam welcome comments and additions. We find that there is an urgent need for coordinated global investment to significantly improve the data on inequality and policies to reduce it, and much greater concerted action by governments across the world to reduce the gap between rich and poor”.

You can read the report here in English, here in Spanish and here in French. The methodology documents are also available in those three languages.

Global Alliance for Tax Justice’s regional network member in the United States, the FACT Coalition notes for instance that “the US comes 23rd overall out of 152 countries (21st out of 35 OECD countries) and 26th for tax policy only”. “We have also projected, FACT says, the US ranking if Trump’s tax reform outline (April, 2017) and budget proposal (May 2017) became law while the minimum wage remained frozen: The US would lose 6 spots on the overall ranking, moving from the middle to the bottom of the pack among OECD countries. Worse, the tax policy ranking would plummet from 26th to 59th”.