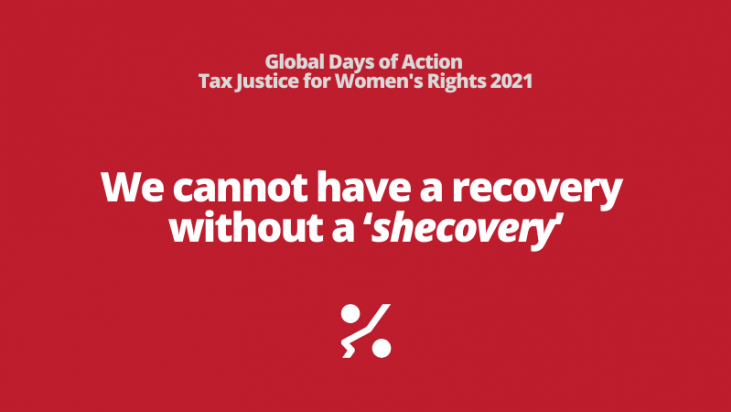 From 15 to 26 March, GATJ, its regional networks and members of its Tax and Gender Working Group will hold mobilisations around the world to raise awareness about the importance of tax and fiscal justice to advance gender equality, as well as to highlight the global movement’s longstanding call on governments and multilateral institutions to fulfill their obligations with our human rights, and on multinational corporations to pay their fair share of taxes. The campaign also aims to strengthen the tax justice and gender justice movements by amplifying the voices of real people.

This year’s edition is all the more significant as it takes place when the world completes at least one year since the COVID-19 outbreak, which has been disproportionately impacting women and is clearly far from an end. “As we start the Global Days of Action and call our governments and multilateral institutions to make taxes work for women, we need to remember that women are the ones holding the burden of the COVID-19-triggered crises. We need a recovery based on gender-equal taxation and economic systems”, highlighted Caroline Othim, Global Policy and Campaigns Coordinator – Africa at GATJ and leader of the campaign, during the opening seminar.

You can watch the full recording of the global seminar in English https://youtu.be/OQRVijFJQE0

Why a Fair Taxation Matters for Women, Especially Amid the Pandemic?

Even before the pandemic, women have been hurt the most with the loss of tax revenue through tax abuse and illicit financial flows, as recalled Erika Beauschene, Communications Coordinator with the Canadians for Tax Fairness. Even though the challenges might differ from region to region, this is a global picture. “As elsewhere, Canadian women have been more likely to lose work, to shoulder the care work burden, and also less likely to return to work”, she pointed out. “There is an expression ‘Shecession’, which economists have been using to describe the unequal impact that the pandemic has had on women. We cannot have a recovery without a ‘shecovery’. So we really need to strengthen support for women and we can afford to do that with tax justice.”

In addition to being at the forefront of the COVID-19 pandemic — according to the World Health Organisation, women represent 70% of health professionals –, women bear the unpaid (or underpaid) care and domestic work burden and, consequently, have to give up on opportunities in the labour market, which historically offers them poor working conditions.

Women are also most affected by budget cuts from public services, as they are the primary beneficiaries. “During the crisis, many governments have adopted austerity measures in an attempt to control the economic crisis, but what we are seeing is a reduction of the access to public services, such as health”, said María Félix Estrada, Deputy Director at INIET and representative of RJFALC.

According to Farah Nguegan, Communications, Campaigns and Outreach Manager at TJNA, due to the absence of hospitals and qualified professionals, 50 million births took place at home worldwide. “In some African countries a pregnant woman can pay up to US$ 1,000. When one has no money and is to give birth, what should this person do? So the low number of hospitals linked to the high cost of health care, it can only worsen maternal mortality. In Niger, one in seven women die from complications related to pregnancy”, she mentioned. “Very little has been spent on gender-responsive public services, which only allows inequality to get deeper. We are asking the governments for more investments on childcare, health and social protection to make sure women are protected”, completed Hoang Phuong Thao, representative of ActionAid International and TAFJA.

Ms. Estrada also highlighted the danger of relying on tax incentives. “In Latin America, we have very complex tax systems, which generally provide tax benefits or exemptions to multinational corporations. Indeed it creates work opportunities, but precarious work, which is overrepresented by women and they do not receive neither a dignified treatment nor an adequate salary for what they do. Adding this to the lack of recognition of unpaid domestic and care work, it only increases inequality”, she explained.

Bringing perspectives from Asia, Ms. Hoang mentioned a research by ActionAid Vietnam showed 60% of women workers did not have any childcare support while they were at work. At the same time, the country has given up about 20% of its national annual budget as tax incentives. “This would be enough to pay for the annual salaries of 37,000 nurses or to build new schools for one entire province”, she said. From Africa, Ms. Nguegan mentioned the case of Zimbabwe, who this year took measures allowing foreign companies to own the country’s mines. “Not only are companies exempt from paying their taxes, they also benefit from more than 50 tax holidays. Imagine the millions Zimbabwe is giving up when the public health system needs investment the most”, she highlighted.

For Ian Gary, Executive Director of FACT Coalition, in the United States the tax code has a clear gender and racial bias. “Over the last few years we have been seeing a decline in the progressivity of taxes in the country, which has starved our government’s resources needed to invest in gender justice”, he said. “Our tax code is from 1939 and it assumes a lot about what family structures, marriages, participation in the workforce looked like. Very few families now meet this model, but we still have a tax code that for example gives a bonus to the highest income earner, who normally are men. There are other ways that our tax system discriminates against women.”

According to Tove Maria Ryding, Policy and Advocacy Manager at Eurodad and Coordinator of TJ-E, the difficulty to make multinationals pay their fair share of tax is one reason why there are still many regressive tax systems. “In Europe we see pretty much the same dynamics as in North America, but we have something else and it speaks to how tax policies in my region have been affecting women all over the world. Europe is where we have the more aggressive countries encouraging the race-to-the-bottom, offering tax incentives and allowing corporations not only to lower their tax rates, but also to shift profit from other countries”, she concluded.

In order to make taxes work for women, the global tax justice movement has calling on multilateral institutions and national governments to:

If you want to take part in the Global Days of Action on Tax Justice for Women’s Rights, sign our letter to the United Nations, participate in the mobilisations organised by our members and partners, and help us take our message further by sharing our demands widely.