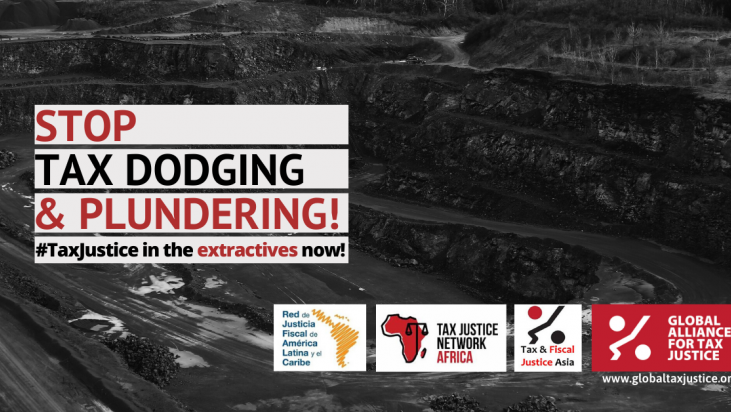 The GATJ Campaign on Tax Justice in the Extractive Industry pushes for the following demands:

Depending on the national and regional contexts as well as organizational priorities and capacities, GATJ members and allies may carry all the demands or may strategically choose the demands that they would like to focus on.

While urging social movements, rights and environmental organisations, citizens’ groups, NGOs, and activists to campaign for #TaxJustice in the Extractive industry, we received a good traction and realized the perspective could be broadened. We thus reframed the Global Day of Action and used it to launch a sustained effort to carry out global campaigns for “tax justice in the extractives sector” in the coming years.

A statement and a press release were issued by TAFJA-APMDD on the GDOA’s eve, the latter titled ‘Asian tax justice alliance calls for closer scrutiny of extractives, immediate scrapping of tax perks urged’

Partners also took part in the campaign launch, such as the Independent Commission for the Reform of International Corporate Taxation (ICRICT): ICRICT commissioners produced quotes which were designed as bilingual visuals and widely circulated online:

The press forum was aimed to share with the members of the media the issues of tax injustices in the extractive sector.
Welcome remarks and introduction were given by Joy Hernandez, GATJ Campaigns and Policy Coordinator in Asia. It was followed by a brief overview of the Global Days of Action by Dereje Alemayehu, GATJ Executive Coordinator. Ah Maftuchan of Perkumpulan Prakarsa (Indonesia) discussed why TAFJA is fully supporting the GDOA and he related the campaign to the tax and extractive issues in Indonesia. Afterwards, Sreedhar Ramamurthi of Environics Trust (India) shared how the marginalised sectors in India are adversely impacted by the operations and tax injustices of the extractive companies.

While not often highlighted, tax injustices in the extractive sector is also common in the Philippines. Lawrence Pulido from the community affected by OceanaGold Philippines, Inc.’s (OGPI’s) mining operations in the province of Nueva Vizcaya shared the issues and struggles to shut down OGPI. Aside from the environmental damage caused by OGPI’s gold mining, it was also found that the fiscal incentives granted to the company reduced its income tax bill, which translated to billions of foregone revenues.

Zeena Manglinong of the Freedom from Debt Coalition explained how big extractive corporations get away with paying taxes while women are being heavily burdened by taxes. She also discussed how the tax reform proposals of the Philippine government, particularly the lowering of corporate income tax rates, will benefit corporations.

Lastly, Mae Buenaventura, co-coordinator of TAFJA, highlighted the need for the tax abuses of the extractive sector to be exposed.

“November 19 is just the start of the efforts to unmask the tax dodging, profit shifting, and illicit financial flows in the extractive industries and to contribute to the existing struggles for economic, environmental, social, and climate justice”, Mae Buenaventura noted.

a direct action with about 50 Philippines civil society activists, in front of OGPI, calling for the cancellation of the company’s FTAA renewal. With activists wearing Salvador Dali masks like the characters in the TV show ‘Money Heist’, the stunt depicts the grand mining heist done by extractive companies and the peoples’ resolve to reclaim the public money for public services.

In Vietnam, ActionAid issued a video titled “Tax Justice in the extractives” , highlighting the global damage called by the extractivism model:

To celebrate the Global Day of Action for #TaxJustice in the Extractive industry, Tax Justice Network Africa (TJNA) and the Technical University of Kenya, School of Business and Management Studies organized a public discussion with students, and a panel of practitioners, who “spoke with passion and narrated how the extractive industry is controlled by a handful of conglomerates who are involved in abusive tax practices:

‘The MNCs together with accounting and legal firms, gang up against the source of resources to avoid paying their fair share of taxes’, Vincent K. Kimosop framed, while the motivating question from Mrs Mercy Ong’onge while addressing undergraduate students was ‘Are we adopting policies that are impoverishing our lives?”. This triggered questions among the participants, who expressed concerns e.g. ‘The communities hardly know the contents of foreign-managed industrial mines’ operational contracts. The effect of their investors’ activities may not be felt immediately but the implications are long-term and, in some cases, irreversible’.
Greenpeace Africa’s Fred Njehu cited Kenya and the community’s participation in stopping the construction of a coal mining plant in Kitui. ‘Speak out, do not watch as an entire community’s lives are being damaged’, he urged the youth.
TJNA published a comprehensive press release after the GDOA, including information on the public discussion.

In Burundi, ICED and ActionAid held a photo petition with many staff members, which were circulated alongside excerpts of a recent report they published on Tax & Extractives in the country.

In Latin America, despite the difficult and urging political, democratic and social context, GATJ and RJFLAC proposed to connect RJFLAC’s actual campaign on tax incentives to the extractives sector. Noteworthy is that regional organizations insisted on focusing on the extractivism aspects of the intensive agriculture and monoculture industries rather than mining, gas, oil.

For more information about the Global Alliance for Tax Justice’s campaign about the Extractive Industry, please feel free to reach out to us: