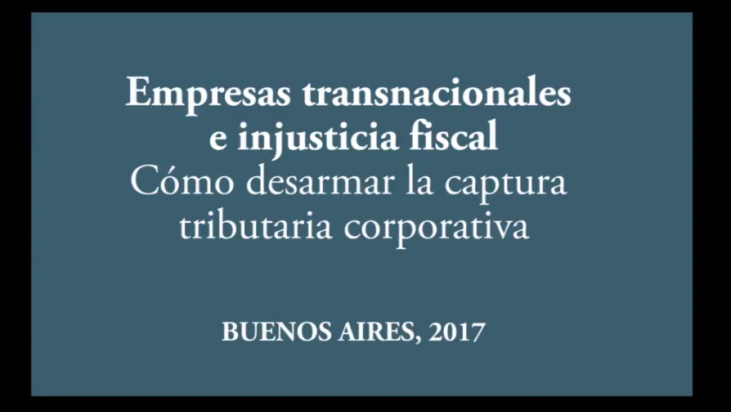 How to disarm corporate tax capture?

New Society (NUSO), a project of the Friedrich Ebert Foundation (FES), is a Latin American journal of social sciences open to currents of progressive thinking, which advocates for the development of political, economic and social democracy in the region.
The journal is published bimonthly since 1972 and in July 2017, NUSO organized an International Conference titled “Transnational corporations and fiscal injustice. How to disarm corporate tax capture” in Buenos Aires. They now publish several videos recorded during the event, in Spanish and English.

“A drain on resources”

Ricardo Martner, an economist, continues investigating tax issues after many years working at ECLAC (economic commission for Latin America) and talks about “Corporate tax evasion and avoidance in the region, and its impact on inequality” (in Spanish).
In Latin America, tax evasion amounts to 6.7% of GDP, making tax defaults one of the major challenges and a huge challenge to achieve the Sustainable Development Goals (SDGs) by 2030.
“It’s a lifelong structural theme in Latin America, says Martner. We have to take action because there can be no development without public resources, without public investment, without provision of public goods.”

Dereje Alemayehu, Senior advisor for the Tax Justice Network Africa (TJNA) and Chair of the Global Alliance for Tax Justice, presents on the IFFs and their perceptions in Africa (in English).

“The perception that was very common even in Africa, says Alemayehu, is that Africa lives on the life support it receives from Northern rich countries. Secondly, people thought that African corrupt rulers were the only ones taking resources out of the continent. The investigation on IFFs gave us the possibility to show that Africa loses more money through IFFs than it gains from FDI or Development aid. So, the campaign Stop the Bleeding Africa, even if it has not stopped IFFs, has changed the perception on Africa”

“The black hole of financing for development “

Luis Moreno, head of Fiscal Justice issues within the Latindadd network, presents the perspectives of a regional approach to IFFs (in Spanish): “corporate power is eroding the tax base of the region’s countries through tax evasion and avoidance mechanisms. Misinvoicing represents 80% of the IFFs and in the region, it is already measured that out of every dollar that comes in as official development aid, 10 $ are going out through IFFs. Another portion of much larger mechanisms – but very difficult to quantify – is avoidance: the most important system used by transnational corporations is the manipulation of transfer pricing”.

“It is a political decision that is required in our countries, says Moreno, in order to recover this enormous amount of money. It is not a matter of technical debates, but of political ones!”

“The different ways in which IFFs impact gender equality”

Verónica Grondona, an economist from the Universidad de Buenos Aires and a political advisor for the European Parliament Group GUE-GNL on the Panama Papers, details her work on “IFFS undermining gender justice” (in Spanish), which she developed with Nicole Bidegain Ponte y Corina Rodríguez Enriquez, both researchers at DAWN (Development Alternatives with Women for a New Era) in 2016 (See our article about this investigation).

Sol Picciotto, Senior Advisor for Tax Justice Network, presents the Base Erosion and Profit Shifting (BEPS) project, implemented by the OECD (in English) and the context that “forced world leaders” to consider amending international tax rules. In 2013, Picciotto explains, the G20 gave a mandate to OECD, which was “to reform international tax rules to ensure that Multinational Corporations could be taxed where economic activity occur and where value is created”, as per the demands of tax justice movement for more than 15 years. Whereas the actual international tax rules are inadequate for international companies, which should be treated as single entities, the OECD’s BEPS is a “very partial” effort, such as the country-by-country reporting: partial, unequal and confidential.