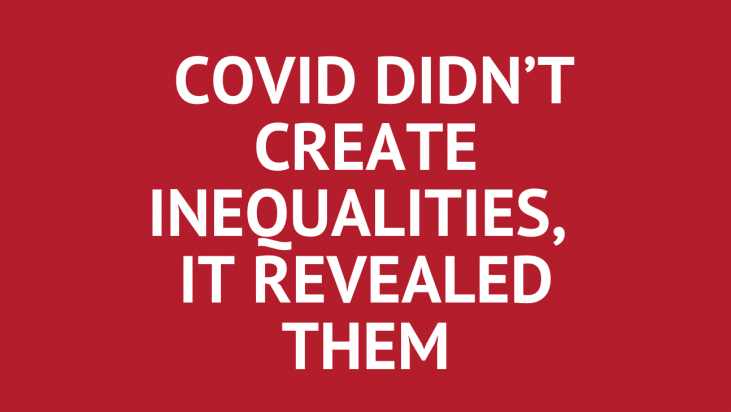 In depth: Why fair taxation matters in wake of this pandemic

The COVID-19 pandemic exacerbates the wealth redistribution crisis and those hit harder are women and vulnerable groups at the intersections of inequalities. Economic experts from civil society highlight the many alarm bells ringing, that all point to the need for taxation reform to ensure fair distribution of resources. We simply won’t tackle this crisis conjuncture without tax justice.

By Caroline Othim, Global Alliance for Tax Justice and Roosje Saalbrink, Womankind Worldwide as Co-coordinators of the GATJ Tax and Gender Working Group.

How did we get where we are?

The COVID-19 crisis reveals failures of neoliberalism and patriarchy: Evidence shows that the COVID-19 pandemic is deepening pre-existing inequalities and exposing vulnerabilities in our current social, political and economic systems brought about by neoliberalism informed by capitalism, patriarchal and racist systems of discrimination and a history of colonialism. People in all countries at all levels of development are affected but countries in the Global South and particularly women and vulnerable groups are hard hit as governments and health authorities strive to limit widespread infections of COVID-19 and mitigate economic fallout. While neoliberalism and patriarchal norms continue to undermine, subvert and ignore women’s rights.

Industrialised levels of tax evasion and avoidance has left many countries lacking the resources to fund public services. In consequence, healthcare systems in countries in the Global South are also woefully understaffed and underfunded with public healthcare workers missing personal protective equipment like masks, gloves and isolation centres lacking ventilators for critical patients. Millions of people in the Global South also do not have access to adequate healthcare and live in crowded informal settlements where social distancing is impossible, many more also do not have access to clean water to practice hand washing techniques which is now a privilege for some in the society.

“As with the climate crisis, the heaviest COVID-19 burden is loaded on those most vulnerable. The poorest are affected first and worst.”

What is the crisis showing us?

Intersecting inequalities in the face of the pandemic

Inequality exacerbates the vulnerabilities and gendered impacts of COVID-19 particularly for those women at the intersections of inequalities based on different identities like gender, race, age, sexual orientation, (dis)ability, class. As with the climate crisis, the heaviest burdens is loaded on those most vulnerable. The poorest are affected first and worst.

Women have always taken on an overwhelmingly larger share of unpaid care work than men, combined globally spending 12.5 billion hours every day performing unpaid care and domestic work, valued at least US $10.8 trillion annually. The pandemic has worsened the situation as women have taken on additional care roles at the family and community levels and domestic workers and cleaners. As frontline workers, globally women make up 70 per cent of healthcare workers, and women represent 90 per cent of all nurses. Despite suddenly being seen as ‘essential’ even ‘heroic’ workers, many of these workers still struggle for decent work conditions, pay and representation in decision-making levels, highlighted by the lack of access to personal protective equipment.

Women are over exposed to unsafe, unprotected, precarious and informal work
Two billion workers around the globe are informal sector workers, making up more than 60% of the global workforce. They are daily wage earners, casual labourers and in other precarious jobs, having no savings to stockpile or cushion the loss of income, nor have access to social protection and many have already lost their income and struggle to access food. Some countries in the Global South also have a large informal economy of up to 90% and do not have social welfare systems to cover those without jobs as a result of lockdown measures due to the pandemic.

The pandemic has brought great economic hardship especially for the Global South
Years of trade liberalisation has reshaped economies and relegated developing countries to largely producing and exporting primary commodities and importing manufactured goods and now impacted by the drop in the price of commodities in the context of a global recession. Economic impacts of COVID-19 have seen a collapse of commodity prices that has also led to low prices of natural resources from which countries in the Global South depend on to raise domestic revenues. Less exports from countries in the Global South due to less demand and less economic activity has the probability of leading to a huge economic recession requiring government to inject money into businesses and individuals for survival. Lack of fiscal space, weak domestic resource mobilisation and tax evasion, limited Central Banks capacity and weak currencies make it difficult for countries in the Global South to inject the required money into the economy, social services and social security.

In addition, many of these countries have unsustainable public and private debt levels leading to high repayments, austerity measures as a result of IMF and WB loan conditionalities of the past decades led to reduced public expenditure and investment in public services such as health, education, social care, gender-based violence prevention and response. Currently, many countries do not meet their minimum international commitments in terms of budget allocation to social sectors. In 2016 for instance, Nigeria spent only 4.3% of its total budget on health, whereas the Abuja Declaration principles require an allocation of at 15% of budgets to health. In international negotiations, the OECD led Inclusive Framework process as well as the post Cotonou negotiations timelines of trade agreements place countries in the Global South in a precarious position.

Tax dodging is getting worse and is indefensible
Countries in the Global South are also witnessing an unprecedented fall in Foreign Direct Investments (FDI). In response new tax incentives may be adopted argued to counterbalance the fall in FDI in post corona period, further depleting tax income. This is especially a risk for countries with natural resources in the global South as they compete to ‘attract’ FDI by lowering Corporate Income Tax (CIT) rates and providing tax giveaways with weak regulations protecting labour rights and the environment. This race to the bottom significantly erodes tax bases of these poor developing countries leading to a significant tax revenue loss and is already happening: As part of their COVID-19 response plans, Kenya and Indonesia have lowered CIT by 5%, and this may have a ripple effect in the regions. This is on top of the consistent private sector lobbying for lower tax rates and a race to the bottom over the past decades. Only a handful of countries globally are making targeted interventions that do not widen inequality, respecting their commitments to non-retrogression of human rights, and proposals such as surcharges on wealthy elite and a solidarity tax.

“Governments world over need to act now to prevent the spread of Covid19 among the poorest and most vulnerable countries and the economic impacts, which are least equipped to deal with its consequences. The measures need to integrate a gender lens, respect human rights and increase maximum available resources, so as not to widen gender inequality and the socioeconomic gap taking us back decades on women’s rights and development.”

We demand greater and sustainable investment in public services.
In response to the spread of the coronavirus, there is need for greater investment in universal social protection systems and publicly funded, quality, universal public services in particular health and sexual and reproductive health services, which are massively curtailed in light of this pandemic. As a long term measure governments also need to ensure that women’s rights organisations and movements in their full diversity are fully engaged in meaningful consultations and participation in all the response and recovery measures and plans.

Tax the rich.
To tackle the economic impacts, governments need to use all the available resources, including taxing big business and wealthy individuals: they need to pay their fair share to avoid the highest costs being borne by those least able to pay them. In short, it is high time to tax the rich, and tax multinationals where they create wealth.

Lower the burden on the poor.
Some tax measures as emergency response to encourage liquidity especially for women and vulnerable groups include for governments to delay tax filing, institute tax exemptions.

Tax the pandemic profiteers.
In the medium term, consider solidarity or corona taxes for companies that are making huge profits during this time e.g. digital companies. Extreme inequality is out of control. The world’s richest 1% have more than twice as much wealth as 6.9 billion people. There is enough wealth in the world to ensure basic human rights for all, including access to public services including healthcare, water, education, social care, and social protection.

Specific tax measures are needed to protect consumption for lower incomes, such as reductions in VAT. For example, in Burkina Faso, and Kenya. In the post crisis period, countries in the Global South will need to increase their tax to GDP ratio, a measure of a nation’s tax revenue relative to the size of its economy, which are currently very low and have not increased over the last few years. The focus should be on property tax, and to use this revenue to invest in a social protection and security systems especially for women and other vulnerable groups.

This is the time for transformative change towards women’s rights addressing structural faults that continue to pile up resources in the hands of a few. It is time for systemic reforms for redistributive justice including progressive taxation reforms, where the wealthy elite and multinational companies pay their fair share. It’s about creating alternatives to the current structure’s economic model that is fit for purpose and reinvigorating the role of the State. A just feminist economy would reduce the time burden of unpaid care work, provide secure incomes, tax justice with sufficient public resources to guarantee maximum levels of health and care provision, and promote women’s safety and ability to engage in political activity.

While the COVID-19 pandemic pushes the redistribution crisis into overdrive, we need adequate resources and we’ll get this through tax justice!