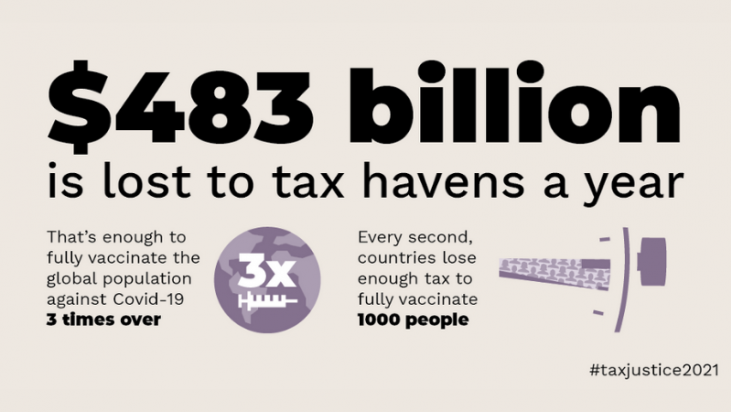 Download the State of Tax Justice 2021 in English, Spanish, French and Portuguese

Countries are losing a total of $483 billion in tax a year to global tax abuse committed by multinational corporations and wealthy individuals – enough to fully vaccinate the global population against Covid-19 more than three times over¹. The 2021 edition of the State of Tax Justice documents how a small club of rich countries with de facto control over global tax rules is responsible for the majority of tax losses suffered by the rest of the world, with lower income countries hit the hardest by global tax abuse. The findings are further galvanising calls to move rule-making on international tax from the OECD to the UN.

The State of Tax Justice 2021 – published by the Tax Justice Network, the Global Alliance for Tax Justice and the global union federation Public Services International – reports that of the $483 billion in tax that countries lose a year, $312 billion is lost to cross-border corporate tax abuse by multinational corporations and $171 billion is lost to offshore tax evasion by wealthy individuals.

The $483 billion loss consists of only direct tax losses: that is, tax losses that can be observed from analysing data self-reported by multinational corporations and from banking data collected by governments². Uncounted in this estimate are the indirect losses: the chain-reaction losses that arise from tax abuses accelerating the race to the bottom and driving tax rates down globally. The IMF estimates that indirect losses from global tax abuse by multinational corporations are at least three times larger than direct losses³. No equivalent estimate exists for the indirect losses of offshore tax evasion.

Tax Justice Network data scientist Miroslav Palanský said, “The $483 billion lost to tax havens a year is the tip of the iceberg. It’s what we can see above the surface thanks to some recent progress on tax transparency, but we know there’s a lot more tax abuse below the surface costing magnitudes more in tax losses.”

The lion’s share of blame among higher income countries falls on members of the OECD (Organisation for Economic Cooperation and Development), a small club of rich countries and the world’s leading rule-maker on international tax. Despite commitments by OECD members on curbing global tax abuse, OECD members were found to be responsible for facilitating 78 per cent of the tax losses countries suffer a year. OECD members facilitate the handing over of $378 billion a year from public purses around the world to the wealthiest multinational corporations and individuals.

The worst culprit among OECD members is the UK, which is responsible for over a third (39 per cent) of the world’s tax loss. The UK is by far the world’s greatest enabler of global tax abuse, which it facilitates through a network made up of British Overseas Territories like the Cayman Islands, Crown Dependencies like Jersey and the City of London. Known as the UK spider’s web4, the UK government has full powers to impose or veto law-making in these territories and dependencies and key government positions in these jurisdictions are appointed by the Queen.

The UK spider’s web, together with OECD members Netherlands, Luxembourg and Switzerland are responsible for over half of the tax losses the world suffers (55 per cent), which is why the countries are often collectively referred to as the “axis of tax avoidance”. The axis of tax avoidance cost the world over $268 billion in tax losses a year, equivalent to more than 18 times the amount of money expected to have been spent globally on facemasks in 2020 and 20215.

The huge role the axis of tax avoidance plays in facilitating global tax abuse means that many OECD members are also among the heaviest losers, in absolute terms. France, for example, cost other countries over $4.6 billion in tax losses a year, but lost over $41 billion a year itself. Even in countries responsible for the most extreme levels of abuse, few citizens enjoy any benefits as almost all the tax losses their governments enable are pocketed by wealthy multinational corporations and individuals. Citizens of these countries typically face higher inequalities, a greater threat of corruption of their political systems and the documented consequences of the “finance curse” phenomenon6. Reigning in OECD members’ tax havenry would generate major benefits to people living in both OECD and non-OECD member countries.

Despite the huge tax loss suffering imposed by these countries, no OECD member nor any axis of tax avoidance country appears on the EU tax haven blacklist7. The handful of mostly small island nations blacklisted by the EU are responsible for 1.1 per cent of global tax abuse.

Global tax abuse enabled by rich countries is hitting poorer countries the hardest. While higher income countries lose more tax in absolute terms, $443 billion a year, their tax losses represent a smaller share of their revenues – 9.7 per cent of their collective public health budgets. Lower income countries in comparison lose less tax in absolute terms, $39.7 billion a year, but their losses account for a much higher share of their current tax revenues and spending.

Collectively, lower income countries lose the equivalent of nearly half (48 per cent) of their public health budgets – and unlike OECD members, they have little or no say on the international rules that continue to allow these abuses.

The $483 billion lost to tax havens a year is enough to cover the cost of purchasing and delivering two Covid-19 vaccine doses for the global population three times over8. This is equivalent to vaccinating 1000 people against Covid-19 every second. The taxes that lower income countries lose to tax havens in a year would be enough to vaccinate 60 per cent of their populations, bridging the gap in vaccination rates between lower income and higher income countries. With their vaccination rates far lower, global tax abuse deals a double blow to lower income countries by robbing them of the funding to protect their populations against Covid-19 and, consequentially, exposing them to an even greater human and economic toll.

Analysis for the State of Tax Justice 2021 reveals that for every $1 OECD countries pledged to the COVAX programme, a worldwide initiative established to address vaccine inequity, they cost the rest of the world $43 in lost tax by facilitating global tax abuse. Altogether, OECD countries pledged $8.7 billion to the COVAX programme but cost the world $378 billion in lost tax9. If OECD countries had not pledged any money to COVAX but simply stopped facilitating global tax abuse instead, countries around the world could have collected enough tax revenue to vaccinate the global population against the Covid-19 virus 2.9 times over.

“The richest countries, much like their colonial forebearers, have appointed themselves as the only ones capable of governing on international tax, draped themselves in the robes of saviours and set loose the wealthy and powerful to bleed the poorest countries dry. To tackle global inequality, we must tackle the inequality in power over global tax rules. Rules on where and how multinational corporations and the superrich pay tax must be set at the UN in the daylight of democracy, not by a small club of rich countries behind closed doors.”

Urgency grows for UN to step in

Calls for shifting the responsibility of setting tax rules away from the OECD to the UN gained unprecedented traction this year when the High Level Panel on International Financial Accountability, Transparency and Integrity for Achieving the 2030 Agenda (FACTI) called for a comprehensive overhaul of the global architecture. The FACTI Panel’s key recommendations draw closely on the work of the tax justice movement, and include the establishment of a UN tax convention, a Centre for Monitoring Taxing Rights at the UN to raise national accountability for illicit financial flows and tax abuse suffered by others, and a globally inclusive, intergovernmental UN forum for the urgent negotiation of further changes to the international tax rules10.

The proposal follows years of criticism11 levied against the OECD for its failure to deliver meaningful change in its long-awaited tax reform proposals, and the hypocrisy of its members inflicting huge tax losses on others. The OECD’s latest global tax deal, which includes a global minimum tax rate, similarly came under fire this year for acquiescing to tax haven members like Ireland. The tax deal is expected to recover only a sliver of tax revenues lost to tax havens and will redistribute most recovered taxes to rich OECD members instead of the countries where the taxes should have originally been paid.

“Another year of the pandemic, and another half trillion dollars snatched by the wealthiest multinational corporations and individuals from public purses around the world. Tax can be our most powerful tool for tackling inequality, but instead it’s been made entirely optional for the superrich. We must reprogramme the global tax system to protect people’s wellbeing and livelihoods over the desires of the wealthiest, or the cruel inequalities exposed by the pandemic will be locked in for good. The State of Tax Justice tells us exactly which countries are responsible for the tax abuse we all suffer. It’s time they were held accountable.”

Taxes on wealth and excess profit

In addition to calling for a UN role on global tax, the State of Tax Justice also recommends the introduction of an excess profit tax and wealth tax. The report calls on governments to:

“Many corporate and political leaders applaud our frontline workers in public; yet in private, they undermine frontline services by continuing to perpetuate tax abuse on a repulsive scale. Ending tax dodging would pay for 1000 people to be fully vaccinated every single second; we could fully vaccinate the world’s 135 million health and care workers in just a day and a half. The only way out of this crisis is to end vaccine inequality, and that requires both waiving patents and cracking down on corporate tax dodging, which pulls money away from our frontline health services and into their offshore bank accounts.“

Estimates on offshore tax evasion by individuals are based on banking data collected by governments.

About the Tax Justice Network

The Tax Justice Network believes our tax and financial systems are our most powerful tools for creating a just society that gives equal weight to the needs of everyone. But under pressure from corporate giants and the super-rich, our governments have programmed these systems to prioritise the wealthiest over everybody else, wiring financial secrecy and tax havens into the core of our global economy. This fuels inequality, fosters corruption and undermines democracy. We work to repair these injustices by inspiring and equipping people and governments to reprogramme their tax and financial systems.

Public Services International is a Global Union Federation of more than 700 trade unions representing 30 million workers in 154 countries. We bring their voices to the UN, ILO, WHO and other regional and global organisations. We defend trade union and workers’ rights and fight for universal access to quality public services.