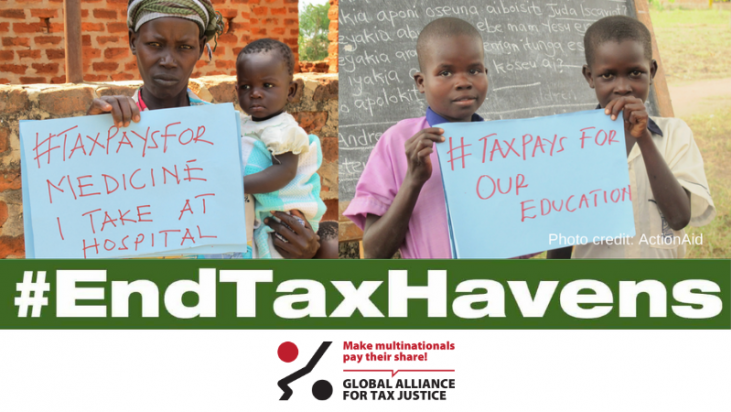 In April 2016, the Panama Papers — a global news exposé coordinated by the International Consortium of Investigative Journalists (ICIJ) — revealed a global network of shell companies and hidden bank accounts, which were being used to facilitate tax abuse, bribery, arms deals, financial fraud and drug trafficking. Five years later, civil society organisations and investigative journalists continue their fight to end tax havens, as there is still a long way to go.

It is no coincidence that combating dark money flows was recognised as key for global peace: Revenue lost to tax havens is fuelling poverty and exacerbating inequality across the world. “Secrecy in the global financial system poses a constant threat to peace and stability. It is also a powerful tool for kleptocratic elites and criminal organisations to perpetuate structural inequality, leading to conflict around the world,” states the letter that nominated the Global Alliance for Tax Justice and ICIJ for the Nobel Peace Prize.

Systemic tax abuse has led people to lose out as wealth flows outwards from the public and into the private hands of the few, hidden away in tax havens. This distorts economies, undermines democracy and deprives people of funding for the vital public services we need to live and the human rights we are all entitled to.

According to the State of Tax Justice 2020, countries are losing at least US$ 427 billion in tax each year to international corporate tax abuse and private tax evasion, the equivalent of nearly 34 million nurses annual salaries every year. It is even more outrageous as the rich countries setting the global tax rules are responsible for over two-thirds of global corporate tax abuse, as it shows the Tax Justice Network’s Corporate Tax Haven Index 2021.

The growing number of tax haven exposés – including the Panama Papers, LuxLeaks, Swiss Leaks and Bahamas Leaks – has brought to the fore the human costs of global tax abuse that are facilitated by tax havens. Every dollar lost to tax havens could have been invested in public services which are vital to realise human rights.

Tax is fundamental for the realisation of human rights, not only because it is necessary for ensuring sufficient resources, but also because tax policies play a fundamental role in redressing inequalities and in shaping how accountable governments are to their people.

The impact on developing countries

Shifting profits to tax havens can be especially damaging to developing countries which need tax revenue to pay for public services and tackle poverty. The data released by the SwissLeaks exposé revealed that US$ 48.3 million linked to Zambia was sitting in Swiss bank accounts. At the same time, the Zambian government struggles to fund public services to meet their citizen’s rights, with 47% of children not completing primary education and 60% of the population living below the poverty line.

Women and girls have been hurt the most with the loss of tax revenue through tax abuse and illicit financial flows — and this situation has worsened amid the COVID-19-triggered crises. Besides taking on an overwhelmingly larger share of unpaid care work than men — globally spending 12.5 billion hours every day, which is valued at least US $10.8 trillion annually –, women are at the forefront of the pandemic, globally making up 70% of healthcare workers. Despite suddenly being seen as ‘essential’ workers, many of them still struggle for decent work conditions, pay and representation in decision-making levels, highlighted by the lack of access to personal protective equipment.

Women are also over exposed to unsafe, unprotected, precarious and informal work. Two billion workers around the globe are informal sector workers, making up more than 60% of the global workforce. They are daily wage earners, casual labourers and in other precarious jobs, having no savings to stockpile or cushion the loss of income, nor have access to social protection and many have already lost their income and struggle to access food. Some countries in the Global South also have a large informal economy of up to 90% and do not have social welfare systems to cover those without jobs as a result of lockdown measures due to the pandemic.

How can we change this?

The global tax justice movement have been building public and political momentum globally to end tax havens, by calling on our governments to: