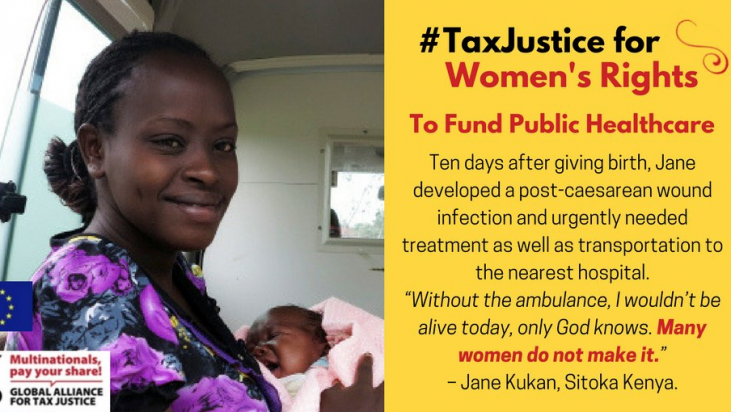 *This special blog post for the #TaxJustice for Women’s Rights Global Days of Action has been contributed by Bosire Nyamori*[1], a Kenyan Lecturer and Advocate in tax law.

The world this month celebrated the International Women’s Day, which highlights the achievements women have made on the social, economic, cultural and political fronts. In Kenya, gender equality and women’s empowerment is a salient feature of the policy and legal landscape. This is recognised as an imperative for reducing poverty and promoting growth and development.  The Constitution of Kenya 2010 recognizes women as a special group deserving of constitutional protection. For instance, Article 27(6) requires the state to pass laws and formulate policies that include affirmative action programs to address the past discrimination that women have faced. Sessional Paper Number 10 of 2012 on Kenya Vision 2030 is Kenya’s blueprint for implementing social, economic and political development agenda for the period 2008 to 2030, with a view to attaining middle income status. Under the social pillar, transforming gender relations and norms is acknowledged as the route to creating ‘a just, cohesive and equitable” society.

Formulating policies and passing laws to promote gender equality and engender women empowerment is geared at addressing discrimination and disadvantages women have faced on many fronts in this country. These have hindered their effective participation and contribution to all facets of the country’s development.

In  the recent past, research has shown that both revenue and expenditure policies affect women and men differently. Kenya has sought to address some gender concerns through budgets. In early 2013, Kenya implemented the policy of free maternity services to reduce maternal mortality and morbidity. Earlier in 2007, it launched the Women Enterprise Fund to extend accessible and affordable credit to support women to engage in businesses. In comparison, Uganda has gendered its budget after realizing that it cannot tackle the unique economic and social challenges women face without identifying and analyzing the policies that are at the root.

There is progress on addressing gender equality and women’s empowerment from the expenditure side. An issue that is now attracting the interests of analysts is how to use the tax system to tackle gender concerns. Put differently, how can Kenya design its tax laws, practice and administration so as to address the gendered nature of economic behaviours and social arrangements such as women raising children on their own, earning lower wages, shouldering more family responsibilities and more women in the informal sector?

To assist on thinking through responses for this question, I give three examples. First, women, compared to men, tend to spend a higher proportion of their income to buy basic goods and services such as food and healthcare. Many food items are subject to Value Added Tax and as this tax is regressive – women pay a large percentage of taxes in proportion to the income they earn. Second, most single parent homes are headed by women and this comes with high financial responsibilities. Do such women receive tax credits to assist in defraying some of the child care costs that they have to shoulder? Before the Kenyan government abolished it in the fiscal year 1970/71, the Supplementary Single Allowance provided an allowance for a single parent, clearly to relieve the financial burden of raising a child. Also before 1996/97 fiscal, Kenya had tax relief for those on formal employment calibrated on one’s marital or family status. Third, there is evidence that some women, compared to men, earn lower salaries although occupying same positions. To what extent could the government use the tax system to close the wage gap in employment?

While the issue of gendering the tax system raises complex questions of law that are not open to easy resolution, it a subject that can longer be ignored if we advocate for gender equality and women’s empowerment as a central plank of policy, law and practice in the country. Going forward, analysts and policymakers must explore and support a review of tax law with a view to identifying and recommending changes to address the unique dynamics women face.