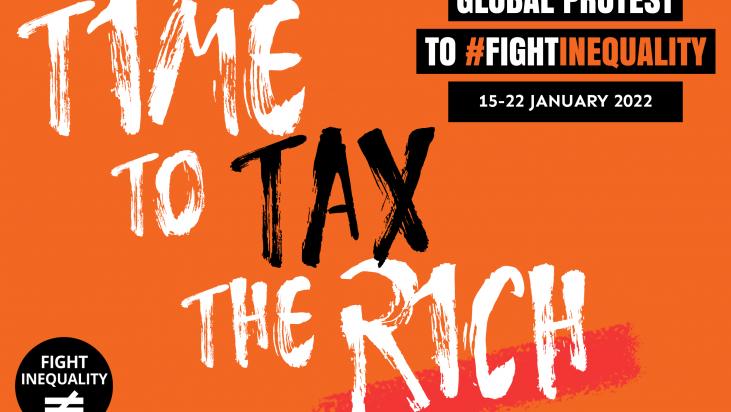 Taxing the World’s Richest Would Raise US$ 2.52 Trillion a Year

A new analysis published this Wednesday (19 January) by the Fight Inequality Alliance, Institute for Policy Studies, Oxfam, and Patriotic Millionaires found a shocking rise in global wealth among the world’s richest people despite deepening inequality during the COVID-19 pandemic. Globally:

An annual tax on the world’s richest would be enough to lift 2.3 billion people out of poverty, make enough vaccines for the whole world, and deliver universal health care and social protection for all the citizens of low and lower middle-income countries (3.6 billion people).

This new global billionaire wealth analysis comes on the heels of a new Oxfam report based on World Bank data that shows that while 99 percent of the world’s workers earned less money in 2021, the world’s ten wealthiest men more than doubled their fortunes. Meanwhile, global protests around the world organised by the Fight Inequality Alliance are happening in over 25 countries to coincide with the World Economic Forum’s ‘State of the World’ online meetings.

This latest rise in global wealth stands in stark contrast to loss of lives and jobs during the pandemic, which has pushed tens of millions more people into poverty and further increased inequalities, particularly in poorer nations around the world.

Read the full breakdown for billionaire wealth in specific countries and regions via individual fact sheets.

“The insane reality is that whilst billions face a daily struggle to survive during this pandemic, billionaire wealth is spiraling out of control. This cannot be right, said Jenny Ricks, Global Convenor of the Fight Inequality Alliance. “For years Davos has shown us the elites cannot and will not end the virus of inequality they have helped to create. We now have the rare opportunity to create the economy and society we want but this requires deep system change rather than a rehash of the status quo. That’s why it’s time for wealth taxes on the super rich that could raise an eye watering $2.52 trillion a year globally and pay for a People’s Recovery Plan.”

“Wealth inequality has been supercharged by the pandemic, creating an unprecedented global concentration of wealth and power,” said Chuck Collins of the Institute for Policy Studies and co-author of the report. “Taxing the world’s wealthiest one-tenth of 1 percent would raise substantial revenue for public investments in health and social protection and for a greater global response to the most urgent crises of our time. During 2021 we witnessed the epidemic of COVID-19 and wealth-hiding, and it’s time to reverse course.”

“There is no defending a system that endlessly inflates the wealth of the world’s richest people while condemning billions to easily preventable poverty. We need deep, systemic change, and that starts with taxing rich people like me,” said Morris Pearl of the Patriotic Millionaires.