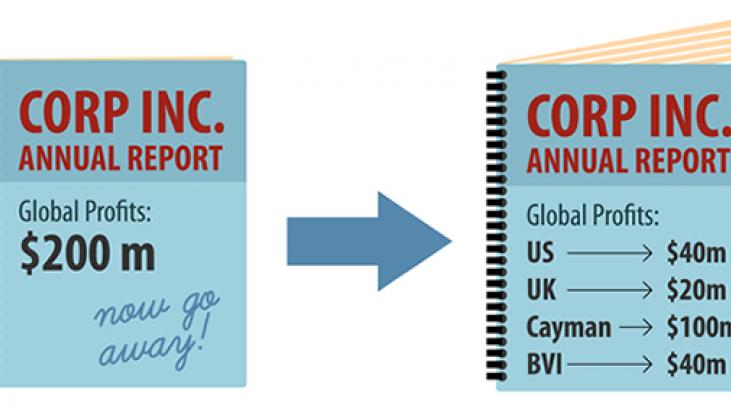 To Maximize Corporate Transparency: IRS Must Strengthen its Rules

In the wake of new research revealing that offshore corporate tax avoidance has cost governments worldwidehundreds of billions of dollars in lost revenue, leaders of the world’s 20 largest economies have started to crack downon this behavior. As part of its action plan to counter tax avoidance, the OECDhas advocated mandatory country-by-country reporting (CBCR) as a crucial tool needed to end the practice of base erosion and profit-shifting by multinational corporations. Following the OECD’s lead, the Internal Revenue Service put out rules to enact private CBCR, which would require U.S. parent companies that reported an annual revenue of at least $850 million to share information on profits, tax rates, and subsidies received in every country in which they do business.

While this new rule is a major step toward bringing an end to corporate tax dodging, it falls short by making these disclosures private instead of available to the public. As Heather Lowe, Director of Government Affairs at Global Financial Integrity, explained in her testimony before the IRS, making this information publicly available would give both Congress and advocacy groups the information they need to analyze solutions to the problem of base erosion and profit-shifting, instead of relying on the already over-burdened IRS.

Shielded by a prior lack of federal transparency requirements, multinational corporations have been able to exploit loopholes in both U.S. and international tax laws to shift their profits to subsidiaries in low or no-tax nations; a recent CTJ report found that American Fortune 500 companies are avoiding up to $695 billion in federal income taxes this way. Expanding CBCR through a public disclosure requirement would put information about corporate behavior in the hands of citizens around the world who can hold both these corporations and their governments accountable.

A comment issued by the FACT Coalition highlights other ways in which the IRS rules on CBCR could be strengthened. For instance, the OECD has estimated that the $850 million annual revenue threshold would exempt between 85 and 90 percent of all multinational entities from reporting requirements; lowering this threshold to $45 million would provide a broader picture of multinational corporation behavior. Additionally, since corporations often label independent contractors as employees to give an illusion of legitimacy in tax haven countries, changing the definition of “employee” for CBCR as one for whom the corporation pays payroll or other taxes would bring about even more transparency.

As the world grows increasingly concerned about the expensive problem of corporate tax avoidance, the U.S. should lead the fight for international transparency by adopting expansive CBCR that holds all multinational corporations accountable.