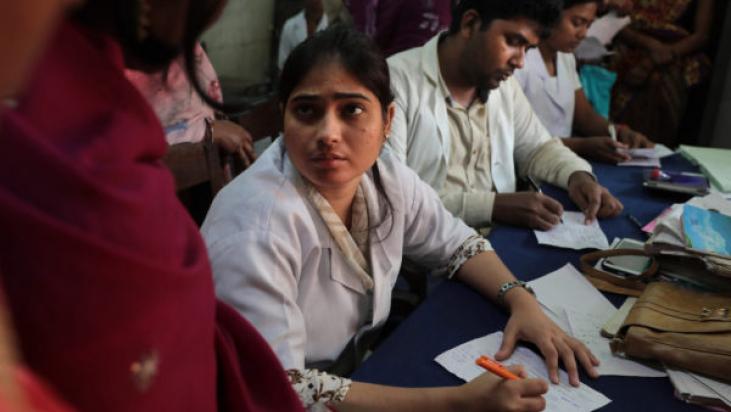 International Public Service Day, commemorated every year on June 23rd, was designated by the United Nations in 2003 to “celebrate the value and virtue of public service to the community”. This year’s commemoration takes place amidst an unprecedented health and socio-economic crisis, caused by the COVID-19 pandemic. The unravelling crisis has made two things clearer than ever:  the “value and virtue” of public services have been under threat for a long time and their neglect has catastrophic consequences for humanity, especially the vulnerable and impoverished. Tax and fiscal justice are a vital part of ensuring adequate essential public services for all.

In a recent interview, Pope Francis reiterated the commentary of a journalist by stating: “It has become evident that those who do not pay their taxes are not only committing a crime, but murder: if there are not enough hospital beds or respirators, they too are partly to blame.”

No nation was prepared to adequately respond to the emerging crisis. But this was no fatality; the unpreparedness was an outcome of policy choices made by governments. Instead of curtailing tax dodging by multinationals and wealthy individuals to enhance public revenues to expand and adequately resource public services, they opted to introduce austerity measures, drastically cutting public spending. These measures made the rich richer and the poor poorer. These choices wrecked the provision of essential services.

Austerity facilitated the propagation of the pandemic worldwide

The clearest lesson from the devastation caused by the pandemic so far is that the austerity policies and programmes cultivated a fertile ground for the rapid outbreak of COVID-19 worldwide. As the pandemic spread and reached all corners of the world, it became clear early on that an unprecedented tragedy was unfolding: cruelly underfunded and understaffed, public health systems are overwhelmed. They are not in a position to cope with a crisis of this magnitude. The lockdowns and other measures introduced in all countries in the ensuing public health emergency aggravated the social and economic crisis, affecting the poor and vulnerable in more drastic ways.

The lack of tax justice is a key link in the chain of reasons for the unpreparedness. It enabled the pandemic to bring countries, rich and poor alike, to the brink of collapse. Making the tax system just and equitable should be an essential component of “building back better”. Only in a country where tax justice prevails can a society have the resources to come to grips with this crisis and be better prepared to avert future ones.

All regions of the world demand tax justice

Income inequality remains highest in the region of Latin America. In April, the Tax Justice Network of Latin America and the Caribbean (Red de Justicia Fiscal América Latina y Caribe) urged all governments in the region to “seriously rethink their tax systems with the aim of reviewing the collection and transparency mechanisms, to allow a greater flow of resources from those who have the most, towards the ones that need the most.”

Tax Justice Network Africa calls for taking the crisis as an opportunity to overhaul the whole development policy and trajectory of the continent: “The COVID-19 pandemic has created an opportunity to address some of the underlying principles of neo-liberal economic theory and demand structural and systemic reforms for redistributive justice including progressive taxation reforms, and where the wealthy elite and multinational companies pay their fair share. It’s about creating an opportunity to re-examine the continent’s fiscal and economic-policy priorities and creating alternatives to the current structure’s economic model that is fit for purpose and reinvigorating the role of the State.”

In Asia, the Tax and Fiscal Justice Asia asserts that the impacts of the COVID-19 pandemic “could have been mitigated, or at least, weathered today with much less torment and suffering, had our governments valued people’s interests over greed and private gain. Billions of foregone revenues from tax breaks generously granted by governments to big corporations and the individuals who ultimately own them could have been used in strengthening essential public service delivery to ensure our rights to health, access to water and sanitation, decent housing and sufficient mass transportation services, among others.”

The lack of strong and well-resourced public services, coupled with highly privatised provision of essential services, means that the poor and low-income are severely constrained in fulfilling the most basic human needs to adequate water and sanitation facilities, decent shelter, adequate health services, including reproductive health, and public mass transport. In many countries, medicines and healthcare, water and electricity are covered by VAT, a regressive tax that unfairly hits the poor and low-wage earners hardest.

A great number are women who are in low-paying, insecure jobs and precarious livelihoods.  Because women proportionally spend more on household needs, they disproportionately bear the burden of VAT. By default, because of long-existing gender discriminations perpetuated by the deeply rooted patriarchy, they also spend longer working hours on top of their unpaid care work to sustain their basic needs, deepening their income- and time-poverty over time.

Women also heavily comprise the rank-and-file levels of public health sectors in many developing countries. Stagnant wages suggest both gender discrimination towards care work and gross under-financing of public health, as states cite lack of funds to rationalize more private investments in service delivery. In India and Pakistan, for example, a study conducted by Public Services International found that community health workers render services for the public healthcare system but do not receive salaries or social security benefits. Government health expenditures in South Asia averaged less than 1% of GDP (as of 2017, WHO). In the Philippines, registered nurses receive salaries ranging from only $158.54 to $267.54 per month. Like South Asia, out-of-pocket expenditures remain predominant in Southeast Asia, meaning that in various countries across the region, the enjoyment of the basic right to health – and by extension, the right to life – is contingent on one’s ability to pay.

The same is true in Africa. Presently, community health workers are neither paid nor remunerated across many African countries. In Kenya, for instance, the Ministry of Health does not consider them formal health workers. According to the African Medical and Research Foundation, community health workers play a critical role in saving lives, especially at the community level in rural areas and informal settlements where people lack access to the formal health system. For formal health sector employees, striking to demand for better wages and better work environment has become the rule rather than the exception.

The Public Services Day serves as an opportunity to underscore the need for more resources to address the funding shortages for the salaries of nurses and doctors who risk their lives on a daily basis as well as for the provision of quality and adequate medical facilities and equipment, especially in poor rural areas and informal settlements in cities.

The COVID-19-induced crisis, which started as a public health crisis is now unfolding as a socio-economic crisis of a global scale. Its devastating impact is disproportionate – affecting those at the intersections of inequality, the poor and vulnerable groups in each country more, and poorer nations harder than richer ones. The measures taken to respond to the crisis should consider the disproportionate nature of the impacts. But the measures taken so far by most governments are not adequate to achieve this. Worse, they risk aggravating inequality and the burden on the poor and vulnerable if they pursue policies that bring us back to the pre-crisis status quo: Bailouts for the rich, continuation of austerity measures, tolerance of profit shifting to avoid taxes, further facilitation of illicit financial flows, embracing regressive taxes while reducing taxes for the rich, leaving massive profits untaxed.

Developing countries are hit harder by the crises. At a time when more public resources are needed to strengthen the already weak public services, public revenues and export earnings have fallen dramatically. Illicit financial flows (mostly going to the North) are on the rise. Ill-advised policies tend to reduce corporate tax, allegedly to stimulate economic activities. International tax rules, which favour rich countries and deprive developing countries from their taxing rights, are still intact. Reforming the international tax system to make it work in the interest of developing countries has become more urgent than ever. The blockage by some rich countries of an intergovernmental negotiation to reform international tax rules within the auspices of the United Nations should end!

As we commemorate this year’s Public Services Day in the context of an unprecedented global crisis, we reinforce our resolve to fight tax dodging and renew our demands for a fair and equitable tax system, nationally and globally, to equip society with well-resourced public services. Therefore, we demand that our governments: