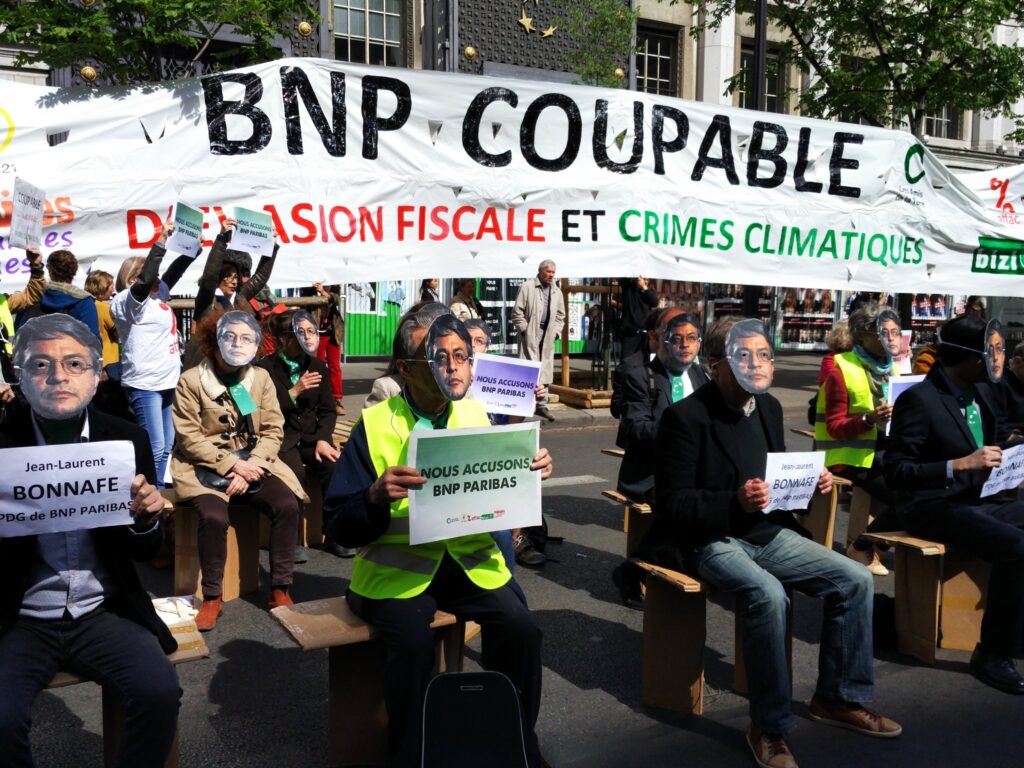 The core Global Week of Action to #EndTaxHavens, 1-7 April 2017, has concluded with countries taking a significant step forward for a UN Global Tax Body.

In a united statement late Friday 7 April in New York, the G77 and China called for the UN Committee of Experts on International Cooperation in Tax Matters to be upgraded to an intergovernmental UN Global Tax Body. The Global Alliance for Tax Justice is committed to continuing all efforts possible to see this priority objective become a reality. Congratulations and continued energy to tax justice activists everywhere in working with your national leaders to advance this issue.

Appearing in their distinctive white coveralls and t-shirts from Paris to Dijon, ATTAC France members and allies continue to take action – using humour and high-profile creative stunts to call out multinational tax dodgers including Apple, IKEA and McDonalds, and banks including BNP for their lack of transparency and financial ‘whitewashing’.

The initial proposal for a global action against tax havens originated with ATTAC network members. They’ve been well-organized and on the campaign frontlines throughout  the Global Week of Action to #EndTaxHavens in many countries including Spain, France, Germany and Canada.

More good news followed on Monday 10 April with word that the International Consortium of Investigative Journalists has been awarded the Pulitzer Prize for Explanatory Reporting for the Panama Papers investigation. This is well-deserved recognition for ICIJ and all of the journalists around the world who’ve contributed to this important exposé.

TJN’s April podcast will focus on the one-year anniversary of the #PanamaPapers, interviewing the ICIJ journalists “who got scoop.” The TaxCast team is currently gathering listener’s questions – you can address yours to @TheTaxcast.

In Brussels on Tuesday 11 April, as part of the Global Week of Action to #EndTaxHavens, GATJ’s Campaign & Policy Chair Tove Maria Ryding is a guest speaker at the event “The EU’s uphill struggle against tax dumping: 2 steps forward, 3 steps back?” hosted by ÖGB Europabüro, the Brussels office of the Austrian Trade Union Federation and AK EUROPA, the Brussels office of the Austrian Federal Chamber of Labour.

And the #EndTaxHavens campaign is exended this week in Burundi and Zimbabwe with national campaign launches of the #StopTheBleeding campaign. In Zimbabwe, Tax Justice Network-Africa is partnering with the Centre for Natural Resource Governance (CNRG) and faith-based organisationsin in the drive to end illicit financial flows. Follow the conversation through the Stop The Bleeding, Tax Justice Network – Africa and CIDEP Burundi twitter handles.

Many FACT Coalition members will be joining marches at the White House and in many other cities throughout the United States on Saturday, April 15, 2017, calling for President Donald Trump to release his tax returns.  See the Tax March link for more details.

Please see more photos and details of the diverse and impressive actions Global Alliance for Tax Justice members and partners have been engaged in around the world in this series of campaign updates over the week:

Brazil: INESC published a comprehensive article combining videos, facts, figures and a to-do list to find out “What can be done against Tax Havens”.

Global Witness and Finance Uncovered have released the new report “Shell Knew” which unveils damning new evidence showing that oil giant Shell took part in a vast bribery scheme that robbed the Nigerian people of over a billion dollars. Download the full report

NOTE: A stunning number of opinion editorials, blogs, reports and other publications from GATJ members and partners have headlined around the world for the Global Week of Action to #EndTaxHavens. See these listed in each of our campaign updates, plus more at this link