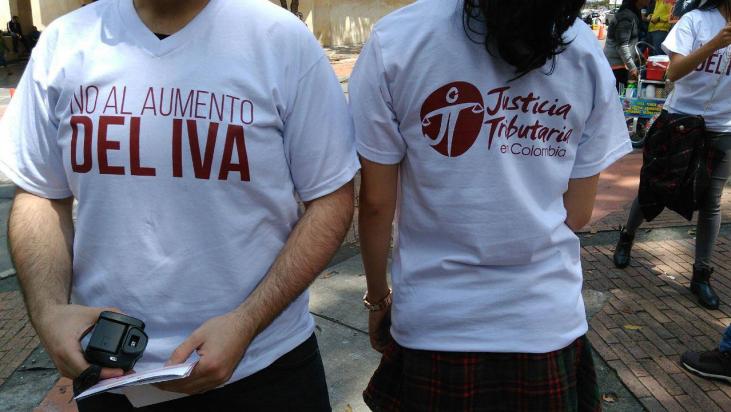 The Colombian platform for tax justice, Justicia Tributaria en Colombia, is leading a great campaign against a tax reform being discussed in the country. After two precedent tax reforms were accepted, to comply with international standards of the OCDE and IMF, the Congress is discussing a third one, aimed at raising the IVA by 3%, from 16% to 19%, “increasing the inequality in the country”, as evaluate the social movements, civil society and trade unions groups gathered in the campaign #TumbemosLaReforma.

Asking for a “real progressive reform that would comply with the objective of equity”, as stipulated by the Constitution, civil society demands acknowledge “the damage caused on public finances by huge tax benefits maintained for sectors such as extractives and finances, the important tax evasion both within the country and into tax havens, and the tax benefits conferred to monopolies and speculative entities”.

In the country with the highest inequality rate in Latin America (4th worldwide), #TumbemosLaReforma, (“Take down the reform!” in Spanish) addresses the need for Tax Justice through several societal issues: gender & tax, the inequality of taxes for SMEs, regressive taxes, etc.

Along with a letter to be signed and sent to the Congress, the campaign also counts with two petitions on Change.org, addressed to the ministry of finance and the ministry of work, already gathered 10000 signatories together.

While a short animated video compares the impact the VAT raise would have on a Colombian family with average income and on the President of the country (the Colombian family would spend 13 times more of their income to pay VAT than the President), a cartoon, several powerful posters, recurrent offline protests and events (such as the “tax-free periods” events) with and interviews capsules compose the diverse campaign portfolio of the campaign.

While the reform is currently being discussed, The Colombian civil society now needs our help to echo the campaign worldwide. You can follow their struggle on the Justicia Tributaria website and through #TumbemosLaReforma, on Facebook and Twitter.