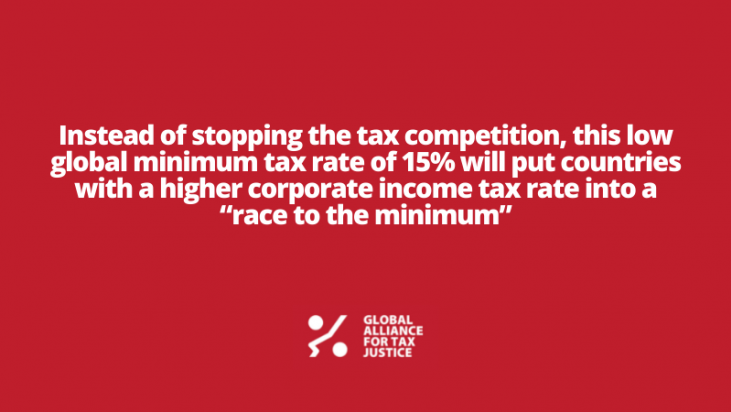 The Global Alliance for Tax Justice (GATJ) reiterates its concerns regarding the OECD-led Inclusive Framework (IF)’s unfair proposals for new global tax rules, which evidently do not address the fundamental problems of the current international tax architecture and ignore the developing countries’ interests. The OECD issued a statement this Thursday (1 July) on its “solution”, which  is based on the recent deal of the Group of Seven (G7) on a global minimum corporate tax rate of 15%, and disregards the suggestions, proposals and reservations that a number of developing countries have put forward throughout  many years of work.

The “solutions” do not address the root causes of the current practices and rules that incentivise profit shifting and facilitate tax dodging with impunity. The agreed global minimum tax of 15% is far lower than the world corporate income tax average of 25% and closer to the 12.5% proposed by low/no tax jurisdictions. As highlighted by Mathew Gbonjubola, Nigeria’s ambassador to the OECD, setting the global minimum at that level “would not do much to benefit countries in Africa” and was “likely to continually promote [tax] base erosion from African countries”.  Instead of stopping the “race to the bottom” tax competition, this low rate will put countries with a higher corporate income tax rate into a “race to the minimum”.

Limiting the scope of the OECD/IF “solution” to a hundred or so multinational corporations (MNCs) will not enable developing countries to raise more tax revenue from all MNCs. Further, higher percentage of the limited additional revenue the “solutions” may bring will disproportionally go to rich countries. A fair solution would and should have done the opposite – ensure that a higher percentage of any additional revenue made possible by a reform is allocated to developing countries which are more affected by profit shifting and the pandemic triggered socio-economic crises.

Far from ensuring the taxing rights of developing countries, the “solution” will limit the right to tax of source countries to a small proportion of MNCs’ profits and entrench taxing rights to headquarter countries over global profits.

The institutional arrangement in which these “solutions” are being “negotiated” lacks transparency and accountability. The “negotiations” behind closed doors expose developing countries’ representatives to political pressures and manipulation to agree to the deal of the rich.

A solution agreed in an informal and opaque process, outside the UN system and the participation of accountable country representation, cannot have the legitimacy to be a binding international agreement. A fair global deal is only possible in an open and transparent intergovernmental process, in which the public and civil society can hold negotiators to account for proposals and decisions, and in which the draft agreements are open to public scrutiny. Such a process is only possible within the framework of a UN based intergovernmental negotiations in which countries can participate as equals.

We therefore reiterate our call for the establishment of a universal, intergovernmental UN tax commission and negotiating a UN Tax Convention to comprehensively address tax havens, tax abuse by multinational corporations and other illicit financial flows.