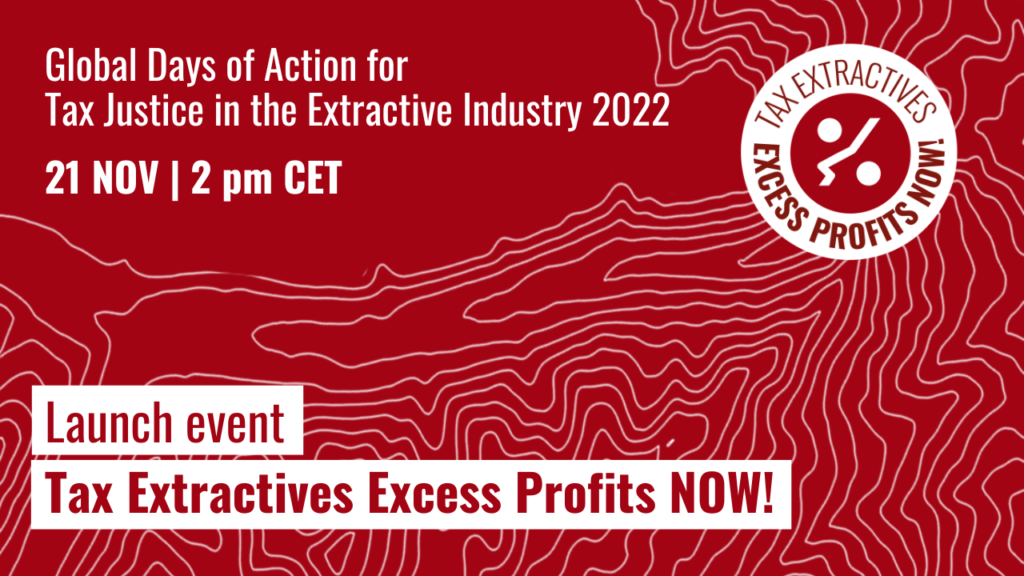 Bringing perspectives from the broader economic justice movement, GATJ kicks off week of action for tax justice in the extractive industry

The majority of people across the world are barely recovering from the socio-economic impact of the COVID-19 pandemic. According to a United Nations report, the number of people affected by hunger rose by 828 million in 2021, an increase of 46 million since 2020 and 150 million since the COVID-19 pandemic. Meanwhile, the richest people and corporations astronomically increased their wealth – and the extractive sector is among them. In 2022, the net profits of the 40 largest mining corporations in the world grew by 127% from last year, doubling their pre-pandemic revenues.

This week, the Global Alliance for Tax Justice (GATJ), its regional networks and partner organisations are together calling for these excess profits to be taxed for the benefit of communities and the environment that are negatively impacted by extractivist activities, especially in the Global South. GATJ launched its fourth Global Days of Action for Tax Justice in the Extractives Industry campaign on Monday (21 November) with the online event “Tax extractives’ excess profits now”, moderated by Riska Koopman, Policy Advocacy and Campaigns Coordinator at GATJ. The campaign runs until Friday, November 25, 2022, and the aim is to demonstrate solidarity and strengthen unity to end unjust tax and fiscal policies in the mining industry that deepen inequality and lead to austerity.

“We hope to join forces with other social movements, particularly in climate, labour and gender justice, that have been raising proposals for the extractive sector to operate with more responsibility toward communities and the environment. We are also hoping to contribute to the perspectives of the tax justice movement and the broader economic justice movement by calling for a rights-based economy that puts people and the planet at the centre of discussions and decision making,” said GATJ’s Communications and Campaigns Coordinator, Lays Ushirobira, in her opening remarks.

During the event, participants from Asia, Africa, Latin America and North America highlighted the catastrophic impact of the extractive sector on the lives and livelihoods of communities worldwide. They also emphasised the importance of taxing extractive corporations to ensure that the communities whose mineral resources are extracted benefit from these activities.

Tax Justice Network Africa (TJNA)’s Policy Officer on Tax and Natural Resources Governance, Mukupa Nsenduluka, said mining projects in Africa and the Global South destroy business opportunities for local businesses in different communities. She said instead of local suppliers benefiting from selling products and services, multinational corporations come into their communities with international suppliers of the same goods and services and take over from local suppliers.

“The other impact has been increased corruption levels by political elites.” Obviously, this speaks to illicit financial flows and corporate tax abuse issues, which also lead to state capture. “You find that governments are under the control of these big multinationals, even resulting in election financing and influencing election outcomes,” added Nsenduluka.

Young girls and women also experience high levels of gender-based violence when mining projects start in their communities, with a high influx of male migrant workers, and little to no opportunities for local women in those projects, leaving them without an income and vulnerable.

In Canada, over the last three years, the Wet’suwet’en communities on the West Coast have been fighting to defend their land against the installation of a gas pipe under the Morice River, which has provided these communities with sustenance over the years. The standoff with police became violent.

“So the government in Canada is literally going to war with its indigenous communities in order to protect oil and gas. Our country subsidises the oil and gas industry to such a large extent—15 billion dollars is the amount we are at now in 2022 in government subsidies to the extractive industry,” said Katrina Miller, Executive Director of Canadians for Tax Fairness.

Transparency was a big theme during the launch webinar, with panellists highlighting the importance of detailed, accurate and timely information from both governments and the extractives industry, as secrecy aids in widening the inequality gap.

Miller said, it is widely known that many Canadian mining corporations are getting tax breaks from their government for extractive exploration in other countries, however, there is a lack of transparency on exactly how much these companies are profiting from these tax breaks, despite their contribution to environmental and social degradation in other countries.

“What we are pushing for is what we call total and radical transparency. What we mean is that minerals are a shared inheritance; both the state and communities should be able to capture the full value of them.” Currently, all over the world, whatever is made out of selling minerals or extracting minerals is seen as revenue spent away by the government. What we are saying is that it’s like you are selling your house for silver. The state and the community should be able to capture the full value of this,” said Sreedhar Ramamurthi, a geologist at the Indian Institute of Technology and member of the Tax and Fiscal Justice Asia (TAFJA).

Nicolás Gutman, from Fundación SES and Red de Justicia Fiscal de América Latina y el Caribe (RJFALC), highlighted that of self-accountability in the mining industry has to stop as its one of the instruments that the extractives industry in Argentina and across the world use to avoid paying taxes. He said while some of these corporations pay taxes, there is nobody who actually does a thorough check on how much is extracted and the profits made from the extractions compared to how much tax is paid. With thorough checks and balances in this regard, tax justice can be achieved.

Watch the full recording of the webinar: