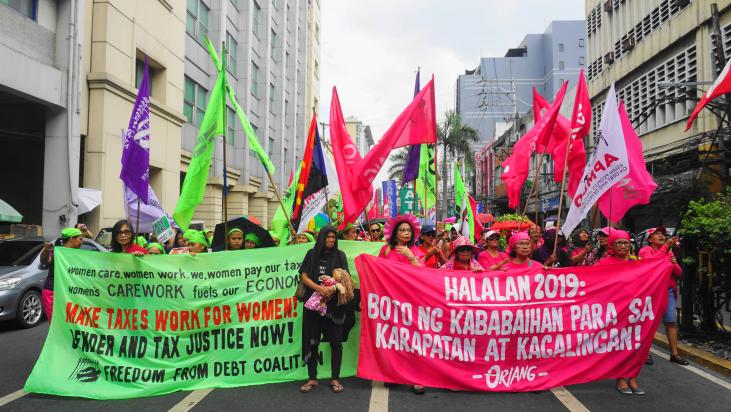 Marking International Women’s Day, many activists groups in various regions worldwide joined to demand that governments Make Taxes Work For Women. These kicked off the Global Days of Action led by the Global Alliance for Tax Justice (GATJ) and will continue with more actions until the close of the intergovernmental meeting of the UN Commission on the Status of Women (UNCSW), on March 22.

From New York to Buenos Aires or Manila, women’s organizations and allied movements held rallies, speaking tours, policy forums, and marches calling on governments to realize their commitments to fulfilling women’s rights by taking actions on tax and fiscal justice.

In Asia, GATJ’s regional network member TAFJA (Tax and Fiscal Justice Asia) and the Asian Peoples’ Movement on Debt and Development (APMDD) held women’s marches in Bangladesh, India and Pakistan on March 8, to highlight the global fight for tax justice for women’s rights and the broad call to Make Taxes Work For Women. Forums and seminars on tax justice and unpaid care work will also be organised in Indonesia and Bangladesh.

Social media actions also simultaneously mounted globally as TAFJA’s #8for8 selfie campaign reached its peak on March 8. This social media campaign, that began on August 8 last year, raised awareness on #TaxJustice for #WomensRights and generated support from other groups in other global regions.

In the Philippines, the women’s group Oriang, along with the members of APMDD and TAFJA, mobilized for a caravan on March 8. Their demands focused on the Philippine government to stop corporate tax abuses, reduce tax burden on women and allocate more tax revenues for social services. Oriang specifically called for scrapping policies in the “TRAIN” (Tax Reform for Acceleration and Inclusion) law, the Duterte government’s tax reform legislation that have triggered price hikes and contributed to deepening inequality in the country.

“Those who should be taxed are the rich, not the poor people like us who earn very little from selling goods in the sidewalks”, said Mutya Marangit, a street vendor and member of Oriang. “The TRAIN law should be abolished to reduce the suffering of the poor”. According to the joint TAFJA-APMDD-GATJ statement, “As women struggle against poverty and increasing economic marginalization, they are also facing increasing demands to shell out a bigger share of their income to pay for indirect taxes, such as the value-added taxes (VAT).” Since women are more likely to live in poverty than men and usually receive fewer wage than men, VAT has a disproportionately greater impact on women. Adding to women’s economic burden is the heavy burden of unpaid care work, which is not recognized and addressed in national tax and fiscal policies”.

Lidy Nacpil, co-coordinator of TAFJA and APMDD, said that “while women have to contend with discriminatory and regressive tax policies that tax the poor more than the rich, multinational corporations get away with tax abuses. The revenues lost from corporate tax abuses could have been used for gender-responsive social services and sustainable infrastructures that are vital for women’s survival and empowerment.”

In Latin America and the Caribbean also, the Women’s Movement showed its high level of mobilisation and its potential to transform the patriarchal system, which “expresses in diverse and numerous economic, cultural, social and symbolic privileges for men over women and other expressions of gender”.

On March 8th, organizations seeking tax justice as a tool to erase the enormous social inequality gap that exists in the region, highlighted the intimate relationship that must exist between the objectives of the women’s movement and those of the tax justice movement. Because, just as the slogan that was used on this occasion says – “There will be no gender equality without tax justice“. Organizations belonging to the GATJ’s regional network member Red de Justicia Fiscal (RJFLAC) and Latindadd expressed their position in this regard in a document published in Spanish and Portuguese, which was disseminated in the various marches, along with GATJ materials.

Beyond marches and repercussions in many countries of Latin America and the Caribbean, the days of action to demand that taxes effectively improve women’s lives will continue until March 22nd. During these days, the organizations will hold meetings, workshops, talks and various interventions to advance the gender and tax justice agenda.

In addition, women will have a space to exchange and plan actions on this agenda for the rest of the year, not only in the framework of the activities of the Assembly and Conference of Latindadd held in March in Mexico City, but also in the meeting of regional parliamentarians.

“Globally, tax avoidance and tax breaks to big businesses cost developing countries hundreds of billions of US dollars every year that could go a long way to transforming the lives of women and girls around the world”, reiterated Caroline Othim, GATJ’s Global Policy and Campaigns Coordinator in Africa.