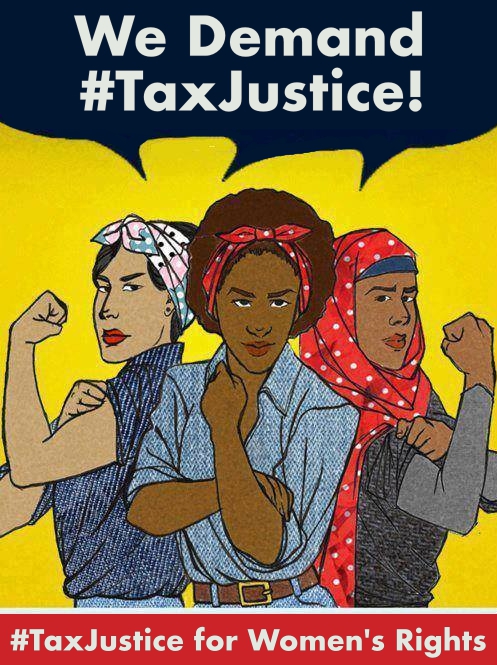 Meet the women around the world taking on tax dodgers

Working with the Global Alliance for Tax Justice, members of many of the world’s leading women’s, human rights, tax justice and trade union organisations united across borders in 35 countries (and counting!) for the first-ever #TaxJustice for Women’s Rights Global Days of Action, 8 – 24 March 2017. Together we called on governments to secure women’s rights and economic equality by taking action for tax justice.

This campaign has concluded on a note of victory, with the successful inclusion of important progressive tax policy references in the final outcome text of the United Nations Commission on the Status of Women 61st conference (UN CSW). Amongst other things, Governments have agreed to:

55.[kk] Take steps to significantly increase investment to close resource gaps, including through the mobilization of financial resources from all sources, including public, private, domestic and international resource mobilization and allocation, including by enhancing revenue administration through modernized, progressive tax systems, improved tax policy, more efficient tax collection and increased priority on gender equality and the empowerment of women in official development assistance to build on progress achieved, and ensure that official development assistance is used effectively, to accelerate the achievement of women’s economic empowerment in the changing world of work

The #TaxJustice for Women’s Rights Global Days of Action launched on International Women’s Day, 8 March 2017, and continued through to the end of UNCSW. During UNCSW, the Government of Ecuador and the Global Alliance of Tax Justice co-hosted a well-received official UN CSW event on tax justice for women’s economic empowerment. Turnout was also excellent for our high-powered CSO forum on tax justice for women’s rights. At the same time, public and social media actions took place in scores of countries around the world, from Ireland to Kenya to Bangladesh.

Across Africa, activists held public dialogue events in markets and universities and on twitter, put on a concert, spoke to journalists, lobbied policymakers and marched outside parliaments. In Asia, civil society groups organised a human chain, made videos, held demonstrations and issued press statements. Across Europe, women’s rights champions joined women’s marches with tax justice messages, held workshops with students and business leaders, put on a photo exhibition, and lobbied parliamentarians. In Latin America, advocates participated in photo actions and lobbied their governments.

Women, girls and our allies have been moved to take action for tax justice because the rights of women and girls around the world are being threatened by discriminatory global, regional and national tax policies. Current laws and practices enable multinational corporations and the very rich to, in many cases, get away with not paying their share of tax. This costs countries in both the South and North hundreds of billions of US dollars every year.

Tax dodging denies our governments of the key source of funding for the vital public services that can reduce or respond to violence against women and girls, provide universal access to public healthcare, ensure more girls get a quality public education, and support women’s economic equality and reduce their unpaid care work. Tax justice is is critical to realising women’s rights and gender equality.

Check out the thought-provoking blogs contributed by women’s and tax justice advocates for this campaign.

How high can you score on this quiz about tax justice for women’s rights? The average score is 46%, can you beat it? Test yourself!

*Thank you and congratulations to everyone who’s made this campaign such a great success!