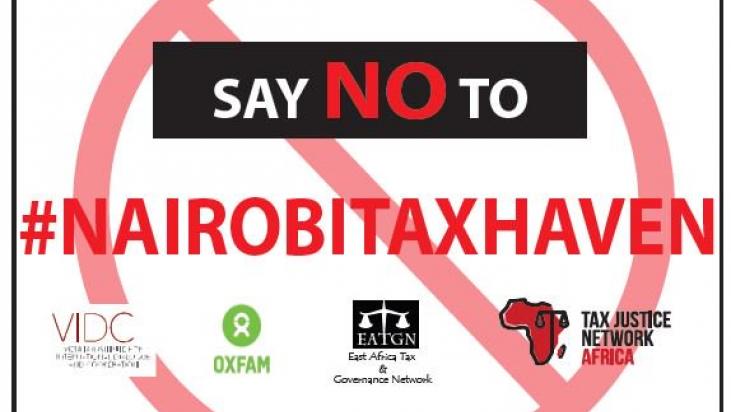 As the #EndTaxHavens week of action is blasting, Kenya and Africa are actually campaigning against the enactment of the Nairobi International Financial Centre (NIFC) Bill as in its present form, it presents the risk of functioning as a tax haven.

Tax Justice Network-Africa’s memorandum (pasted below) was shared with Kenyan MPs and was due to be read for the second time at the National Assembly yesterday.

You can follow the discussion with #endtaxhavens and #nairobitaxhaven, and help TJN-A address their MPs:

Let’s put a stop to #NairobiTaxHaven! If I pay taxes why should foreign companies be exempt from doing the same in MY country? #NotInMyName pic.twitter.com/zffVhDvlNV

The NIFC Bill provides for 100% foreign ownership. How about the interests of the #KenyanCitizen ? #NairobiTaxHaven

MEMORANDUM TO THE CLERK OF THE NATIONAL ASSEMBLY: NAIROBI INTERNATIONAL FINANCIAL CENTRE BILL (2016)

The below mentioned organisations have analysed the Nairobi International Financial Centre Bill that underwent its First Reading at the National Assembly on 2 March 2017. We appreciate the opportunity to present the following recommendations to enhance the Bill for the benefit of Kenya:

Recommendation: For public accountability and transparency any proposed tax incentive should also be subject to the approval of Parliament. Clause 36(2)(b) should be amended accordingly.

Recommendation: The type of activities that will be permitted in the NIFC need to be specified. As the Centre is intended to realise Vision 2030, it should prioritise activities under the flagship projects of Vision 2030 such as the LAPSSET project.

Recommendation: Clauses 3 and 32 should be reworded to state that the provisions of this Act shall be without prejudice to the Central Bank of Kenya Act (CAP 491), the Proceeds of Crime and Anti-Money Laundering Act (CAP 423), the Access to Information Act (CAP 31 of 2016), Anti-Corruption and Economic Crimes Act (CAP 3 of 2003), Public Finance and Management Act CAP 18 of 2012, Banking Act (CAP 488), the Capital Markets Act (Chapter 485A), Prevention Against Terrorism Act (CAP 30 of 2012), International Finance Corporations Act (CAP 466) and other affected legislation.

Recommendation: It must be emphasised that the development of legal, regulatory and institutional framework should be developed in the public interest and likewise that the benefits should be used for the benefit of the Kenya public.

These appointments are heavily influenced by the Office of the President who appoints the Chairperson (Clause 8(a) and who appoints all Cabinet Secretaries (under Article 152(2) of the Constitution) which in effect means that all members of the Board are either appointed by or associated with the Office the President thus limiting the independence of the Board. Likewise the establishment of the Steering Council under Clause 19 are by appointment by the President or Cabinet Secretaries, similarly inhibiting the independence of the Council.

Recommendation: Clause 8 should be amended to include representatives from the Kenya Revenue Authority and that the members of the Board are subjected to a vetting committee before being appointed and that the four other persons in Clause 8(e) represent the public interest.

Recommendation: The First Schedule should be amended to require the Board to submit a record of each imposition, waiver or variation of tax or licensing fee to the Auditor-General.

Recommendation: Clause 30(2) should be amended to read that it shall be without prejudice to Article 35 of the Constitution and the Access to Information Act.

It is our humble submission therefore that the review of the NIFC Bill considers the above proposed amendments. We are available to present and provide further information as may be required.