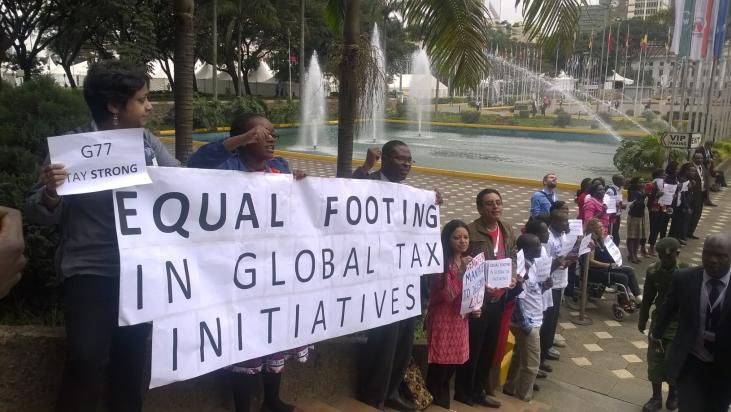 While UNCTAD meeting encloses in Nairobi and the final agreement is about to be published, civil society organisations collectively address UNCTAD’s most prominent challenges, sadly pointing out at many lost opportunity towards the “job that remains undone”… the first of them being taxation.

I would like to begin by extending our gratitude to the government of Kenya for hosting the CSO Forum, thereby continuing UNCTAD’s longstanding tradition of cooperation with civil society.

UNCTAD 14 takes place just a few months after the ambitious commitments made by all countries on the Agenda 2030 and its Means of Implementation, as well as the Financing for Development Third Conference in Addis Ababa. They were part of a gentle moment of multilateralism we lived last year. But this year, looking at the Financing for Development Forum and at this conference, it seems that moment has been just that, a moment, quickly fading away.

A few days ago, more than 400 CSOs delivered a strong message demanding that Member States strengthen UNCTAD’s mandates so it can effectively and fully support developing countries in facing such challenges and lay the basis for their structural transformation. Today I come on behalf of those same organizations to convey our concluding reflection on UNCTAD XIV Outcome.

It is true that the Outcome Document recognized several of those challenges and reaffirmed the mandates from UNCTAD XIII. In particular, the institution received mandates to continue working on:

–the global macroeconomic and financial trends exposed and created by the global financial crisis, their systemic sources and their spillovers in developing countries,

–on responsible lending and borrowing and a range of other debt issues,

–on Financing for Development, through a newly-created Inter-Governmental Expert Group – although we would have hoped that did not require the sacrifice of existing Expert Groups and resources,

But, Your Excellencies, we would not deserve the name of civil society if we did not own up to our role as the conscience of this conference, and reminded everybody of the job that remains undone. Today we also want to convey our sadness at the lost opportunity to give UNCTAD more tools on other issues critical for developing countries to implement Agenda 2030.

On taxation, UNCTAD 14 sadly became yet another example of how determined rich countries are to ensure the exclusion of developing countries, not just from decision making on tax matters, but also from the possibility of getting independent advice on how to stop the enormous losses of money they suffer from illicit financial flows, including tax avoidance and evasion. In the negotiating text, we first saw deletion of the right of developing countries to participate on an equal footing in international tax forums. Second, the intergovernmental expert group on tax was stripped out of the text. And lastly, the references to expanding the mandate of UNCTAD to do more work on tax were deleted. To be clear, we strongly appreciate the work that UNCTAD has been doing on tax, and we look forward to receiving more outputs. But continuing business as usual is not going to be sufficient to ensure that developing countries have the tools they need to overcome the immense challenge of halting illicit financial flows.

We would have liked to see a bolder mandate to engage in reforms  of investment agreements and their dispute settlement systems, which have proved inimical to poor countries’ development aspirations, and to enlarge policy space for regulations that safeguard people’s human rights, sustainable development and gender equality,

The Outcome places too much hope on Public – Private Partnerships, without frameworks for accountability to ensure they deliver on development,

On trade, at a time when the inequality and unrest triggered by globalization are haunting the fabric of entire societies, we would have liked a clearer mandate to examine the pros and cons of trade liberalization, engage in the critical rethink of trade rules and recommend ways to fulfill the WTO Doha Development mandate,

On global value chains, a stronger mandate to work on their governance, so as to address unfair distribution of gains across the chain, and detrimental impacts on employment conditions and inclusive growth, was needed,

On gender equality, the Outcome should have dealt with women and girls’ entitlement to human rights as the ultimate goals global and national economies should be transformed to achieve, but instead chose the dangerous road of “Gender Equality as Smart Economics.”

As civil society, we are here to reaffirm our intent to continue our focus on aligning UNCTAD’s mission with the development aspirations of the millions of disenfranchised and poor who are being left behind by the existing global financial, investment and trade architectures.