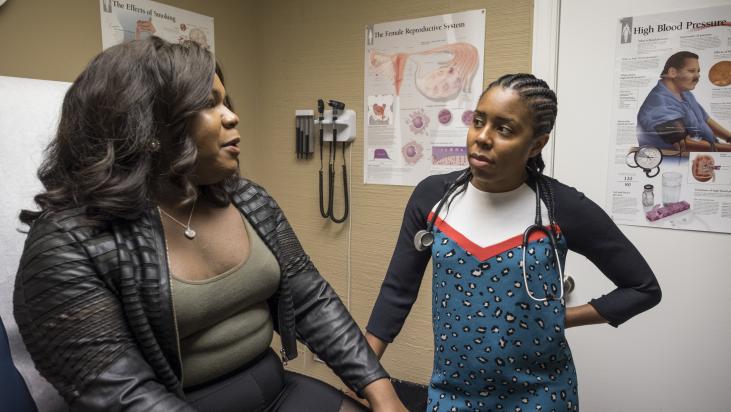 By Roos Saalbrink and David Archer*

Tax justice is ever more urgent to achieve women’s rights in the current austere fiscal context as the way to redistribute scarce resources equitably. Women bear the brunt of austerity measures, especially cuts to public services, as they are more likely to work in the public sector, 90% of nurses are women for example. This stems from gendered inequalities and social norms for care provision, meaning that women take on a disproportionate amount of additional work to fill the care gaps left behind when public services are cut. Women literally are the shock absorber of austerity, thereby disguising from the public eye the full human cost. This is rooted in the disproportionate unpaid care and domestic work women do, an estimated 76% globally. If valued on an hourly minimum wage this would amount to 9 per cent of global GDP about US$11 trillion (purchasing power parity 2011), a likely underestimation.

Over the past forty years austerity policies have led to cuts in the public sector workforce that have undermined the ability of governments to deliver quality public services. Whether imposed by the International Monetary Fund (IMF) or ministries of finance one of the central austerity policies, public sector wage bill constraints, impacts public services the most. This has been the focus of ActionAid’s new report, published with Public Services International and Education International, The Public Versus Austerity: Why public sector wage bill constraints must end. This report is based on intensive national research and dialogue with allies and government ministries on trends in public sector wage bills in ten countries: Brazil, Ghana, Malawi, Nepal, Senegal, Sierra Leone, Tanzania, Uganda, Vietnam and Zambia. It also draws on secondary research, reviewing 69 IMF Article IV and loan documents across 15 countries over the past five years.

(Photo: ActionAid – “Given they are so under-staffed and over-worked it’s incredible that frontline nurses like Mary in the Upper West State of northern Ghana can keep smiling”, said Saalbrink)

Our report concludes that the use of public sector wage constraints is both blunt and ineffective, often damaging the very sectors that governments and the IMF claim they want to protect. The research exposes how IMF austerity cuts in just 15 countries have blocked the recruitment of over 3 million nurses, teachers and other essential public sector workers. In the context of a global shortage of 5.9 million nurses, this has undermined the capacity of many countries to address the pandemic. These cuts have directly led to blocking the recruitment of new nurses as well as teachers and other essential workers, even where there are severe shortages.

Moreover, the same public sector wage constraints put strict limits on the already low pay of existing health, education and other public sector workers, undermining both recruitment and retention of qualified staff. The effect is to undermine progress on health, education, gender equality and other development goals – whilst also blocking effective climate action in some of the world’s poorest countries (where public services are a key part of supporting a just transition). The research additionally revealed that, despite the known harm of austerity, there was no serious or systematic ex-ante or ex-post assessment of key worker shortages in health and education to inform cuts or freezes, and no attempt to project the impact of wage bill constraints.

The central rationale for imposing austerity measures offered is to stabilise or decrease debt levels, to prevent defaults and to ensure that countries can continue to service their existing debts – and access future loans. However, our research found that no consistent advice was given by the IMF to countries about how to increase fiscal space, for example by increasing tax revenues through progressive reforms. Despite claims that public sector wage cuts should be accompanied with action to expand tax revenues, most countries experienced decreasing, stagnating and/ or inadequate tax-to-GDP ratios. Even the few countries that expanded tax revenues were advised to cut spending on the public sector wage bill, demonstrating that it is not evidence and people’s lived realities that drives the pressure to cut public investment, but neoliberal ideology – or what we call a ‘cult of austerity’.

Our report argues that, in the light of intersecting crises, there is an urgent need for a radical rethink, of past policies and practices placing frontline public sector workers at the heart of the post-COVID recovery and the transformative responses needed to reverse the climate crisis – to ensure a more caring, feminist, green and just future. The international financial institutions have failed to respond adequately to the present crises. Debt suspension has been too limited in scope and timeframe, the OECD-led corporate tax ‘deal of the rich’ only benefitting the richest countries, and other interventions like the issuing of Special Drawing Rights will do little to help unless there is a bold commitment to reallocation and redistribution. If anything, emergency loans issued during the COVID-19 pandemic have further strengthened the power of the IMF.

Despite some shifts in rhetoric from its headquarters, the austerity-based policy reforms that countries agree with the IMF, either as conditions or coercive advice, are unchanged. Alarmingly, the recent Global Austerity Alert projects that 159 countries face serious austerity in 2022. The consequences of these austerity measures for accelerating gender equality are dire, exacerbating the already serious regressions in women’s human rights. There is an urgent need for the cancellation of unrealistic debts, the creation of a sovereign debt workout mechanism and global tax reforms that would actually benefit the global South, as the leaked Pandora Papers have reconfirmed.

These ideas and many others were raised and explored during the Tax Justice and Gender Equality Conference 2021, as organisations and individuals from around the world came together to demand wider changes to the international economic order. After forty years of shrinking and squeezing, we have had enough of the outdated concept of austerity, of an economic system that hides and obscures women’s values, work and contributions, that exploits the planet and allows the extraction of wealth into the hands of a few. The time for a feminist, just, green economy and to end austerity is now!

* Roos Saalbrink is a feminist and economic justice activist passionate about creating inclusive spaces to discuss women’s rights. She is Policy Adviser on Economic Justice and Financing for Development at ActionAid International, looking at the structural causes of women’s economic inequality through a feminist analysis of the current global political economy, while advocating for gender responsive public services. Previously, she worked at Womankind Worldwide, co-coordinated GATJ’s Tax and Gender Working Group, served as member of GADN’s Advisory Group in the UK and worked as World Bank Gender Project Lead & Communications Manager at the Bretton Woods Project.

David Archer is Head of Public Services and Civic Participation at ActionAid International.