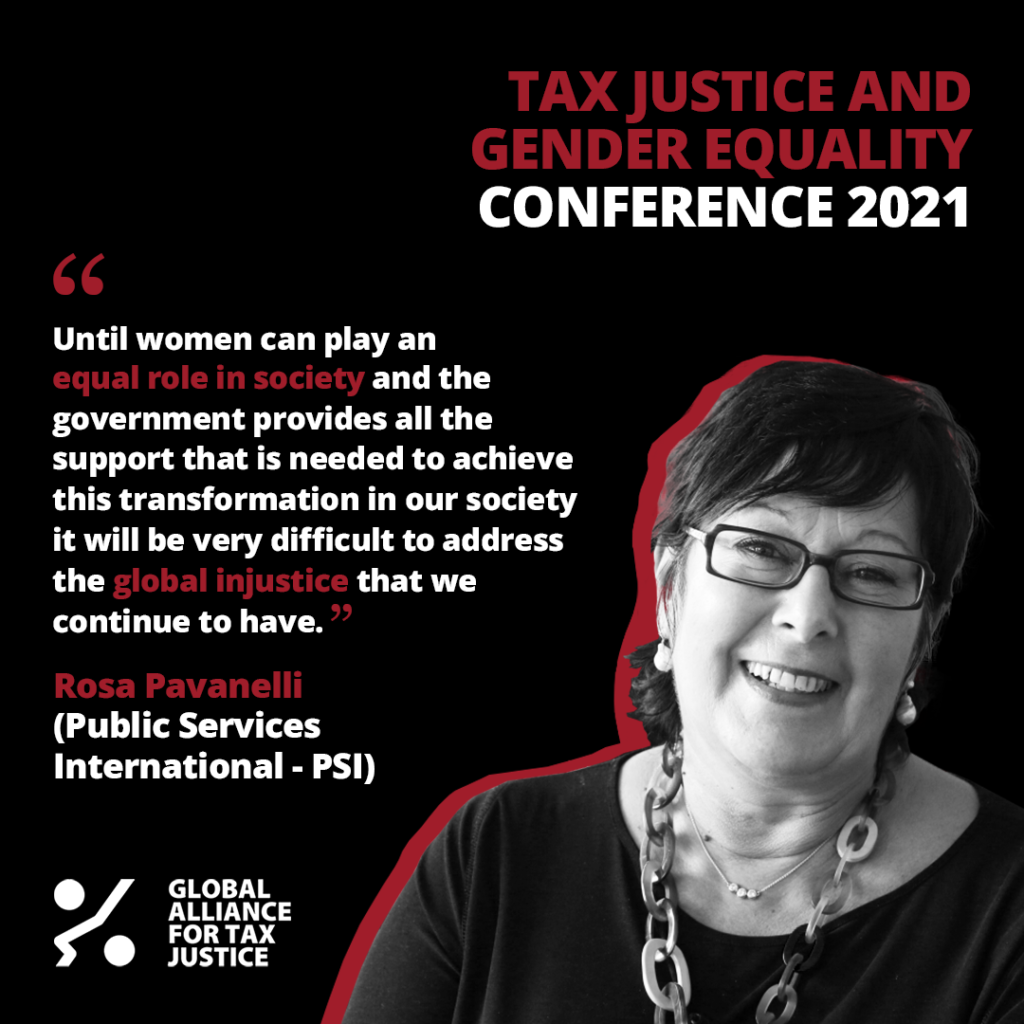 Changing the Course and the Discourse on Care

Since November 2020, Public Services International (PSI), has been focusing its work in shifting approaches from the care economy to the social organisation of care (SOC). The world needs a new model which “puts caring for people ahead of caring for-profits”, as Rosa Pavanelli, PSI General Secretary, highlighted during her participation in the Global Day of Action for Care and the Tax Justice and Gender Equality Conference 2021.

We call for 5Rs as a way forward for fixing the care crisis, which was exacerbated during the COVID-19 pandemic: Recognising, rewarding, reducing, redistributing and reclaiming care work is the essential method needed to create a system which truly cares for us all.

In March 2021, in the context of the United Nation’s 65th Session of the Commission on the Status of Women (CSW65), PSI with a group of progressive feminists, human rights and tax justice organisations – including DAWN, CESR, ActionAid, Womankind Worldwide, the Global Alliance for Tax Justice (GATJ), GI-ESCR, FEMNET, TJN – jointly launched the Care Manifesto: Rebuilding the social organisation of care and called for building a global movement in support to the cause. It has been endorsed by 427 organisations and individuals worldwide, and is still open for new endorsements here.

Together we have developed a new platform to maintain pressure and raise impact by developing further action lines in a political programme that was released on 10 December 2021, International Human Rights Day.

Click here to listen to LabourRadio, PSI’s podcast episode with Rosa Pavanelli underlining the 5Rs of the Care Manifesto. The struggle remains actual for the accomplishment of the four pillars of the International Labour Organisation (ILO)’s decent work agenda: full employment, social protection, rights at work and social dialogue, which together constitute the fundamental endeavour of unions to ensure that care workers are at long last rewarded for their strategic and essential role in society.

Our global study “The social organisation of care: A Global Snapshot of the Main Challenges and Potential Alternatives for a Feminist Trade Union Agenda” contributed to the debate on how to advance a care agenda for transformation, based on the principles of social co-responsibility, equality, and decent work. The study provides an overview of fundamental notions that affect our understanding of how care is organised. It used case studies from eight countries of the global North and South in four regions: Canada, Argentina, South Africa, Kenya, Austria, Poland, Australia, and India. It is centred in five thematic areas: i) time use and unpaid care work; ii) care-related leave schemes; iii) care services; iv) working conditions and social protection for care workers; and v) migration and care work.

The social organisation of care in Latin America

Meanwhile, the process in Chile for writing a new Constitution has provided a further political opportunity for developing the foundations on which to build support for the idea of RSOC, beginning with the recognition of the human right to care, the fundamental role of the State in responsibility for the SOC, and organising a public care system that guided by the approaches of gender transformative and decent work. Case studies on care policies in Mexico, Ecuador, Chile, Uruguay were examined to guide the Chilean proposal. In addition, a further study in Latin America is gathering more evidence on how to advance on RSOC with case studies of national and local governments (Mexico, Costa Rica, Bogota City, and Argentina), that have enhanced public policies on care.

In the Latin-American region, as a result of feminist struggles, a consensus is growing to recognise the economic value of unpaid care work in society and reduce the burden of unpaid care work on women by redistributing it among all members of households.  However, public provision of care and the state’s main responsibility in the provision of public care services is weaker, as is the decent work agenda for care workers, especially when dealing with collective rights at work allowing unions and care workers to negotiate and be represented in the discussions and decision-making processes relating to the core demands for change in the sector.

* Verónica Montúfar is sociologist and political scientist with a master’s degree in Political Sociology. She has worked with Public Services International (PSI) since 2002, currently as Equalities Officer. Previously she worked as executive secretary of Amnesty International in Ecuador; as trade union educator at the Ecuadorian National Trade Union Center (CEOSL), and researcher on gender history.