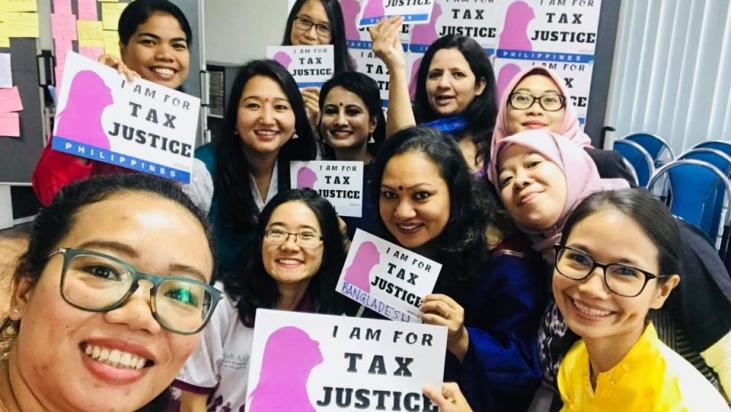 A selfie challenge for tax justice and women’s rights

On 8 August 2018, the Global Alliance for Tax Justice’s regional network member Tax and Fiscal Justice Asia (TAFJA) launched the campaign, “Eight for Eight: A Social Media Campaign on Tax Justice for Women’s Rights” or “#8for8 Initiative”. For eight days, on the eighth of each month starting 8 August 2018 until 8 March 2019, women are encouraged to post selfies in different social media platforms to raise public awareness on tax justice and women’s rights issues in the region. The initiative was launched during a regional workshop of activists and campaigners in Hanoi, Vietnam.

TAFJA believes that the State’s authority to tax is a public trust that rests on the State’s duty to fulfill its obligations to its citizens and its duties as a member of the international community. Yet in Asia, as in most developing regions, tax revenues are not often spent to improve the lives of the poor and marginalised groups. In many cases, tax policies privilege the narrow interests of the elite and big business corporations, and disadvantage the poor and the marginalised, especially women.  The #8for8 Initiative aims to highlight these issues in social media posts. A specific theme will be featured every month during the 8-month campaign period. As the launching day, August 8th was mostly about introducing the campaign and why tax justice is relevant for women.  Fyfe Strachan of ActionAid Vietnam expressed her appreciation about the work that tax justice  campaigners in the region do and used the opportunity to introduce the #8for8 Initiative in her Facebook post. She wrote, “Today is Day 1 of the #8for8 campaign for tax justice. I’m in great company with some fired up tax campaigners from around Asia. On any given day you will find them investigating tax avoidance, campaigning for tax regimes that don’t punish the poor and holding their leaders to account. But today, we selfie. Together with Tax and Fiscal Justice Asia we will be posting a themed selfie on the 8th of every month for the next 8 months to promote #taxjustice for #womensrights.”

Meanwhile, CJ Galunan from the Philippines used her selfie to underscore the link between tax justice and human rights. She posted, “In the time of Duterte, tax is more than just a matter of reform but a matter of [in]justice. There is no acceleration without human rights; no inclusion without accountability. Although #TheBurdenIsBiased, we, women, will fight.” Some activists like Herni Ramdlaningrum from Indonesia took selfies with fellow train passengers and took the opportunity to explain to them the purpose of the campaign on tax justice for women’s rights. Meanwhile, other activists utilised the campaign to call for the fair use of taxes, especially in guaranteeing that basic services and infrastructure are provided to the poor. An Nguyen from ActionAid Vietnam demand for better roads so that students can go to school safely.

On the third round of the #8for8 Initiative on October 8th, the key campaign message will be “Tax should not be a burden to the poor!” Activists and campaigners are invited to take selfies of commodities that are regularly consumed by ordinary people and are charged with high value-added taxes (VAT)/goods and services taxes (GST). This is to show that the most hardly hit by the impacts of VAT/GST are the ordinary and marginalised people.

TAFJA is an alliance of movements, people’s organisations, NGOs, and networks in South Asia, East Asia, Southeast Asia, and Australia. It advocates for just and progressive reforms of tax policies, strong enforcement and accountability mechanisms that put an end to the use and abuse of tax policies by corrupt individuals and TNCs, and for transparent, accountable mechanisms, and participatory budget processes.  To get updates the #8for8 Initiative, follow the TAFJA Facebook page!