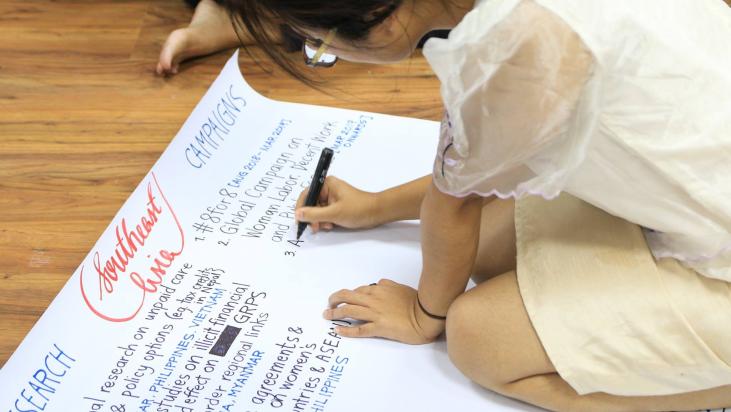 Last August, ActionAid Vietnam, in collaboration with Tax and Fiscal Justice Asia (TAFJA), organised a regional training on “Campaigning on Tax Justice and Women’s Rights” in Hanoi, Vietnam. Twenty-seven activists, campaigners, and development workers from 10 countries in Asia took part in the training.

The four-day training aimed to build the participants’ understanding on tax justice issues that impact on women’s rights, bring tax campaigners together to strengthen existing networks that work on the issue, and develop a joint work plan for campaigning on tax justice and women’s rights in Asia. The diversity of the participants encouraged active sharing of knowledge on tax issues (particularly progressive taxation), discussion of the link between taxation and gender-responsive public services, and exchange of experiences and ideas in advocating and campaigning for tax justice and women’s rights.

Lidy Nacpil, co-coordinator of TAFJA, highlighted the implicit biases of tax systems and fiscal policies against women. For instance, in the Philippines and other countries in the region, single women, who are the sole breadwinners in their households, bear more tax burden than a household with two or more income-earning individuals. Meanwhile, value-added taxes are also applied more on women-specific products, such as sanitary pads. Additionally, unpaid care work is not recognised as work and as an important contribution to social reproduction. The participants agreed that unpaid care work should be recognised as a relevant economic contributor through progressive taxation policies, such as by granting unpaid care workers with additional tax credits. In this regard, Kasia Szeniawska of ActionAid International underscored the importance of progressive taxation policies in fighting gender-based inequality.

The training also served as a platform for ActionAid to share its Global Campaign on Women’s Labour, Decent Work, and Public Services. In ActionAid’s campaign framework, progressive tax and fiscal policies should play a major role in providing gender-responsive public services. On the other hand, the training also became an opportunity for TAFJA to launch the campaign initiated by its Tax and Gender Working Group — the “Eight for Eight: A Social Media Campaign on Tax Justice for Women’s Rights” or the #8for8 Initiative. The #8for8 Initiative is a social media campaign to raise awareness on tax justice and women’s rights, which will run every 8th of the month for 8 months from 8 August 2018 to the International Women’s Day on 8 March 2019.