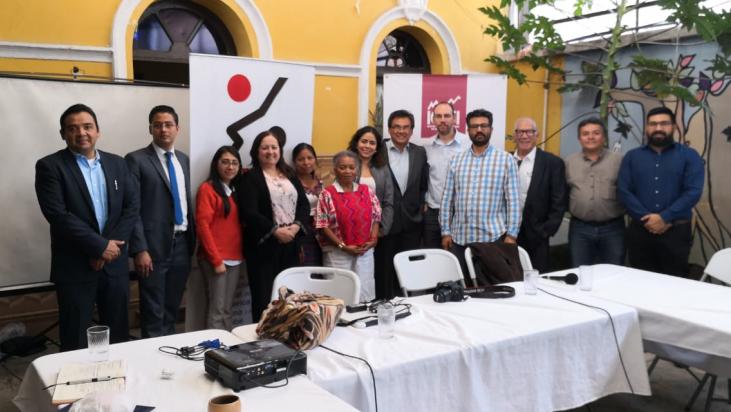 The Tax Justice Network for Latin America and the Caribbean, regional member of the Global Alliance for Tax Justice, organizes regional campaigns and tours across the continent, collaborating with network committed member Latindadd (Latinamerican Network on Debt, Development and Rights). The last “gira” (tour) was in Central America, in Salvador, Honduras and Guatemala, from September 8, under the theme “Tax Justice is Social Justice”. Workshops with partners of the campaign and activists, members of civil society, meetings with officials, and debates were amongst the activities proposed.

One of the major successes of the Regional Campaign for Tax Justice has been to promote and stimulate debate about tax issues and tax reforms, following the conclusions shared by Rómulo Torres (Latindadd), the campaign’s coordinator.

Rómulo Torres, Regional Campaign for Tax Justice coordinator, speaking during the coloquium “How to promote an equitable taxaction”

“In a context of corruption scandals, and the insitutional crisis these entail, leading to confrontation between branches of the government in some cases, the debate on tax issues and reform has become the center of attention. The objective is to discuss tax issues and reform and align them with institutional reforms”, according to Torres, sharing a first assessment of the impact of the Regional Campaign for Tax Justice’s promotion and dissemination.

Torres added that, for example, “in the case of Salvador, the debate over tax issues happened in the context of the New Tax Agreement proposal (Nuevo Acuerdo Fiscal). As well as in Honduras, where a Fiscal Deal (acto Fiscal) is discussed, and without this agreement there will be no Social Justice”.

The situation in Guatemala is similar, where tax justice and the debate around it intertwine with the rural development, according to Torres.

Hugo Roldán, from ICEFI, exposing activities developped in Guatemala to the audience.

Tax and gender were also discussed, as crucial themes regarding how to build a more just and equitable society. In Guatemala for example, civil society has shown great interest in the campaign activities that took in consideration differenciated impacts by gender, and by community or town, as it could be native (“indígena”) or afrodescendant for example. In particular during the coloquium “How to promote an equitable taxation”, organized during the dissemination activities of the Regional Campaign for Tax Justice.

As part of the tour, the Continental Political and Social Agenda for International Tax Justice was presented to the committed and interested partners in the fight for tax justice, containing the principal proposal and guidelines in order to obtain more just and equitable societies.

In Honduras and Salvador alike, the different actors expressed their concerns regarding tax issues in their country, and also their determination to find ways to participate in the tax debate with their governments.