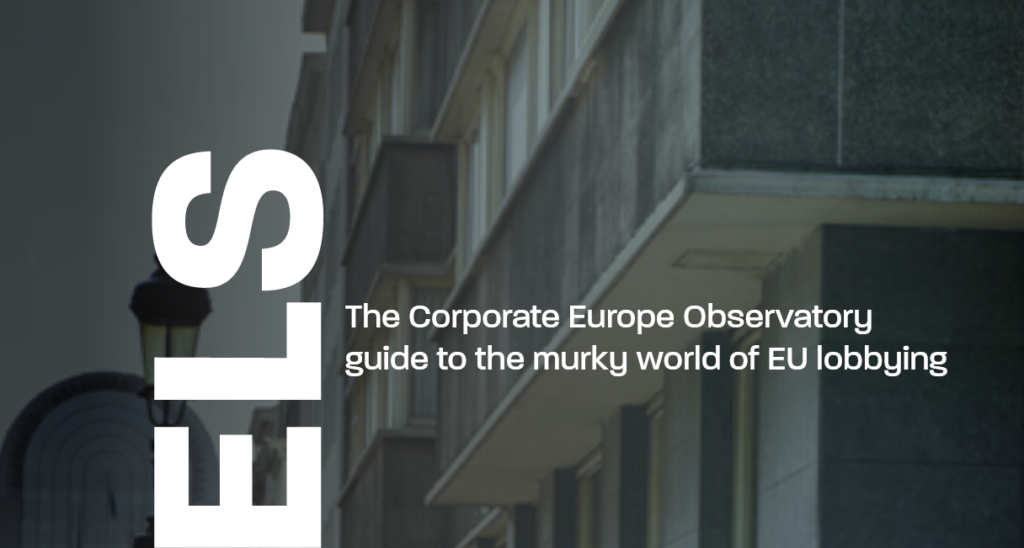 Brussels-based Corporate Europe Observatory, who works “to expose and challenge the privileged access and influence enjoyed by corporations and their lobby groups in EU policy making”, just published its report on Corporate lobbying in Europe.

Titled “Lobby Planet”, it is presented and designed as a tourism guide “to the murky world of corporate EU lobbying” and “trace[s] the invisible lines of political power that criss cross the city to give you an idea of how lobbyists work, introduce you to the big players, show where they meet, and what issues they focus on”.

“The ‘Brussels bubble’, says CEO, is a small community where insider knowledge is a highly prized commodity. The various influencing channels, a plethora of – often dubious – lobby tactics and the poor transparency of it all have created a complex and opaque world out of the public eye. This guide book is an attempt to shed light on some of the main corporate lobby actors in the city and encourage public scrutiny as a crucial feature of a healthy democracy.”

More than 25,000 lobbyists are estimated to be working in Brussels. The report/guide starts by summarizing How EU laws are made before introducing to the several kinds of lobbyists: Lobby consultancies, NGOs and trade unions, law firms, corporations, industry lobby groups (trade associations and cross-sectoral lobby groups), think tanks. It then presents the many influencing tactics used by corporate lobbyists, which they labelled “Repeat, repeat, repeat”, “Throw money at it”, “Blur the lines” and “Delay and distract”.

“Should tax dodgers and their advisors craft tax policy?” asks CEO as an example, when its “research shows that despite a new policy for publishing declarations of interest, less than half of the experts on the [expert panels and advisory groups] that were investigated can be considered free of conflicts of interest”.

In the prominent Geographic Guide section, you can locate banks-related lobbyists, International Swaps and Derivatives Association, the European Round Table of Industrialists who “focuses on big picture strategies including the ongoing work to lower corporate taxes across the continent” or the Maison du Luxembourg where, “just as companies swarm to Luxembourg to dodge tax, lobbyists flock to eateries like to evade prying ears and relax in a haven of nibbles, news and gossip”.

Then a Thematic Guide outlines “seven industries, which have been fighting some of the most controversial and expensive lobbying battles in the past years”: Tech, Trade, Finance, Agribusiness, Big Polluters, Tobacco, Arms.

The What you can do!  section offers ideas on “how you can help balance the forces in the fight for democracy, accountability, and the public interest”.

The publication ends up with a quite helpful “jargon-busting dictionary”, to guide you through the jungle of EU acronyms and policy terms and “make it easier to understand what the EU’s political and economic elites are actually talking about!”

The guide also presents its methodology, obviously – underlining the fact that all the figures used in the guide are extracted from the EU Transparency Register… although “under-declarations of lobby spending [is] the most common error”. So much for public scrutiny of lobbying…