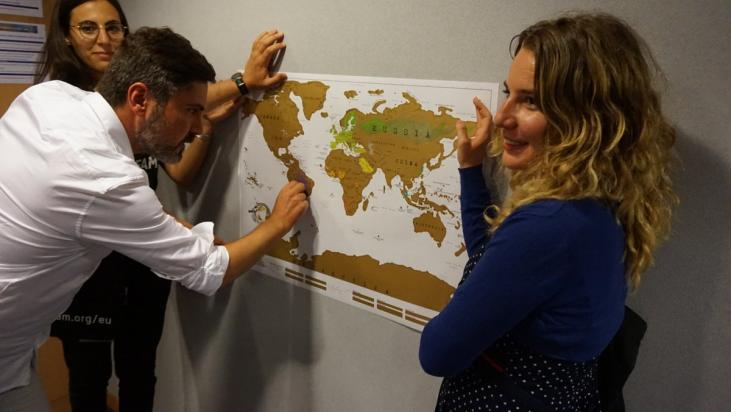 While the crucial ECON and JURI committees vote was supposed to take place on May 30th, various civil society organizations organized a creative stunt in Brussels the day before: after weeks of lobbying, letters, advocacy meetings, panel events, 350,000-strong petitions, twitter storms and videos, they finally decided to offer a targeted list of MEPs a scratch map (a decorative map where you can scratch off countries) … which they used for a very different purpose!

Current #CBCR only scratches the surface. Need #taxtransparency for ALL countries. Like @Lamberts @sven_giegold vote for public #CBCR tmrw. pic.twitter.com/374SNMnHRl

As the Global Alliance for Tax Justice’s regional network member Tax Justice Europe explains, “the current proposal on CBCR means that citizens from most countries outside of Europe won’t be able to see what companies are up to in their countries and to hold them to account. In other words, the current proposal just scratches the surface and we will still be going into the battle blind when it comes to the fight for tax transparency”.

In Austria, ATTAC and NGOs, amongst which Tax Justice Europe’s member KOO, welcomed the fact that national MPs Othmar Karas and Evelyn Regner supported public global CBCR together in a joint press conference, which facilitated a good media coverage of the issue.

EPSU, the European Public Service Union, published a short piece on its website, entitled ‘Six Reasons Why Tax Inspectors Want Public Country-by-Country Reporting’. It contains six quotes from those working in tax administrations and their representatives, with the aim to dispel some of the myths that are circulated by public CBCR’s detractors, suggesting that the measure would somehow undermine tax administrators’ work. “The European Union is currently debating proposals to make corporate tax more transparent, says EPSU, making it clearer if a multinational is paying tax where it should be. BusinessEurope keeps claiming that this measure, known as public country-by-country reporting, would undermine tax administrations. They wrote a letter to the chair of the European Parliament’s economic affairs committee saying as much. James Watson, the business confederation’s Director of Economics again made the claim at a recent parliamentary hearing. What they fail to mention is that those working in tax administrations support public country-by-country reporting”. Read the whole text here, with quotes from France, Spain, Belgium, Germany, Sweden and Ghana.

Finally, the CBCR vote in the European Parliament has been postponed – until today, June 12th. With the delay in the voting, civil society has a last chance to increase the lobby for an ambitious #TaxJustice outcome!

MEPs have delayed crucial #taxtransparency vote. Citizens are demanding public #CBCR – when will we get urgently-needed reforms? pic.twitter.com/0zRLJ5U1O6

You can help engaging MPs with Eurodad’s comprehensive and intuitive website endsecrecy.eu – from which you can dirfeclty tweet all MPs, in all languages!