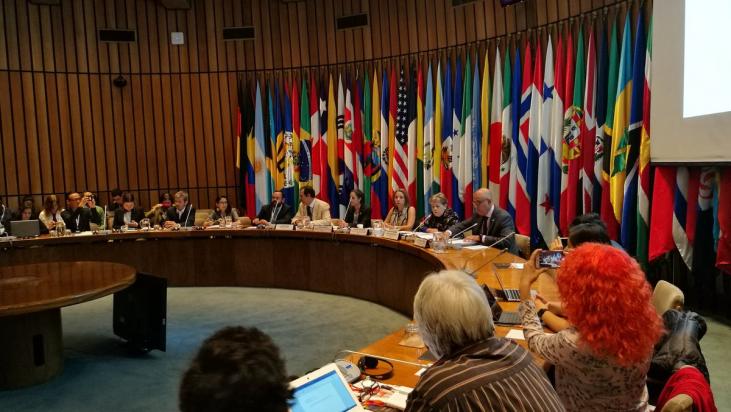 Latin America: “Money for the #SDGs is lost through Tax Injustice”

As introduction, Coronado highlighted “the points that civil society has in common with the Economic Commission for Latin America and the Caribbean” (ECLAC), in the analysis of the region and explained how in recent years, “development aid” has been replaced by the “financing  for development” vocabulary: “What has happened is that the rich North is disregarding its responsibility to have created a poor South”, Coronado says. He also criticized the current tax system of most countries in the region, where the regressive schemes make those who have less pay the most. “The regressivity (of the taxes) is event more accentuated because in our countries, we have either none or very low wealth, rent and capital gains tax levels. In Latin America, those who pay more taxes are those who have the least. And if we add to that the tax fraud, illicit financial flows (which in 80% of the cases have their origin in commercial activities)…”

Coronado, former president of Latindadd, also explained that the region does have the necessary resources to finance the 2030 Agenda and the Sustainable Development Goals, since he explained that these resources are in the billions of dollars that countries fail to collect as a result of the tax fraud. “Each year we loose more than US $ 10 billion in tax payments, according to reserved estimates. Only in 2012, more than US $ 140 billion came out of Latin America as capital flight. So, there are resources… but this is a discussion that the elites of economic power are not interested in. We are on the verge of a tsunami of social unrest in the region if this logic is not reversed. It is time for governments to stop thinking about economic and fiscal policies for the benefit of the elites, as it is until now”.

Find below a translation of the “Continental Political and Social Policy Agenda for Justice in International Taxation” presented by Jorge Coronado (here in Spanish):

End the transnational corporate control over the global governance of taxation: