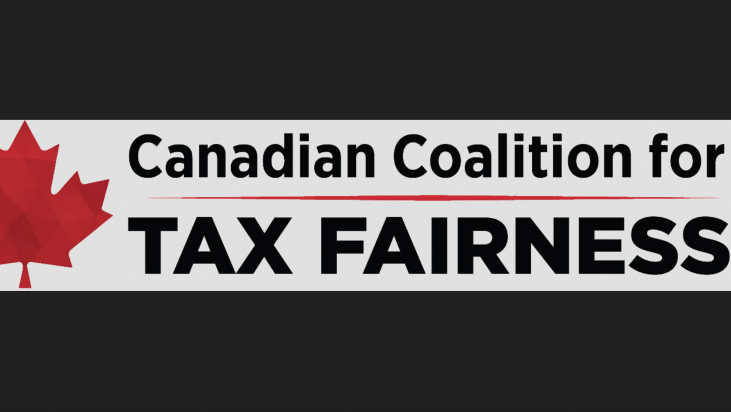 On September 18th, Groups representing over 4 million Canadians launched the Canadian Coalition for Tax Fairness, “in support of the federal government’s efforts to close unfair tax loopholes that allow some wealthy Canadians to reduce their taxes using private corporations”.

The coalition’s members include:

Membership is open and the coalition is growing fast.

”We represent Canadians concerned that high levels of inequality are dragging down our economic growth and wellbeing,” says spokesperson Diana Sarosi from Oxfam Canada, “Women are particularly impacted by the lack of funding for universal programs like child care.”  She adds: “Closing these private corporation tax loopholes is a positive and important step, but it falls short of a full tax fairness strategy.”

“This is a critical issue for all Canadians,” says Dennis Howlett from Canadians for Tax Fairness, “Unfair tax loopholes exacerbate inequality, undermine the integrity of our tax system and limit the ability of government to fund the social and physical infrastructure we need to ensure a healthy and fair economy”.

You can read the Coalition’s Joint Statement below in English, and here in French:

Unfair tax loopholes exacerbate inequality, and undermine the integrity of our tax system and the ability of government to fund the social and physical infrastructure needed to ensure a healthy and growing economy.

The private corporation loopholes that the government aims to close largely benefit the wealthy and create significant inequities in our tax system. The research clearly shows that the wealthy are far more likely than middle or low income Canadians to own a private corporation, and are far more likely to take advantage of these tax loopholes. This is also a gender issue; a disproportionate benefit of the loopholes goes to men while it takes money away from universal programs such as childcare. With $27 billion sheltered in passive investments to date, this is a significant public subsidy to the wealthy.

Although closing these private corporation tax loopholes is a positive and important step, it falls short of a full tax fairness strategy. There are many other unfair loopholes, such as those for stock options and capital gains that mostly benefit the wealthy and do not serve the broader public interest, while making the tax system overly complex.

We encourage the government to take substantial steps to further improve tax fairness and implement a broader package of reforms.  The money currently providing taxpayer-funded subsidies for the wealthy could be much better invested in poverty eradication, better public pensions for all, universal child care, long-term care for seniors, action on climate change, public education, community economic development, international development, programs for indigenous communities, agricultural research, or other measures that would build a healthy, growing economy”.

The coalition launch received a broad media coverage, e.g. in a The Tyee‘s article “Canadians Fed Up With Anti-Tax Rhetoric, Says Reform Advocate“.”Fair tax coalition, doctors offer support for government’s plan to close loopholes used by high-income earners” relates the journalist, quoting Global Alliance for Tax Justice’s treasurer Dennis Howlett, who says: “The public has grown weary of constant anti-tax messaging from business and conservatives and wants government to be able to provide decent services. The tax issue was dominated by the right wing for many years. Even the NDP was afraid to stand up to them. It’s time to change the framing”. Tax changes have “disproportionately” benefited the wealthy, Howlett said, while services have been cut. Now that the government is trying to restore balance, those affected are fighting the changes and misrepresenting the reality of the tax breaks, he said. The article also explains how a group of physicians from across Canada released a letter in support of the tax reforms.