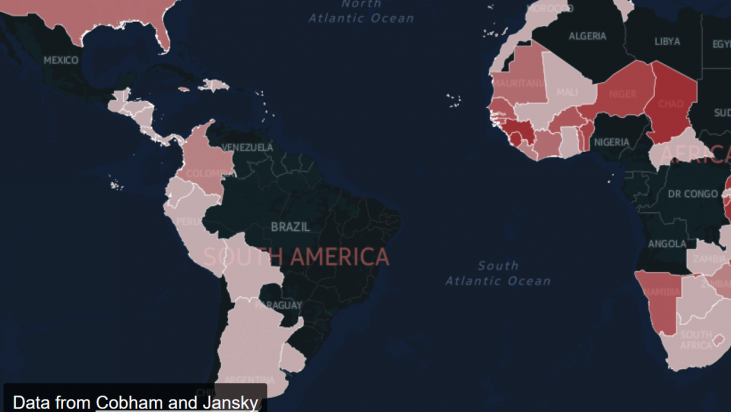 New estimates reveal the extent of tax avoidance by multinationals

New figures published today by the Tax Justice Network provide a country-level breakdown of the estimated tax losses to profit shifting by multinational companies. Applying a methodology developed by researchers at the International Monetary Fund to an improved dataset, the results indicate global losses of around $500 billion a year. The figures appear in a study published today by the United Nations University World Institute for Development Economics Research (UNU-WIDER, in Helsinki).

While this global total is more cautious than the $600 billion estimate of the IMF researchers, the distribution is also different. Losses are now estimated to be even more intense in lower-income countries in relation to GDP and as a proportion of total tax revenues. In addition, today’s estimates include the full country breakdown.

Profit shifting is the process whereby companies move profits from their subsidiaries in higher tax countries, where the real economic activity takes place, to other subsidiaries in ‘tax havens’. This is typically achieved by the multinational company setting up internal trades which exploit international tax rules to move taxable profits from one jurisdiction to another.

Profit shifting has been a big focus of international attention since scandals at companies like Apple and Amazon revealed the scale of distortions – and the systemic nature of avoidance schemes marketed by big 4 accounting firms was then laid bare in the ‘LuxLeaks’ revelations.

Tax Justice Network Chief Executive, Alex Cobham and Petr Janský of Charles University in Prague, carried out the analysis which recreates the methodology of a study published by researchers at the International Monetary Fund in 2016. Cobham and Janský replicate the IMF analysis, and then repeat it using a more robust source of national tax revenue data.

The data showed that whilst the largest losses occurred in rich economies such as the United States, lower-income countries were the biggest victims of profit shifting. Some countries, such as Argentina (4.42%) lost a significant proportion of their GDP to profit shifting. In Chad, the estimated losses to profit shifting were larger than all of the (non-resource) taxes collected in the country that year. In Pakistan the losses were 40% of tax revenues. While any estimates of this deliberately hidden phenomenon are necessarily uncertain, the order of magnitude indicates that the economic development of countries may in some cases be significantly undermined by the activities of multinational companies.

The calculated losses to individual countries can be seen in the interactive global map here.

A spreadsheet with the data can be found here.

The study was published as part of the WIDER working paper series.  A link to the full study can be found here.