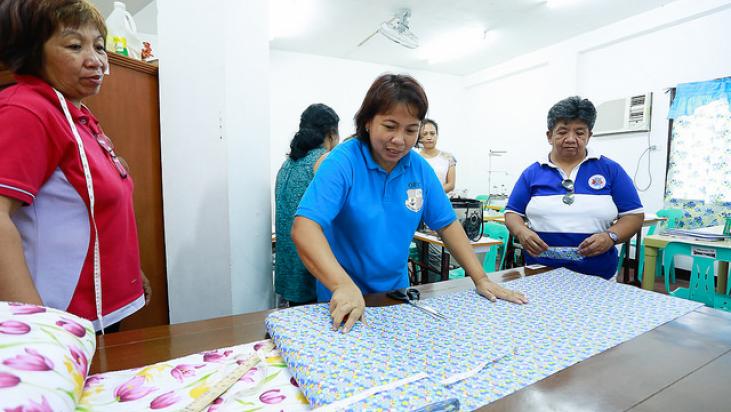 *A guest blog for the Global Days of Action for #TaxJustice for Women’s Rights, 8-24 March 2017

MANILA — With several tax reform packages now in the offing in the Philippines, tax seems to be on everyone’s mind.  Not for Aling Lina though, the woman who sells fried plantains daily at the street corner. She practically works 24/7, whether attending to household chores, or earning a living that on good days brings in barely $4/day. Besides, Lina tells me, she’s not “really” a taxpayer.

But she is, and so are millions of other women in the informal sector. Far from the grind and grime of Manila’s streets where Lina struggles daily to make ends meet, tax measures are being laid out that will shift a heavier share of revenue-raising efforts to them and the greater mass of consumers.

Differing only slightly, the proponents commonly push increasing exemption levels which would of course benefit income earners. But they are also agreed on giving corporations yet another break by cutting corporate income taxes from 30% to 25%, notwithstanding the many tax perks big firms already enjoy.

Here’s where small vendors such as Lina and the consuming public come in. To make up for the resulting revenue shortfall, VAT will continue to be levied but as a single 12% rate that will be borne by consumers. Exemptions and zero-rating, which would have cushioned to some degree VAT’s adverse impacts on disadvantaged groups, are to be largely done away with.

Other Asian countries such as Pakistan, Bangladesh and India have taken similar directions of either increasing VAT or adopting a uniform rate, and not without insistent prodding by the International Monetary Fund. It is argued that VAT quickly and efficiently raises revenue so cash-strapped governments in the developing world need to move away from taxing corporations and the wealthy. By the IMF’s logic, one must simply try harder to make VAT work.

Imposing the same rate on rich and poor alike, VAT is well-established as a regressive tax, and even more so when it is shorn of exemptions. This means that poor people spend a higher proportion of their incomes than the rich on VAT payments. The impacts are bound to be even graver particularly for women who typically earn less than men in most countries. Consumption-wise, poor women also stand at the losing end, as they tend to spend more of their limited earnings on VAT-rated household needs such as fuel for cooking, medicines, sugar, milk and edible oils.

What policy makers fail to recognize is that women are already heavily taxed through the endless hours they render in vital care work that sustains families, the work force and societies from one generation to the next. One author called this a “time tax” which serves “to reduce the time available for remunerative work, leisure time, and time for the education and health of women,” and “to trap the poor and particularly poor women in poverty—in both income and time poverty.”[1]

Taxpayers in more ways than one, women like Lina are hardly ever heard in the halls of policy-making, where decisions made affect their lives and their future. When millions of them fall through the cracks of gender-blind policy such as VAT, that’s not efficiency. That’s simply failure and lack of ambition to come up with policies that are not additionally burdensome for the poor and for women.

[1] Hirway, Indira. “Unpaid Work and the Economy: Linkages and Their Implications” (New York: Levy Economics Institute of Bard College, Working Paper No. 838, May 2015), 7.