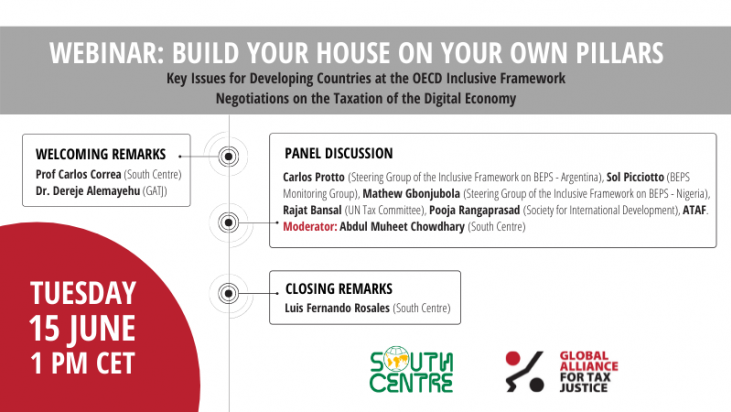 OECD-led Inclusive Framework: Behind Closed Doors And Outside The UN

As the OECD Inclusive Framework rushes to find a solution on the taxation of the digital economy within the next two weeks, the South Centre and the Global Alliance for Tax Justice (GATJ) hosted the webinar ‘Build Your House on Your Own Pillars’ this Tuesday (15 June), gathering prominent voices of the Global South to discuss key issues for developing countries.

“This is a timely meeting for two reasons: a few days ago, the G7 Ministers for Finance announced an agreement to set a global minimum tax of 15%, which is lower than the proposed by the Biden administration, and again this decision was made without the participation of the developing countries, outside the United Nations. It is also timely because the OECD Inclusive Framework wants to come to a solution on the taxation of the digital economy by July, and there is a need for the developing countries to get aligned to have their taxing rights recognised”, said Carlos Correa, Executive Director of the South Centre, during his opening remarks.

“We have been critical of the Inclusive Framework from the very beginning because we are worried that a global issue of huge importance is being negotiated and decided behind closed doors”, said Dereje Alemayehu, Executive Coordinator of the Global Alliance for Tax Justice, at the event. “We are worried such a process dominated and manipulated by the rich will not curb tax abuse and illicit financial flows from developing countries. In addition to being worried about its legitimacy, we are now increasingly worried that the Inclusive Framework has become Bermuda Triangle in which issues, concerns and proposals put forward by developing countries disappear. That is why we are calling developing countries to dare to say no to deals which will bring at best tiny benefits today, but would perpetuate the status quo in the long-term”, he added.

Since its creation, GATJ has been campaigning for a transparent, inclusive and representative global tax governance, which would only be possible as an outcome of an open and intergovernmental process at the UN, where all countries would have a seat at the table and equal say in determining international tax rules.

Carlos Protto, Member of the Steering Group of the Inclusive Framework on BEPS (Argentina)

“The central element of Pillar Two is the so-called GloBE [Global Anti-Base Erosion], which has two elements: the right for home countries of multinationals to tax undertaxed profits and the right for source countries, where activities take place, to tax undertaxed profits, but it proposes to give priority to home countries (…) Clearly a better solution needs to be found for the priority issue. If not, then I do not see any reason why source countries should join in a Pillar Two proposal.”

Mathew Gbonjubola, Member of the Steering Group of the Inclusive Framework on BEPS (Nigeria)

Pooja Rangaprasad, Director of Policy and Advocacy at the Society for International Development

“The Two Pillar proposal came from the North and their interests. Whatever the final package will be, it will be sold to developing countries as ‘we have five peanuts and now we will get 10 peanuts instead’. As long as we are in this process counting peanuts and we do not focus on how much revenue was lost over the decades and how much we will continue to lose in the Global South with this unfair system of allocation of taxing rights, the core issue will not be solved.”

You can watch the full video recording here.

The digitalisation of the economy has meant that companies no longer need to be physically present in countries to be able to derive profits from them. Goods and services can be provided online; this has created tax challenges as existing international tax rules require the physical presence of nonresident companies as an essential requirement for countries to be able to tax them. This phenomenon has been accelerated since the COVID-19 pandemic as more economic activity becomes digitalised.

The 139 member OECD Inclusive Framework aims to provide a solution to the taxation of the digitalised economy by July 2021, and no later than October 2021. The proposed “Two Pillar” solution currently being negotiated seems to be challenging and complex, and in many ways could be a paradigm shift for international taxation. It seeks to introduce a new taxing right in Pillar One focused on reforms to existing nexus and profit allocation rules, while Pillar Two is focused on a global minimum tax. The Two Pillar approach would also introduce new elements into international taxation, such as limited formulary apportionment, multilateral dispute resolution and the allocation of taxing rights through a multilateral agreement.

The new U.S. proposal under the Biden administration has implications for developing countries, as it reduces the scope of Amount A, from the existing 2,300 Multinational Enterprises (MNEs) to around 100. It also reiterates the call for ending unilateral measures and a ‘binding, non-optional dispute prevention and resolution process’. These need to be critically examined to ensure they do not harm developing countries.

In the meantime, the African Tax Administration Forum (ATAF) has submitted a revised proposal for Pillar One, putting in question many of the tenets of the proposal in the OECD Blueprint of Pillar One. It is only if developing countries align their positions that the solution reached in the Inclusive Framework could fully take into account the needs of developing countries.