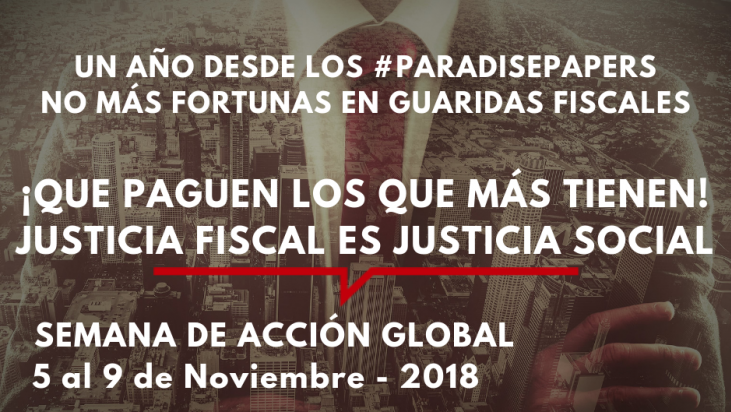 Online campaigning, one year after the #ParadisePapers

November 5th marked the one-year anniversary of the release of the #ParadisePapers – yet another high-profile tax scandal that highlighted the human impact of global tax dodging, exposing the wealthy individuals and multinational companies who dodge taxes. Organisations from every region around the world joined together to demand that our governments respond to #ParadisePapers by Making Multinationals Pay Their Share of Tax. Aside of the common banner, which was circulated in several languages, many regional, national and sectorial members and partners across the continents organised online campaigning activities:

In Asia, Tax & Fiscal Justice Asia (TAFJA) dedicated its monthly selfie challenge for tax justice and women’s rights, called #8for8 to the #ParadisePapers anniversary, calling for the stop of tax abuses of multinational companies in November. #8for8, an awareness-raising campaign in social media, was deployed by activists in different countries in Asia (including Bangladesh, India, Indonesia, Pakistan, Philippines, and Vietnam). Activists from Argentina, France, North America and Africa extended the mobilization, as well as civil society representatives gathered in Rome for the Financing for Development Forum in Rome. All those great photo petitions were posted on TAFJA’s Facebook page.

See more about the Global Days of Action on our campaign page #ParadisePapers One Year On!