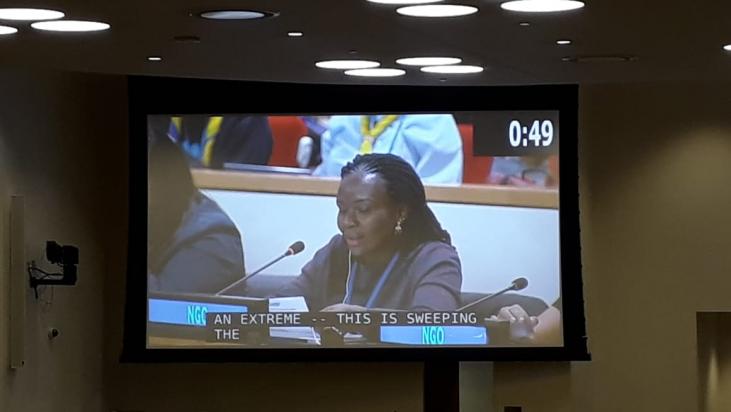 Speaking out for #TaxJustice at the #UNCSW63

As the curtain closes on the UN Commission on the Status of Women (UNCSW), the growing #TaxJustice movement is hoping to have #TaxJustice strongly included the final Agreed Conclusions.

We know there is still a strong narrative from International Financial Institutions on the privatization of public services, social protections and infrastructures to the detriment of the poor, especially women.

This is why, once more year, the Global Alliance for Tax Justice occupied the UNCSW, held in New York, to strengthen the #TaxJustice voice within the UNCSW and prove that #TaxJustice can ensure #WomensRights and #GenderEquality.

For this 63rd session, the Global Alliance for Tax Justice sponsored two parallel events, at the Church Center for the United Nations, with numerous partners

The panel, which was moderated by Caroline Othim, Global Policy and Campaigns Coordinator Africa & Co-convener of the GATJ Tax and Gender Working Group, included the following speakers:

The event counted with introductory remarks by Rosa Pavanelli, General Secretary of Public Services International, the global union federation for public sector trade unions and concluded with comments from the audience, the first of which coming from Irene Ovonji-Odida, a Ugandan lawyer, politician, and women’s rights activist who recently joined GATJ’s partner ICRICT, the Independent Commission for the Reform of International Corporate Taxation.

The panel, which was also moderated by Caroline Othim, included the following speakers:

The Global Alliance for Tax Justice also seized two opportunities to speak out for #TaxJustice in the UNCSW space:

In her statement, which you can download here, Kate Donald addressed the “elephant in the room”: “the current international tax system and illicit financial flows, including corporate tax abuses. This system and these practices are devastating to women, especially in poorer countries – but they continue to be propped up and facilitated by rich countries (many of whom preside over tax havens) and the IFIs”, Kate Donald said.

Kate Donald had applied to speak as one of the civil society responses/statements (through UN Women who administer and approve the speakers’ list for CSW). After her address, Kate asked the panel: “Where do we find the political will at the global level – for example here at the UN – to take on these systemic issues? Are the recent moves by the OECD, IMF and others to rethink the rules of international corporate taxation a step in the right direction?”

Several of the panelists replied directly to Kate’s point, agreeing that the global tax rules and system were very important to address.

“There is a desperate need for governments to step up, Othim said, and explore financing models that are truly transformative, address inequalities and advance gender and economic justice.”

“But where is the money?” She asked.

Caroline Othim closed her statement by reaffirming our global demands: “We demand that the CSW63 final resolution impel governments to:

You can find the video of the oral statement here, and a written transcript of the statement here in English, here in Spanish and here in French.