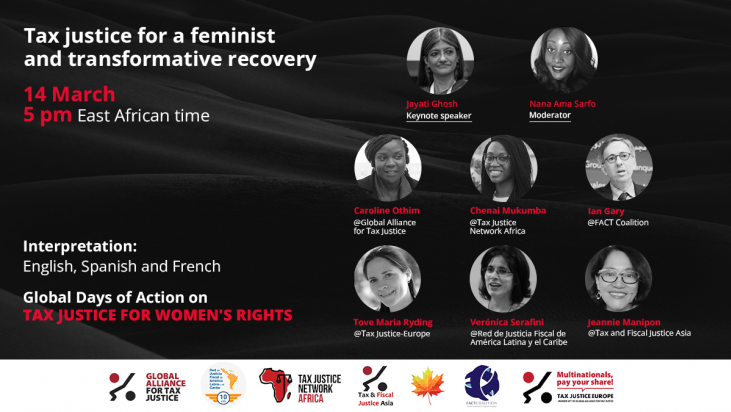 Tax justice for a feminist and transformative recovery

This Monday (14 March), the Global Alliance for Tax Justice (GATJ) has started the Global Days of Action on Tax Justice for Women’s Rights with a seminar that gathered representatives from its regional networks in a discussion on how to advance towards a feminist and transformative recovery through tax justice. The global campaign will take place until the 25th March, coinciding with the 66th session of the United Nations Commission on the Status of Women (CSW).

Regressive tax systems are an example. “In Latin America we finance social policies with indirect taxes, which have a disproportionate impact on women. It means we are taking resources out from the middle class and working class in order to give them social benefits and that’s not the way it should be. In order to have a more fair, equal and inclusive economy, we should do it otherwise”, warned Verónica Serafini, economist at Latindadd and the Red de Justicia Fiscal de América Latina y el Caribe, during the event.

“Now that countries – especially from the Global South – find themselves struggling to build back better because they don’t have the resources to do so for a number of reasons, the issue of illicit financial flows (IFF) is particularly pertinent. Countries are losing resources that they could be using to invest into their economies due to IFFs. It limits countries’ ability to use their own domestic resources as a tool for development, and to promote gender equality”, said Chenai Mukumba, Policy Research and Advocacy Manager at Tax Justice Network Africa (TJNA), who also integrated the round panel of the event.

According to Ian Gary, Executive Director of the FACT Coalition, who also participated in the event, the lack of tax transparency is also a big issue to advance both tax justice and gender justice. “We’re struggling with a lack of data about the problems. We have estimates about how much tax dodging is casting both developed and developing countries alike but very little information exists and is often privately held by tax authorities in developed countries”, he explained. “Over the past few years, there’s been a big movement to increase the availability of public country-by-country reporting (CBCR) of taxes paid by multinational companies. It is important to note that not only are civil societies demanding CBCR but investors are also demanding this information.”

Jeannie Manipon, Senior Programme Manager for Development Finance of APMDD and Co-Convener of the Tax and Gender Working Group of Tax and Fiscal Justice Asia (TAFJA), highlighted during her participation in the event the importance of addressing care work. “Care work – how it’s done, how it’s valued and who does it – is a very central theme in feminist economics. It looks at how care work is valued (or not), how it is distributed not just in the household but in larger economic units globally. Unpaid care work is an important area of study but also for feminist advocacy, when we think of how much women’s care work is unpaid because it is considered natural for women to cook and clean and care for the family. We see the gender division of labour in care work – unpaid but also paid – with women taking on the large share”, she said. “Feminist economics also looks at how in these processes economic and social power are distributed unequally.”

To shift the narrative and make taxes work for women, Ghosh highlighted the need to reform the global tax system as it currently enables tax abuse not only by wealthy individuals but also multinational corporations, which hits women and other vulnerable groups harder. “This happens in a process called “base erosion and profit shifting” (BEPS): it means that because a company has offices in different countries, it can choose where it declares its profits and shift them to low tax jurisdictions. Then all profits are concentrated in a small country where there are hardly any taxation requirements”, she explained.

She pointed out that a solution to stop tax abuse by multinational corporations is to stop treating them as separate entities in different countries, and ensure all countries’ taxing rights. In addition, in order to do this effectively, she mentioned the need for a global minimum tax rate. “After many years of negotiation, the Organisation for Economic Co-operation and Development (OECD) finally agreed to the principle of a minimum tax, but due to corporate lobbyists, the OECD lowered it down to 15% in a way that it’s almost meaningless”, she said. “We advocate that the global corporate minimum tax rate should be 25%. Half of the countries in the world have tax rates higher than 25%, and most developing countries have tax rates of 30% or more. This 15% is closer to the tax rate of tax havens.”

According to her, a low tax rate is just one of the issues of the OECD tax deal. Ghosh also criticised the fact that only the top 100 companies would be taxed with this proposal and the larger share of the collected taxes would go to developed countries. Besides “this 15% would force developing countries to lower down their rates – exactly the opposite of what we need”, she stated. “It’s very important for everyone who believe in tax justice and feminism to get together and prevent this from becoming a reality. Mobilise your governments to stop them from ratifying this proposal; mobilise at the regional level, the G20 and every possible forum to stop this from becoming something written in stone”, she called.

In this context, Tove Maria Ryding, Tax Coordinator at Eurodad and Coordinator of Tax Justice-Europe, said there is a growing movement for having an intergovernmental tax body under the UN and a Convention on Tax. “This proposal first came from the Africa Group in the United Nations. They put it forward in 2019 and then, a year after, it was actually included on a menu of options in the UN for what governments could do to tackle the COVID-19 crisis. It was also a key recommendation from the FACTI Panel’s report last year. So we have rolled out a proposal for what a UN tax convention could look like, which would introduce a forum where countries negotiate as equals”, she said, mentioning the proposal of a UN Convention on Tax launched last week by Eurodad, and supported by GATJ.

She continued: “The most important thing about the proposal is a solid and straightforward framework that links tax governance directly to international commitment that countries have taken to reduce inequalities, including gender inequality. The convention also includes full and effective participation of women in making tax rules, which would be very new.”

The GATJ, its regional networks and members of its Tax and Gender Working Group have been pushing for five demands to multilateral institutions and national governments:

A global campaign to make taxes work for women

The Global Days of Action on Tax Justice for Women’s Rights is a global campaign annually held by GATJ, its regional networks and members of its Tax and Gender Working Group. It calls for tax and fiscal justice to advance gender equality, and also aims to strengthen the tax justice and gender justice movements. “Through the Global Days of Action, we will aim to build solidarity not only among women, but also among different sectors across the world to effectively advance our shared message that urgent action for tax justice and gender justice is needed now”, highlighted Caroline Othim, Global Policy Advocacy and Campaigns Coordinator at GATJ.

The previous editions have been ground-breaking in mobilising tax justice and women’s rights activists and campaigners to work together. In 2022, in the context of multiple crises triggered by the COVID-19 pandemic, the 6th edition of the campaign is also looking to better understand the interlinkages between the climate agenda, gender equality, tax justice and care by highlighting the need for repairing our care for the planet.

Register for the next events

The GATJ will organise and participate in other two online events throughout the Global Days of Action, and the registrations to join them are still open.