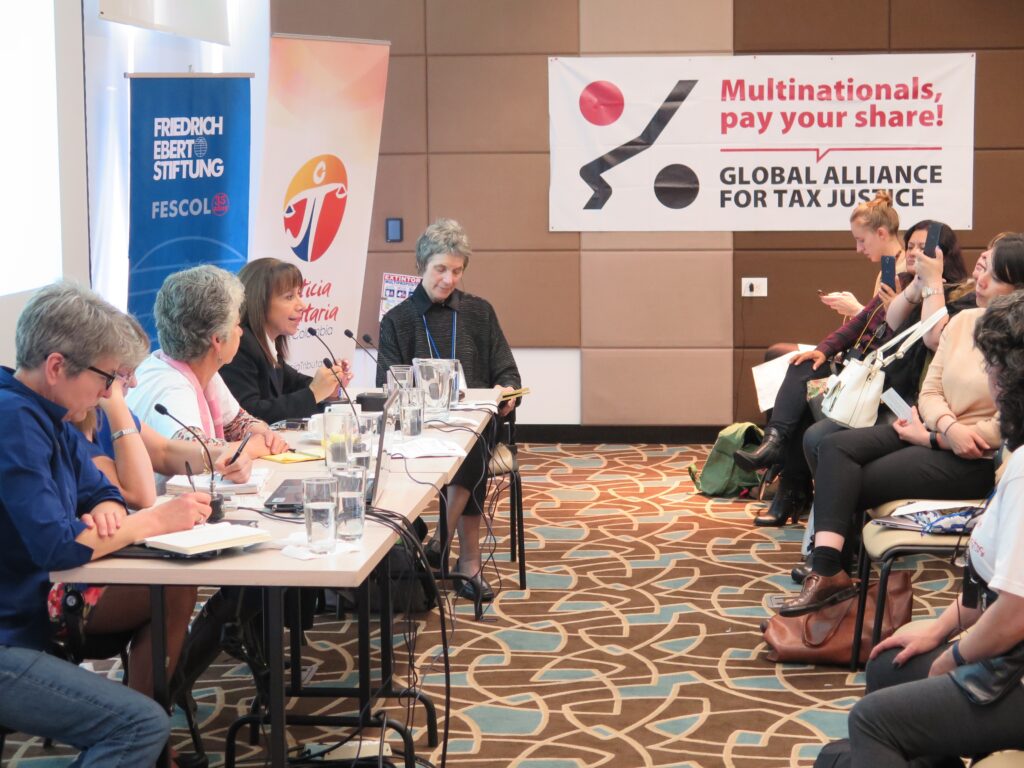 Women from across the world representing more than 25 countries, from the global South and the global North, congregated in Bogota, Colombia on June 13th, 14th and 15th to discuss the under-reported impacts of political decisions on taxation and financial secrecy on women and girls around the world. Hosted by Freidrich Ebert Stiftung (FES), the Global Alliance for Tax Justice (GATJ), Tax Justice Network and Public Services International (PSI), the conference brought together women’s rights and tax justice communities, the labour union movement and civil society in a global meeting of leading organizations, thinkers in this space as well as researchers and practitioners. The aim was to establish and to confirm powerful, common positions that will underpin concerted and synergized actions over the following years and to shift the narrative on tax justice for women´s rights.

The convening discussed a diverse set of topics on tax and gender outlining the gendered impacts, research and advocacy points of influence and charting the way forward with strategic solutions for carrying ideas, discussions and outcomes forward. Participants came prepared with case studies, engaged actively, built relationships and established a movement of tax justice for women´s rights.

The first Session had Rosa Pavanelli, Public Services International General Secretary, Jose Antonio Ocampo, Chairman of ICRICT and the Board of Colombia’s Banco de la República and Maria Nieves Rico, Director of Gender Affairs, CEPAL kick off discussions by highlighting:  their perspectives on the past and present trajectory of the movement; the relationship and tension between public and private (public services and corporations); engaging with grassroots movements and citizens organizations and a call to action/challenge to the movement to take up.

Kathleen Lahey of Queen´s University’s Faculty of law in Canada introduced a discussion dedicated to “Discriminatory tax regimes and their gendered impacts – domestic and international” and guided by TJN’s Liz Nelson around the following questions:

Public services provision through domestic resource mobilization was promoted in the 3rd session, with Randa Al Khalidi (PSI Jordan), Wangari Kinoti (ActionAid) and Mary Collins (European Women’s Lobby). Health, education, water, housing, transportation, etc. were studied from a gender perspective, which led to the care work issue: “Socio-cultural norms reinforce existing gender inequalities in care work and shape women’s engagement and opportunities in paid and unpaid care work, both formal and informal”, the panelists demonstrated. They explored its ideological underpinnings (a key element of capitalist and patriarchal systems and structures) and demonstrated that addressing this issue goes beyond better budgets.

The second day was centered on the advocacy needs to “equip and support” a well-informed movement and in order to bridge the gaps in knowledge, resources, and coordination?

Thus, its first session, titled Baseline 2017 was reserved for mapping the field in terms of collaboration between tax justice, development, human rights and women’s right movements.

The next session converged on identifying the resources needs for action, discussing some potential solutions at national and international levels and accompanying advocacy strategies and tactics. Moderated by Maria Fernanda Valdes, several case studies were presented:

The participants also learnt how to use Journalism for advocacy: How to work with media in general to illuminate a narrative, which aims to support policy change in the government and public space. Nurture and inform journalists working in the gender/human rights with the potency and relevance of tax justice issues.

Then collective intelligence was fostered to map key influence points, challenge/risk points and strategic goals to promote #TaxJustice for #WormensRights:  Research; Fora for strategic planning, advocacy, activism; Institutions, policy makers and organisations were among the items covered. Collectively mapping spaces for networks and continuously connect people, networks and resources was the core of a dynamic group reflection on how does a women’s rights framing strengthen #TaxJustice work, and vice versa. What do we do differently with this new framing, discourse, network and tools? The outcome of these strategy sessions is to be synthesised by a working group to inform a “Bogota Declaration on Tax Justice for Women´s Rights.”

This document will be circulated later, stay tuned!

The tax justice movement, global trade unions, civil society and the women´s movements are rewriting history by highlighting the impact of regressive tax policies and financial secrecy on women’s fundamental human rights and taking action to change the narrative.

Illicit Financial Flows is an issue that cannot be ignored by researchers, practitioners and policy makers because it has featured prominently in the SDGs, Financing for Development (FFD) 3, UN CSW and UNCTAD conference as a key financing issues that needs urgent redress mechanisms. The loss of revenue through IFFs negatively impacts on the ability of governments to invest in sectors that enhance equality such as education and health, which in turn hinders the women’s development agenda. The global convening provided an opportunity to strategically discuss IFFs and their gendered impact and implications on women and girls across the world, and amplify the voices calling for actions to curb the Illicit Financial Flows through concerted efforts.

Here is the link to the video of the convening.

You are  invited to join the discussion via Global Alliance for Tax Justice working group on Tax & Gender, in English or Spanish: please contact Caroline Othim for more information!