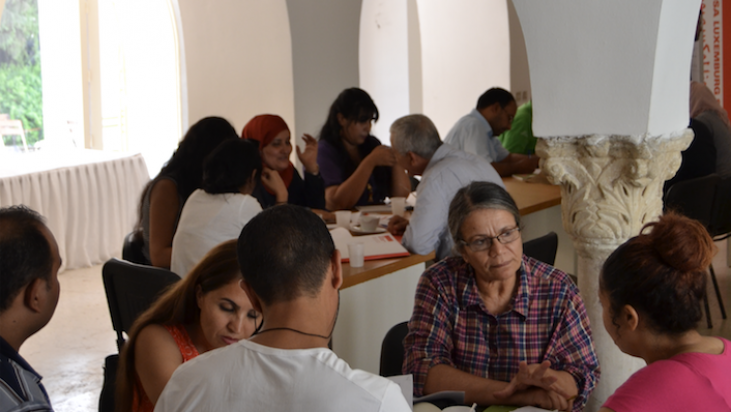 Tax Justice in a “choked Tunisia”

The Tunisian Observatory of Economy (TOE) was created after the Tunisian Revolution, by activists and researchers from different academic backgrounds – law, economics, architecture, etc.

TOE aims at reviving the debate around economics in the country, with a clear objective: demonstrate to a wide public that economic questions are often presented as too technical when it is in fact possible to actively take part in the discussion.

The Observatory’s activists started working on issues related to debt and debt audits and then came to tax and public finances questions and generally on political economy. Their work on how economic reforms are pushed by International Financial Institutions (IFI) aims at raising awareness, in the Tunisian public opinion and wider, on the mechanisms and impacts of structural reforms – and the role of IFIs.

The researchers mainly base their studies on official IFI and State documents, producing simplified briefs, which they circulate in various formats: infographics, visuals, short articles… The Tunisian Observatory of Economy also hosts monthly open workshops which gather students, journalists, diplomats, administration staff and researchers… Likewise, TOE’s researchers try and organise regular meetings in local universities, with experts and international networks members, in order to foster such a debate in the academia.

Their brief – though dense – publications are increasingly used by local and international media. Indeed, when Tunisia is facing large protests and uprising for weeks, TOE engages on questioning austerity measures, their impacts on prices, livelihoods and policies. Since the IMF pushed several Arab countries to implement or increase VAT – considered as the easiest tax to collect – The Tunisian Observatory of Economy meets civil society and #TaxJustice activists in distrusting both the fairness and sustainability of such measures.

Last January, Jihen Chandoul co-founder of the Tunisian Observatory of Economy, published an op-ed in the Guardian, titled “The IMF has choked Tunisia. No wonder the people are protesting”:

“As Tunisia has been facing protests across the country at price and tax rises since 3 January, Chandoul explains, it is impossible to understand this turmoil without understanding the role of international financial institutions, especially the IMF, in imposing austerity on Tunisia since the popular uprising of January 2011. A sense of injustice is growing, fed by the unfair distribution of the tax burden, the absence of a real effort to tackle tax fraud and evasion, the high unemployment level and the inequality of wealth in the country.”

“In the months after the revolution, Chandoul continues, western governments and institutions were looking for a way to prevent countries from questioning the neoliberal model. They found a solution at the G8 summit in Deauville, France in May 2011. (…) The Deauville Partnership has been a cornerstone of the economic reforms adopted in my country during the transition period, but also in other Arab countries like Morocco, Egypt and Jordan, with the IMF acting as the main driver”.

Jihen Chandoul’s op-ed was challenging enough to have the IMF directly “respond”, “recognizing the frustration of Tunisian people” but channeling all the same classical arguments: “Jobs and fairness will come with economic growth. Growth will come with improved business and investor confidence, which in turn will come once Tunisia can cut its deficits, and control debt and inflation”.

TOE just translated all 2017 publications into English and launched a new trilingual website, in Arabic, French and English, with all former publications to be translated throughout the coming year.