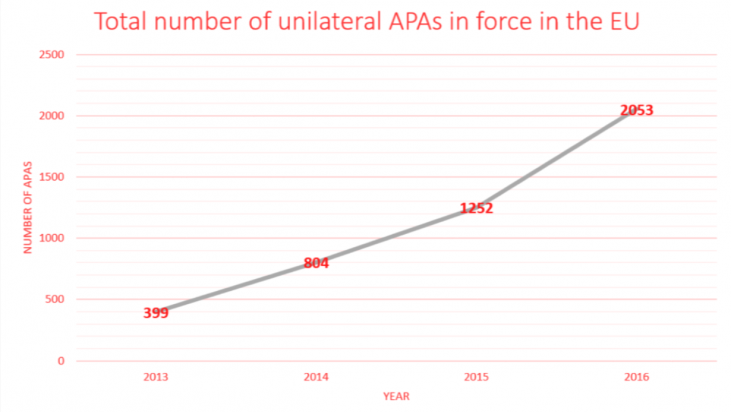 Tove Maria Ryding, Tax Justice Coordinator at the European Network on Debt and Development (Eurodad) just published a report on “Tax ‘sweetheart deals’ between multinationals and EU countries at record high”: Over the last few years, advance pricing agreements (APAs) – also known as ‘comfort letters’ or ‘sweetheart deals’ – have been at the centre of several tax scandals, as well as state aid cases that the European Commission has launched against EU Member States, involving alleged loss of millions of Euros in tax income.

But according to new figures released by the European Commission, the number of APAs continues to grow, and saw a sharp increase across the European Union from 2015 to 2016. In particular, the number of unilateral agreements – which are the most problematic kind – increased dramatically in EU countries, from 1,252 at the end of 2015 to 2,053 at the end of 2016 (an increase of 64 per cent).

”These figures are shocking, Ryding says. It seems that no amount of high profile tax scandals will deter some governments from making secret tax deals with multinational corporations.

“It’s positive that the European Commission has launched state aid cases to try and stop a few specific deals, some of which have cost us many millions of Euros in lost tax income. But with the number of deals increasing so fast, there is obviously no way the Commission can keep up. Furthermore, just like the public, the Commission has very limited knowledge about the actual content of these highly confidential deals”.

As part of a very harmful ‘race to the bottom’, some government engage in ‘tax competition’, to try and attract multinational corporations to their countries by offering lucrative tax arrangements. But international concern about these types of practices is growing. Earlier this week, the European Commissioner for Economic and Financial Affairs Pierre Moscovici named seven EU Member States as a cause of concern due to their aggressive tax policies. These were Belgium, Cyprus, Hungary, Ireland, Luxembourg, Malta and the Netherlands. Two of these countries – Belgium and Luxembourg – are at the absolute top of the list of countries that have the highest number of secret APAs in force. The Netherlands would also probably be very high on the list if they reported the number of APAs in force in the country.

The report ends with Eurodad’s recommendations on the matter:

“Keeping in mind that corporate tax avoidance is every year costing countries around the world billions of Euros in much needed tax income, the urgent need for action on this issue cannot be overstressed. As part of this, the growing trend of secret tax deals between multinational corporations and tax administrations must be addressed.

Corporate taxation should be based on clear legislation, rather than on agreements between individual corporations and governments. The best solution would, of course, be to replace transfer pricing legislation with a system that brings clarity and consistency to the taxation of multinational corporations. But until this happens, public information about the basic content of APAs and other advance tax rulings issued to multinationals is vital information for understanding the tax system we currently have. Furthermore, although the public can never replace tax administrators, scrutiny of public information by journalists and civil society groups, for example, can help identify cases where multinational corporations are engaged in questionable tax practices. More freely available public information would also allow tax administrators to openly share thoughts, insights and experiences with other tax administrators around the world”.