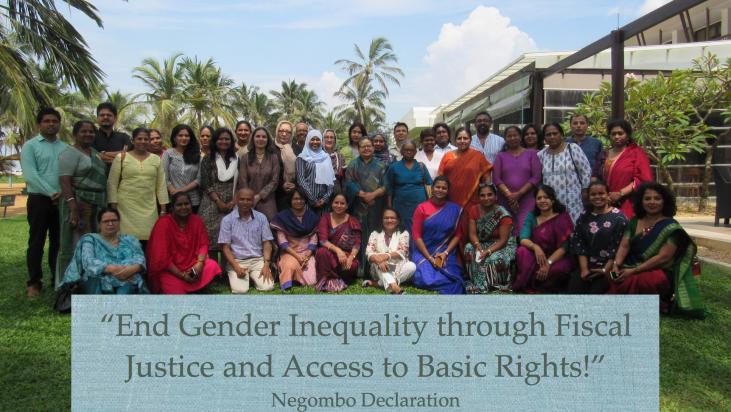 The Negombo Declaration has been presented on 20 November 2018, to “End gender inequality through Fiscal Justice and Access to Basic Rights!“.
The Declaration was the conclusion of the South Asian Women’s Convergence, held in Negombo, Sri Lanka, on 18-20 November 2018.

The Convergence attempted to understand ‘inequality’ as an overall development challenge in South Asia. Similarly, the gender dimension of economic inequality and access to basic services and their link to the fiscal policies were discussed and analysed.
The Negombo Declaration is the result of a South Asian process: more than 40 participants from Afghanistan, Bangladesh, India, Maldives, Nepal, Pakistan and Sri Lanka contributed, representing women’s organisations, political activists, mass organisations and networks, social movements and academia and also members of parliament.

The participants developed a short and long-term regional campaign plan to raise the question of gender inequality with a focus on fiscal policies.
The Convergence was concluded with the Negombo Declaration, that gathers demands and measures in order to fight these inequalities, and create a fair and equal society:

The Negombo Declaration also committed to take the following steps to pursue and achieve the goals expressed above: