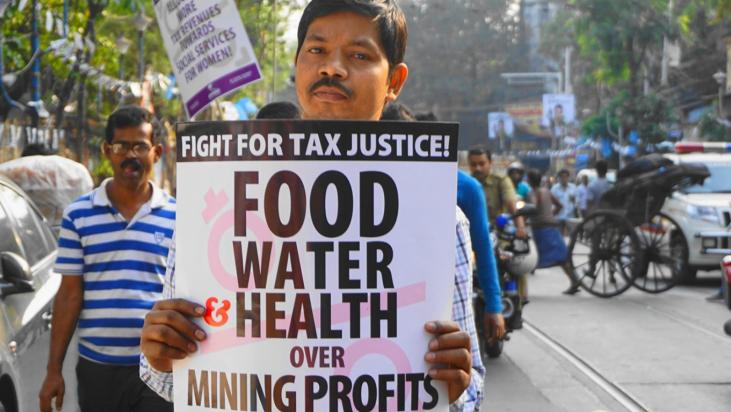 Towards Tax Justice in a Post-Pandemic World

An integral Part of The Struggle Against The Neoliberal Agenda

The COVID-19 pandemic has exposed sharp inequalities bred by a neoliberal system founded and thriving on profit and greed. Nowhere is this starker than in the Global South where multiple and chronic crises have reduced countries to poverty, increased their dependence on debt and eroded their resources and capacity to build humane and sustainable societies and economies. The pandemic today cuts an even wider swathe of human misery across the globe, with impacts disproportionately hitting the poorest and most vulnerable.

Deemed worse than the 2008 global economic crisis, the COVID-19-induced recession is anticipated to leave millions of people jobless and underemployed – more than the increase in unemployment and underemployment in 2008. The UN has estimated that an additional 71 million people will be pushed back into extreme poverty in 2020, which will be the first rise in global poverty since 1998. In Latin America and Africa, the earnings of the informal sector workers were estimated to have dropped by around 80 per cent in the first month of the crisis. Thus, economic survival will be a steeper uphill battle for the working poor in the Global South who are predominantly concentrated in the informal economy, dwelling in crowded slums, and living from hand to mouth on a daily basis even before the COVID-19 times.

Women are disproportionately affected by the pandemic as they are overrepresented in the unprotected, precarious and often neglected informal sector as well as in the most affected sectors such as healthcare services and the care economy. With the imposition of lockdown measures and stay-at-home policies, women face increased exposure to gender-based violence and the burden of unpaid care work are also intensified, reinforcing patriarchal norms in many societies. For instance, in Colombia’s capital, Bogota, the number of calls to the police’s 24/7 hotline to report violence against women increased by 225 per cent on the first week of the lockdown. In paid care work, women also comprise the bulk of the labor market in public health sectors, which suffer from budget cuts and low wages as states have withdrawn from social service investments over the past several years in favour of private sector investments.

The neoliberal economic system that preys on the vulnerable, privileges the wealthy, and puts profits over people created a fertile ground for the current crisis. Alongside loan conditionalities from structural adjustment programmes, macroeconomic policies that espoused austerity measures, and privatisation have dismantled the ability of countries, especially in the Global South, to cope with a crisis of this magnitude.

These have resulted in precarious and poorly resourced public health systems, inadequate social protection systems, and costly and inaccessible essential goods and services. In fact, in 2017, only between one third and one half of the global population was covered by essential health services, and heavily indebted poor countries spent only USD53.23 per capita on health in 2017. Meanwhile, as a sub-region, South Asia has the lowest per capita spending on health in 2017 at USD64.47. Hence, it is not surprising that in South Asia, medical supplies are deplorably insufficient, such as having less than 2.8 critical care beds per 100,000 people. Furthermore, many countries in the Global South are also lacking in adequate supply of ventilators, which are crucial in the COVID-19 treatment. To prevent contracting the coronavirus, everyone has been advised to frequently wash their hands. However, it is important to note that in 2015, 85 percent of the population in sub-Saharan Africa had no access to basic handwashing facilities with soap and water.

When the pandemic struck, the global supply chain that is designed to sustain the needs of the global market – including personal protective equipment, medical facilities, and testing kits – through the production hubs in the Global South has been severely disrupted. This has left many developing countries empty-handed not only in terms of revenues and investments, but also in terms of securing basic necessities that are vital in battling a pandemic and in providing humanitarian assistance to the most severely affected. Amid the broken global supply chain, the civil society and communities tried to fill the gaps. Community-based organisations and private individuals stepped in to produce face masks, donate personal protective equipment to hospitals, and respond to humanitarian needs of those who were left stranded, unemployed, and starving from the lockdowns.

Many governments have prioritised the private sector’s interests over peoples’ welfare and wellbeing for decades, rendering them inept and unprepared to address the current crisis. The export-oriented, private sector-led development model in many developing countries in the Global South has been grounded on the exploitation of cheap labour and extractivism of natural resources by giant corporations based in the Global North. As if these were not enough, tax policies that grant generous tax incentives and tax breaks were introduced to attract more foreign direct investments. The grave consequences of such macroeconomic policies are compounded by a broken international financial architecture that enables illicit financial flows, tax evasion, and tax avoidance by the wealthy elites and multinational corporations, severely undermining the states’ capacity to mobilise the resources required to invest in social sectors and sustainable development. Driven by greed and private gain, many corporations are still enabled to profit from the misery of the people under the current economic and political system even in the middle of the pandemic.

Billions of foregone revenues from tax incentives and tax abuses by corporations and wealthy individuals could have been used to strengthen essential public service delivery to ensure our rights to health, access to water and sanitation, decent housing, and sufficient mass transportation services. Such resources could have been utilised to mitigate the impacts of the COVID-19 pandemic. Yet, absent these resources, countries in the Global South heavily rely on aid and conditionality-laden loans. It should be underscored that even prior to the COVID-19 pandemic, developing countries have been buried in unsustainable debt – part of which is illegitimate.

The COVID-19 pandemic debunked the neoliberal doctrine that the states’ role in the national economy and in the provision of public goods and services for the welfare of their people should be reduced to a bare minimum. Amid the pandemic, there has been a public clamour for the states to intervene proactively and effectively not only in response to the public health emergency, but also to the immediate and looming impacts of the economic downturn brought about by lockdowns and the cessation of economic activities. The discontent of the people on the ineffective government COVID-19 responses led to the eruption of protests in different parts of the world. “Stop Bolsonaro!” slogans echoed online and on the streets of Brazil, one of the worst hit countries by the COVID-19, to condemn the President’s mishandling of the crisis. In Kenya, citizens marched to denounce the police brutality in enforcing the lockdown regulations. The situation is similar in the Philippines where a number of protesters, quarantine violators, and even ordinary citizens were arrested, violently attacked, or killed by the state forces. On top of the crumbling economies, collapsing health systems, and deepening poverty, the people are also faced with shrinking democratic and civic space and increasing political repression, which makes pushing for reforms more challenging than ever.

However, in the recent months, we have seen that the underlying principles of the neoliberal ideology and undemocratic governance are being discredited and put into question as we confront a grim economic crisis. The COVID-19 pandemic presents us an opportunity to push for systemic changes and to create alternatives to the current neoliberal development model that values the people and the planet over profit and greed. It creates an opportunity to reimagine a global economy and international financial architecture that is anchored on social justice and substantive equality, which is not possible without tax justice.

In this regard, we strongly urge the following of governments:

On stopping the erosion of public financial resources

On the reform of the global tax rules and architecture

To alleviate the economic burdens of the poor and the vulnerable, we also urgently demand the governments to:

There is no tax justice without fiscal and economic justice. We call on states to uphold their core mandate and duty to protect and aid their people and give primacy to human rights — not banks, corporations, and the rich — and:

In the current situation, social movements face restrictions and repression to mobilise and resist unjust policies. Yet, this must not deter us from consolidating our ranks to be able to fight for a just and sustainable future. As a global alliance with members in five continents, we see this crisis as a turning point for a broader civil society mobilisation and the rebuilding of a global movement against failed neoliberal economic policies. Now, more than ever, is the most crucial time to unite and reinvigorate our struggle for tax justice and a people-centred economy!