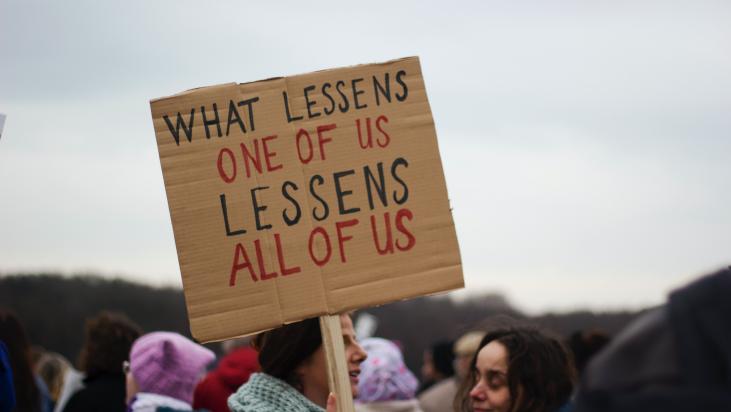 Taxes Are a Matter of Human Rights

Whether you are in Latin America, Africa or Asia, there is one thing that all the countries experienced in these last few months — the COVID-19 crisis exposed and aggravated existing inequalities. The entire planet is affected but the countries in the Global South, especially women and vulnerable groups, were hit harder. As we all struggle to sort out this socioeconomic crisis, leaders in feminist economics warn: to fulfill human rights, we need a fairer and more transparent tax system.

Veronica Serafini (Economics and Gender Specialist at LATINDADD), Hoang Phuong Thao (Country Director of ActionAid Vietnam), Leah Eryenyu (Research, Advocacy and Movement Building Manager at Akina Mama wa Afrika) and Kate Donald (Director of the Human Rights in Economic and Social Policy Program at CESR) joined us in a webinar organised by our Tax and Gender Working Group and the WWG on FfD this Wednesday (1 July) to discuss the importance of a fair taxation for a gender-just and equitable development. Moderated by Caroline Othim (Africa Campaigns & Policy Coordinator at the Global Alliance for Tax Justice), this session was part of the webinar series Macro Solutions for Women, the People and the Planet, promoted by WWG on FfD.

“Taxes raise the money we need to spend on public and social services. They also help to redistribute power and resources in the first place. This proposal for a fair taxation is in line with international human rights laws”, explained Donald.

If a country does not have the necessary public funding to provide their citizens with quality public services, women are more likely to be negatively impacted. Serafini said that “the coverage of social security in most countries of Latin America is low, and women are particularly affected”, as they have less access to formal jobs, decent remuneration and, therefore, less conditions to afford private services.

Besides, the lack of adequate public services puts women’s economic autonomy at stake due to their disproportionate burden of unpaid domestic and care work, which is a lot higher than men’s. Think about this scenario: If a woman can not count on a public daycare and has to be full-time responsible for her children, her working hours will be reduced, together with her remuneration. “Our recent research in Vietnam shows that when public services are available, the number of hours that women spend with unpaid care work is much lower. In some areas of the country, women spend 9 hours per day with it”, shared Hoang Phuong.

Tax exemptions for corporations are a frequent practice to try to circumvent the lack of public funding. Governments claim that these practices would bring economic growth, but the fact is that they only make room for illicit financial flows and create opportunities to shift the burden to the most vulnerable. “The story of Africa is a story of a continued exploitation, but not for the benefit of the people on the continent, but rather for the communities and economies in the Global North. Illicit financial flows are coming out of criminal activities, but the bigger story of IFFs is a story of tax evasion, tax avoidance from large corporations”, affirmed Eryenyu.

What We Don’t Know Will Actually Hurt Us More

It is no coincidence that it is so difficult to access information about the financial system. It is quite advantageous for the minority who is in the control of it. Eryenyu mentioned during the webinar a recent example revealed by the Luanda Leaks, a project of the International Consortium of Investigative Journalists (ICIJ) which exposed two decades of corrupt agreements that made the entrepreneur Isabel dos Santos — daughter of the former President of Angola, José Eduardo dos Santos — the richest woman in Africa and Angola, a country rich in oil and diamonds, but one of the poorest on Earth.

“Of course when I talk about people fueling wars using minerals, for example, it is easy to point it out as criminality. However, when we contrast it with Isabel dos Santos, who’s wearing a nice suit and goes to all those banks in the Global North to basically clean up her money, then the respectability makes it look elsewhere”, she said. “It’s so interesting that the investigations showed that most of the countries where Isabel dos Santos had her businesses are the ones who had really strong laws on transparency and money laundry, and yet her businesses were successful. It shows us how difficult it is to track illicit financial flows.”

Eryenyu shared another example of lack of financial information in Uganda. As the country’s natural resources are taken away in exploitation activities and the population can not benefit from them, the government ends up without the public funding needed to fulfill its citizens’ rights, so appeals to debts. According to Eryenyu, debt services occupy the top 3 in Uganda’s budget priorities, long before education and health. “Why don’t we have this information about Africa as a net creditor?”, she asked the audience. “The thing about power is that it’s very exclusionary. It controls and also excludes people from having the knowledge of such things.”

Without the knowledge about the financial system, the population can not call for any changes. Eryenyu highlighted that “consciousness raising is one of the most important things” and that “we need to make people aware of what is happening, so they are able to demand an end to these kinds of practices”.

How To Improve Our Tax System: Make It Work For All

First of all, the speakers support the establishment of an inclusive intergovernmental Global Tax Body in the United Nations, where all countries have a seat at the table and equal say in determining international tax rules. That would strengthen the cooperation between tax administrations and open space to a real healthy business environment, by ending the race to the bottom and encouraging a global action to improve our current financial architecture so that it is positive for all countries.

“Unfortunately we are in a situation where the Global South countries have very limited fiscal and policy space, so even if they wanted to implement more progressive taxation or tax corporations more highly, it would be very difficult for them to do so because of the rules imposed by the Global North”, said Donald.

According to the speakers, strengthening international cooperation on tax would help us curb illicit financial flows (IFFs) and loopholes that facilitate tax avoidance and are biased towards wealthy countries, corporations and elites. These practices have been depriving governments around the globe from the revenue needed to finance especially social and economic rights for women and girls. “For me, curbing IFFs is a decolonization project”, said Eryenyu.

Another proposal is to adopt progressive and gender-responsive tax and budgetary expenditure. Currently consumption taxes (such as Value Added Taxes) and austerity measures only reinforce income and gender inequality by placing the tax burden on those who are least able to pay it and with the least economic security. If who earns more payed proportionally more taxes, we would be able to reduce unfair tax burdens and discrimination on women and disadvantaged  groups.

“In Brazil, for example, even when it had very progressive social programmes (before the current administration), most of the taxes to keep these social programmes were coming from the poor sections of society, which totally undercuts the goal of redistribution”, mentioned Donald.

Leaders in feminist economics also work to ensure tax and fiscal policies serve to recognise, represent, reduce and redistribute unpaid care and domestic work and increase allocation of tax revenues for gender responsive public services. “The tax system is not gender neutral. Evidence shows that the consequence of these problems affect women in particular”, reminded Serafini. When governments do not assess their tax system from a gender perspective, it is gender-bind and reinforces existing inequalities.

The speakers pointed out that taxes are the most sustainable source of government revenues, so in the end the proposals for a reform in the global financial architecture aims to ensure all the countries have the necessary public funding to provide their citizens with quality public services and climate initiatives.

“It’s important that we ensure public investment in public systems. Up to now, nobody died in Vietnam due to the Covid-19 thanks to the consistent investment of our government in the public health system, especially in the prevention. We are lucky because investments like these in public services are not made in most countries”, mentioned Hoang Phuong.

“A feminist approach to tax policy also means to make taxes work for disadvantaged groups — black people, trans people, indigenous people, people with disabilities, immigrants. We really want to use tax and fiscal policy to tackle the systems of oppression that we are up against, such as patriarchy, racism, white supremacy, colonialism”, highlighted Donald.

Established in 2016, the GATJ Tax and Gender Working Group aims to strengthen the global integration of tax justice and gender justice organisations. With representatives from all the GATJ regions and committed partners and allies, the group collaboratively advocates for a reform of tax and fiscal policies and decision-making processes to achieve social and economic change for women’s rights. Co-coordinators: Caroline Othim (Africa Campaigns & Policy Coordinator at the Global Alliance for Tax Justice) and Roosje Saalbrink (Policy and Advocacy Manager at Womankind Worldwide).

The Women’s Working Group on Financing for Development (WWG on FfD) is an alliance of women’s organizations and networks who advocate for the advancement of women’s human rights and gender equality in the Financing for Development related UN processes. Co-Conveners: Rosa G. Lizarde (Global Director of Feminist Task Force) & Emilia Reyes (Programme Director at Gender Equity: Citizenship, Work and Family).