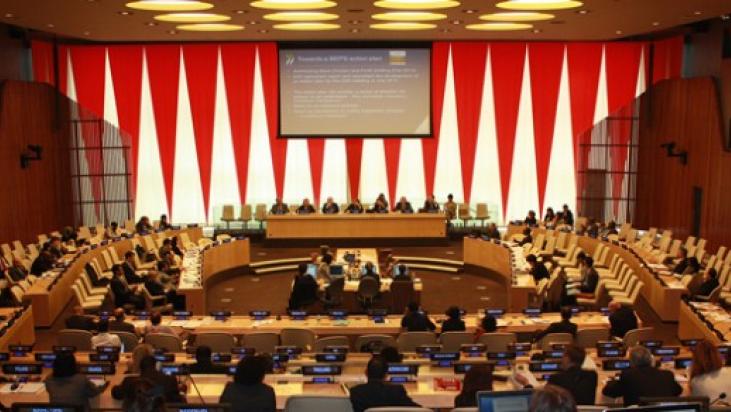 Eurodad’s Bodo Ellmers just published an article, as a wrapup of civil society’s analysis of the Financing for Development Forum that took place in New York.

“Last week’s United Nations’ Financing for Development Forum in New York was notable for being the first major event to admit in a formal outcome document that at the current pace, the Sustainable Development Goals will not be reached, Ellmers writes. The Forum – which deals with all aspects of finance and the financial architecture that regulates finance – planned to push reforms that would make finance work for development. Progress was meagre however, as political blockages still need to be overcome.

The outcome document of the 2017 Financing for Development (FfD) Forum paints an alarming picture: “The current global trajectory will not deliver the goal of eradicating poverty in all its forms and dimensions by 2030”. A key reason is the lack of adequate funding for the SDGs. While there is no lack of ‘hot money’ inflating asset prices and speculative bubbles across the globe, there’s a failure to transform that money into development finance, not least because governments are failing to reform the financial system. The 2017 FfD Forum pledged to take “immediate action … to implement the Addis Ababa Action Agenda” (the commitments made at the last International Conference on Financing for Development two years ago), but it’s unclear exactly what the substance of that action will be”.

Concessional finance: fighting for a slice of the cake

“The access to concessional financing is one issue that divided developing countries and prevented the Group of 77 and China from building a more effective common front on more substantial issues. The total amount of aid grants and subsidised loans is obviously limited, even more so as most donors countries fail to meet the internationally agreed target to provide official development assistance (ODA) to the tune of 0.7 per cent of their GDP. Different developing country groupings have started to fight for the crumbs of the cake – while Least Developed Countries (LDCs) stressed they need more of it, a number of countries in special situations (such as the Small Island Developing States) and even Middle Income Countries also stressed their desire to have access to more concessional finance.

This gave the EU, represented by Development Commissioner Neven Mimica, the opportunity proudly to present itself as the world’s largest donor, avoiding the need to address the more difficult EU performance on policy coherence issues. One such issue is certainly that the EU’s new External Investment Plan places a strong and controversial focus on private sector activities and finance. Many participants stressed that ODA won’t be sufficient to finance the SDGs, and resources beyond ODA will also need to be made SDG-compatible”.

“The paragraphs of the FfD forum’s conclusions dealing with domestic public resources devote a lot of space to mapping all the various tiny and fragmented initiatives that were set up following Addis, in order to find a compromise solution to the lack of an intergovernmental body on taxation. The need for a global tax body was stressed by many, including by a large number of CSOs and by Ecuador as representative of the G77 and China – the group that represents the vast majority of UN Member States”

Ellmers analyses several other points, e.g. how private investment becomes “the new manna from heaven to save the SDGs is private investment”, providing “few sticks, lots of carrots”. He ends up on a more positive note, stating how “the FfD Forum and its conclusions did devote more attention to cross-cutting issues such as financing and safeguarding social protection and gender equity – but effective action remains a work in progress”.

You can read the full article on Eurodad’s website.